10th Avenue (On The Edge of South Tucson)

SUPER South 10th Avenue
By: Jerry Peek
One good spot for a quick mural overload is on South 10th Avenue, just as you cross into the city of South Tucson at 25½ Street. (From 22nd Street in Tucson, turn south at the light onto 10th Ave.) They're everywhere: on your right and your left, and on a couple of side streets too. So, drive slowly or park on a side street and walk back for a closer look.

First, on the left (the east side), is this collection of food and beverages -- possibly intended to start you thinking about all of the restaurants and taquerias farther south, after 10th turns into 12th:

Half a block farther, at 26th: the sun, the moon, and a star — by Carlos Valenzuela:

The Tucson Electric Power substation at 27th has a full block of wraparound mural. Here's some of the show -- including three pirate ships whose captain, I think, was named Columbus: 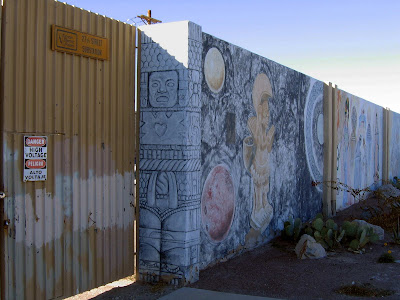 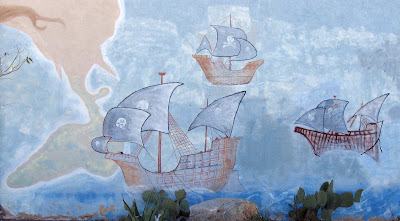 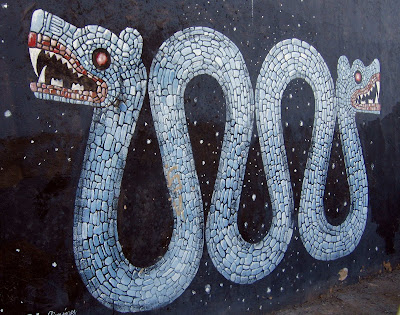 Galloping horses at 27th, and floating lots-of-things at 28th:

There's more! But I'll leave that for you to discover... and wrap this up with a way to (partly) wrap a mobile home in a mural -- including a saguaro, and many saguaro blossoms -- at the corner of 10th and 36th: 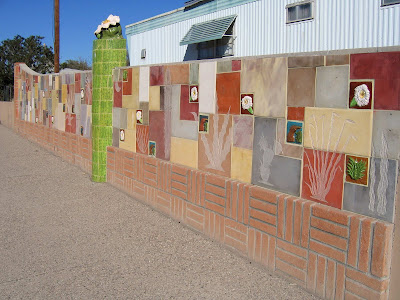 Update (October 1, 2014): A July 23, 1994 article in the Tucson Citizen, Cultural Art, covers murals along this section of 10th Avenue and has quite a bit of information about Antonio Pazos' mural at the Tucson Electric Substation on 27th Street.

MEAT Me in Tucson! 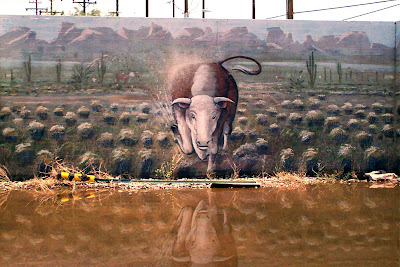 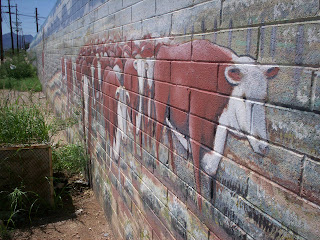 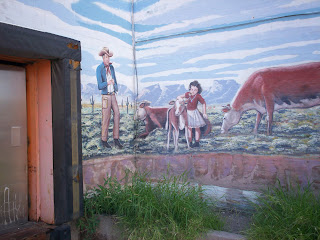 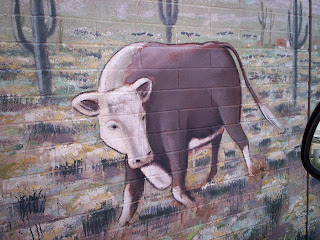 This is a massive mural that spans a couple of hundred feet. You'll find it at 1102 W. Grant Road, just east of I-10. As I recall, there was also some graffitti at the rear of the building that was somewhat detailed, although it had nothing to do with the cows and cowboys of the Farmer John's Meats mural.And that's no bull! (Sorry, couldn't resist)

Erik S. e-mailed the location of this wild west mural. This one is located at the intersection of Grande and Congress. "The desperados are on the northeast corner [it used to be a bail bond office, note the lady with the bag of money]," Erik wrote.

Thanks, Erik!
Randy
Posted by Randy Garsee at 7:39 PM 5 comments: