I used an exclamation point on the title because the murals here are overpowering: big, bright, and almost everywhere. This charter school looks to be preparing its students for a career — including one in art. You can see a list of school businesses in the sign at the left. (As always, you can click on the photo for a larger view.)

A lot of these murals are not painted on; they're "wraps," applied with what looks like a printed film of some sort by s student business at the school. But there's plenty of paint, too.

We showed one of the murals here a year ago in Flaming mural on 22nd. That's at the west end of campus, at the school's auto shop. Around the corner is the entrance to the shop, with cars painted on the doors:

(I took the second photo on April 8th.) That name GatorEyez comes from the school team name, the Compass High School (Navi)Gators. (“Compass navigators”... get it? It took me a little while.) 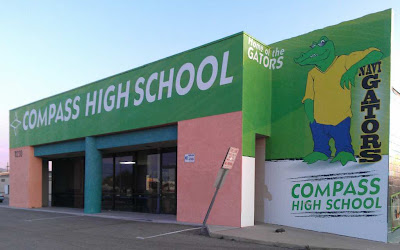 On the right side of that building, next to the auto shop, is a mural with five scenes from the school: 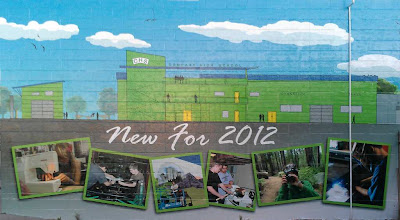 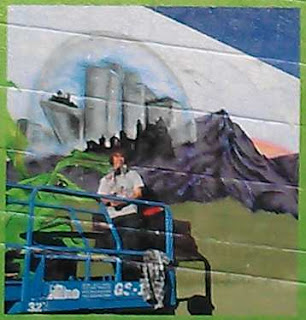 I'm not sure that the middle of the five photos is actually from 2012. A staff member told me that the photo shows the student who painted the huge mural on back of the school; he's standing on the lift that he used to reach the top of the wall. The mural has been there for a while — long enough to be covered by a couple of storage sheds (there was nowhere else to put the sheds, the staff member told me). Here are shots from three angles: 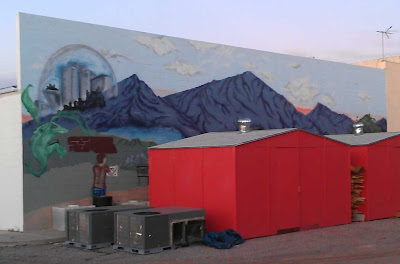 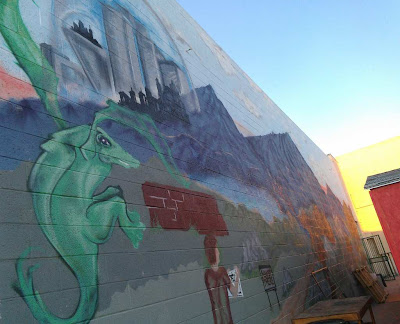 (While you're waiting in line for the Arizona emissions testing facility, look to your left to see that mural.)

On my first visit, January 10th, there was a mural in the outside hallway in front of the art studio. This mural was gone when I came back on April 8th: 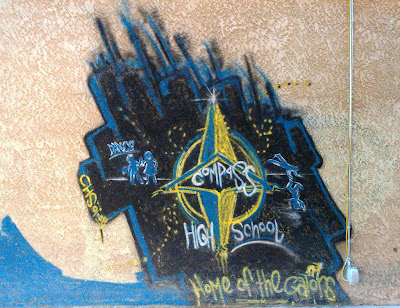 Last, here are the “wraps” on the buildings around the northeast-side parking lot: 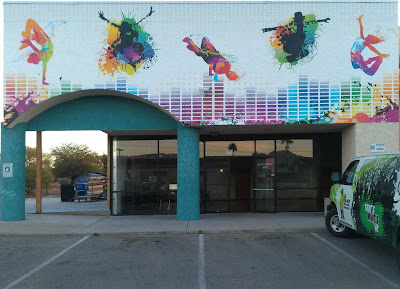 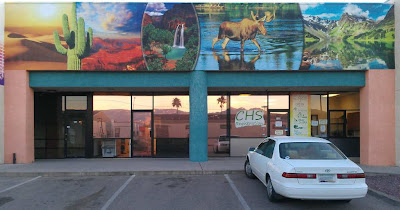 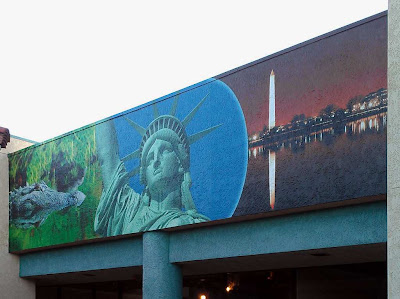 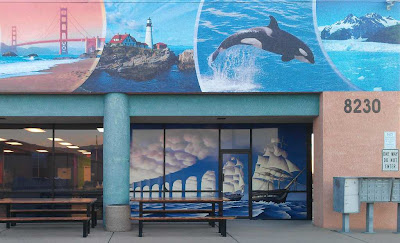 This dark desert scene is on a wall facing the garden at 2202 S. Kelvin Stravenue. I found it on January 17th.
Posted by Jerry Peek at 12:01 AM No comments:

Sunday (the 24th) I saw a notice in the Arizona Daily Star's In Memoriam section for Brandi Michelle Fenton. She was born on that day in 1989. I remembered that I had photos of the wonderful little park near the Rillito, dedicated to her, filled with mosaic murals. The photos (which I took on December 8, 2011) were just coming up in my long backlog of mural photos... so, here they are!

As the park's Pima County web page says, “Brandi Fenton Memorial Park is the result of a unique partnership between public and private sectors. The Fenton family initiated a public-private partnership to help fund and develop the park, in memory of their daughter.” Even if you aren't a mural lover, this place is worth the trip to see. Let's start with the plaque showing Brandi and the park's story: 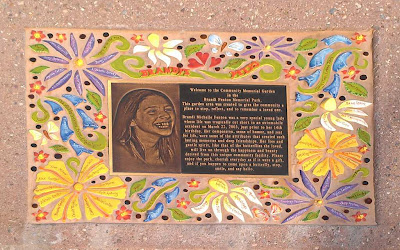 Near the entrance to the garden area is a mural with safe driving tips. (Brandi lost her life in a car accident during March 2003.) 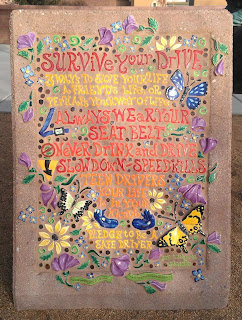 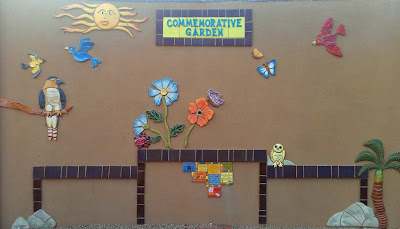 The "Tree of Life" wall on one side of the fountain: 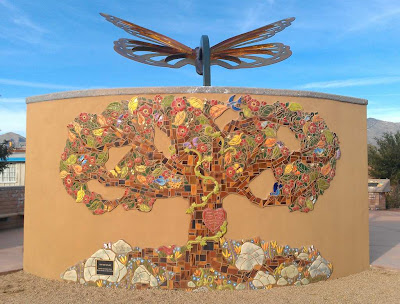 A bench with a mosaic mural on the top dedicated to Jose Luis “Guapo” Rincon, and the mosaic on one end for Herb Carson... 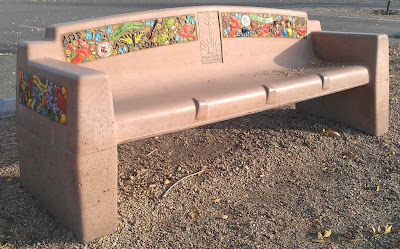 ...and the other end, with several names:

Tne top of another bench, a memorial to Casey Allyn Gosnell:

And two thank-you murals for contributors: 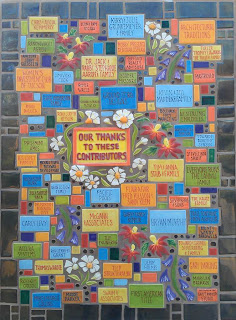 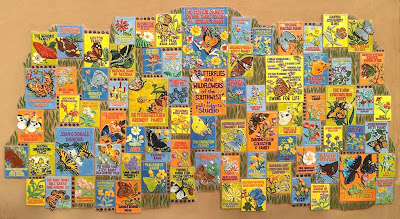 You can read more about the park on the JewishTucson.org website, Pima County park memorializing Jewish teen is community-wide effort. And here's a map.

By the way, for some reason, the official address of the park is on River Road (it's at the bottom of this page), and Google Maps will show you the middle of the park if you click on that address. But the park actually stretches from the southwest corner of Alvernon and Dodge, and the clubhouse is near that corner.

Update (March 5, 2018): For photos of the rest of the Community Garden, visit the Tucson's Pocket Parks blog and see the entry Brandi Fenton Memorial Park.

Murals from around the world

Tucson has some great muralists. You can find them here every couple of days or by searching local news (see our December 15, 2011 post for some suggestions).

Outside Tucson, Google follows the latest mural news. Check the "Murals in the News" section in the right-hand column of this blog.

I've seen some great websites and blogs with street art from around the world; one I found today is StreetArtNews.net. (The home page keeps getting longer and longer as you wait. You might try clicking there, then going for a cup of coffee and waiting a few minutes before you scroll down.) Don't miss their wraparound mural in Namibia — and imagine going past it yourself as drive around that corner! (Reminds you of Eadweard Muybridge's animal locomotion photos, doesn't it?)

There's a new building along the Thames River in London called The Shard. The 360-degree view from the top is like a non-stop mural.

If you have any favorite mural sites, you can share them by leaving a comment at the end of this post. Thanks.
Posted by Jerry Peek at 12:01 AM No comments: 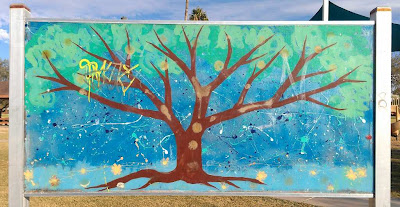 Nice idea to paint a mural on the back side of an information sign! This is at the east edge of the west-side parking lot for McCormick Park, along Columbus south of Blacklidge, on Thanksgiving Day (November 24), 2011. It's sad that the tagger wouldn't leave it in peace.
Posted by Jerry Peek at 12:01 AM No comments: 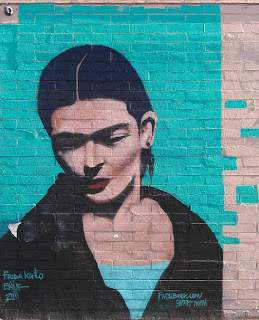 This portrait of Frida Kahlo is by Francisco Enuf Garcia. The photo is the east wall of Carnicería La Noria, 704 E. Prince, on November 16, 2011. The bottom left is signed

and the bottom right has his Facebook address www.facebook.com/grafftruth.

Update (December 20, 2012): When I stopped by on October 2, I saw that the paint on the mural is peeling. (Actually, paint on other parts of the wall was peeling the same way. Unfortunately, the mural is painted over that poor base paint, so it's falling apart through no fault of the muralist's. I emailed him to let him know. How heartbreaking.)

I stopped because I saw a new mural just west of here.
Posted by Jerry Peek at 12:01 AM No comments: 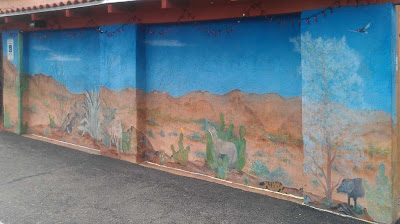 Out West at Tiny's 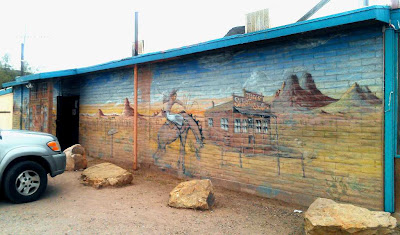 I also went inside to chat with students and instructors in that evening's class. They've done a lot of public art in Tucson! Some of it is on this blog. Some is on their website. I'll post more here as time goes on.

Update (February 7, 2017): I've just put another mural online. It should appear March 13th. After that, you can see it at Santa Theresa Tile Works re-revisited.
Posted by Jerry Peek at 12:01 AM No comments: 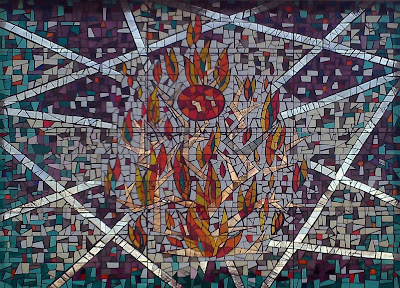 This mural is above the north entrance of Temple Emanu-el, 225 N Country Club. I took the photo on November 3, 2011, before the big solar panels were installed over the parking lot.
Posted by Jerry Peek at 12:01 AM No comments:

This photo shows the entrance to the home on the northwest corner of Blacklidge & Jackson on October 31, 2011.
Posted by Jerry Peek at 12:01 AM No comments:

Back in 1999, Eco-Kids (part of Americorps) made a mosaic-covered two-sided mural "Reduce, Reuse, RECYCLE" along Nogales Highway, across from El Rio Community Health Center, near the recycling storage area in Rudy Garcia Park. The mural oozes from the vertical part onto the flat part and runs off the edges... a fun design.

Here are the north side, the south side (with shadows from the nearby fence) and the group's signature on the southwest corner: 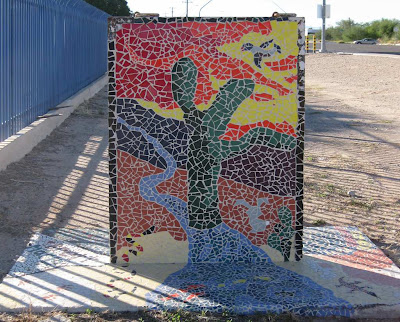 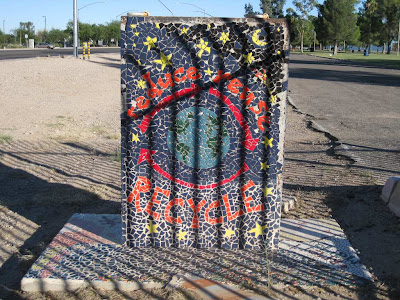 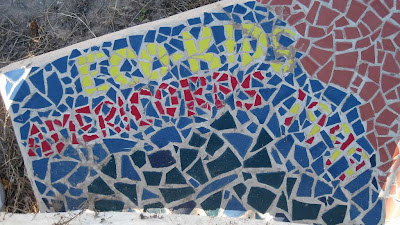 A couple of months ago, Samantha Munsey interviewed me and Fiona Foster shot video as we explored some of the murals near the corner of Fourth Avenue and Sixth Street. Their video is on vimeo.com, here:


Anonymously Artistic: The Tucson Mural Project
They also built a website with more about arts, music, film, food, ...
Keep Tucson Sunny!
Posted by Jerry Peek at 12:01 AM No comments: