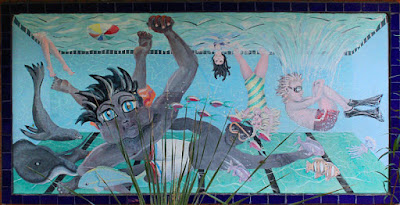 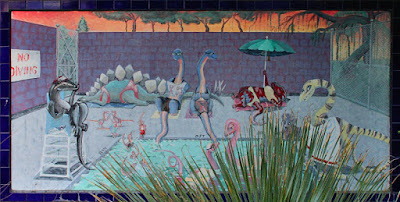 The camera data in these photos says that they were taken around 6:45 AM on June 30th. If that's right, it seems that David Aber is an early riser.

Here's a third entry about new art along the northeast side of Toole Avenue. The previous entry showed a five-panel row of Tucson scenes. A little farther northwest is another one:

Close-ups, from left to right: 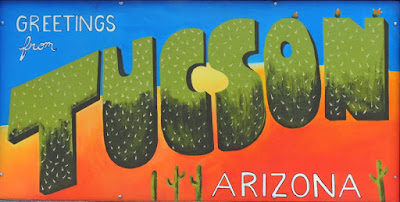 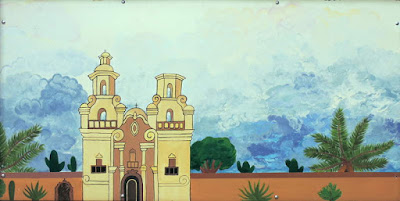 I took the photos on September 15th.

Friday I saw a new mural and sign along Toole Avenue just northwest of the corner of 6th Avenue and Alameda.

Both panels have been repainted with Tucson scenes. These look more permanent to me than the earlier works (though, on Toole, you never know...). Here's the panel closest to 191 E. Toole:

Next to the Warehouse Arts District sign is one of two sets of mural panels. The panels have been repainted over and over; here are links to photos of both sets of panels over the past few years. (You can use your browser's “back” button to come back here after seeing each one.) 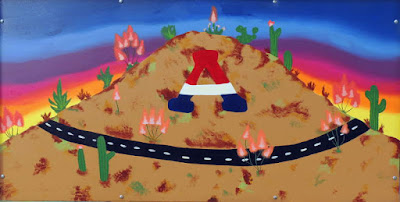 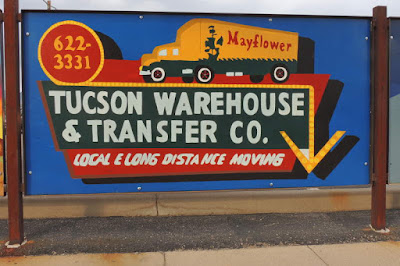 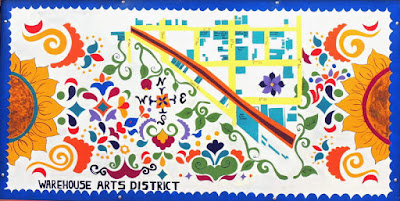 Next time, a look at the other panel.

If there's one thing you can count on about the street art along Toole Avenue downtown, it's that the art is always changing. Another thing you could count on — until a month or two ago, anyway — is that the art was usually eclectic.

Let's start with the north side of the building at 191. For years, it had a mural of Tucson scenes: Train, trolley, and a three-eyed alien. This spring, most of the mural was whitewashed — except the edges of the right side (which you can see at the second photo in the post linked above). Three days ago, I photographed a new mural, wrapped by a bit of the old one, at the right side of the wall: 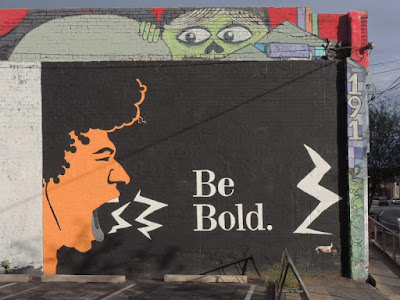 Not far from the mural is a new sign, dedicated on July 31st. It's by artist/supervisor Amy Novelli with metal fabrication and construction design by Jason LaFleur. There were also ten youth artists.

To the left of the sign are ten painted panels with new scenes. I'll show them next week.

In 2012, I made a couple of visits to the corner of 10th Avenue and 32nd Street. You can see those photos in the entry Jorge's Tire Shop. Mark Fleming stopped by on June 8th of this year and sent these closeups of the north wall: 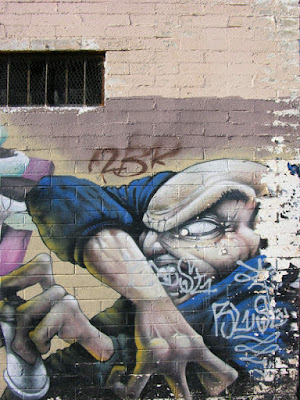 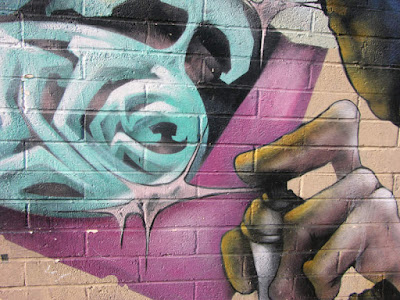 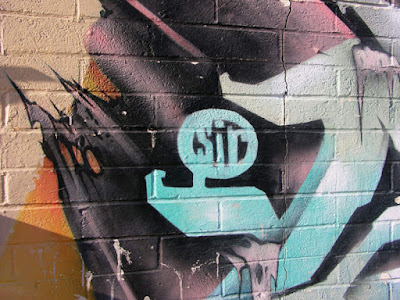 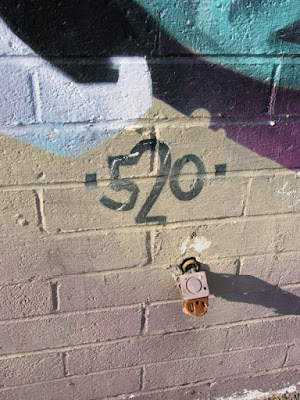 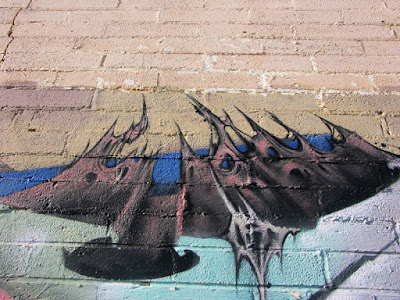 Much appreciated as always, Mark!

Not long after this blog started, we posted photos of murals along South 10th Avenue just as it entered South Tucson from the north. In June, Mark Fleming revisited one of the murals — the fantastic one around the power substation at 10th Avenue & 27th Street. Some of the mural has been trashed by taggers, but overall it looks pretty much the same — more than seven years later. 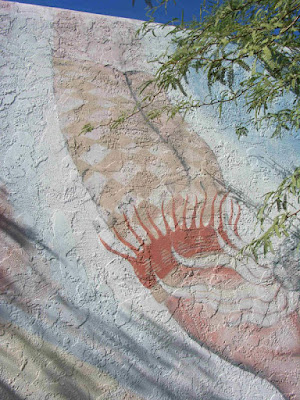 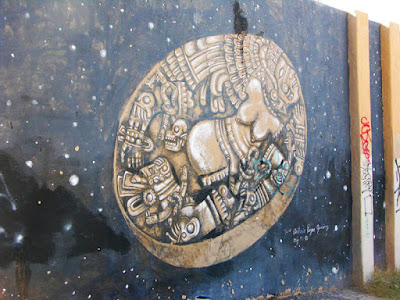 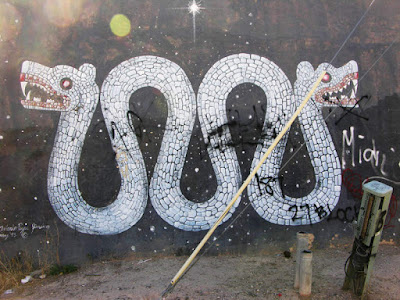 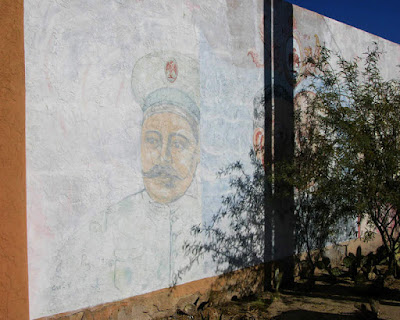 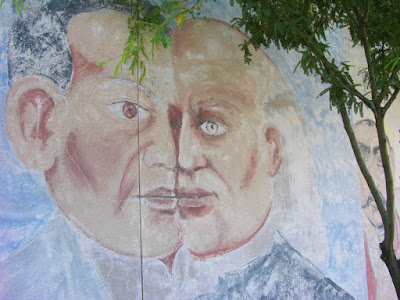 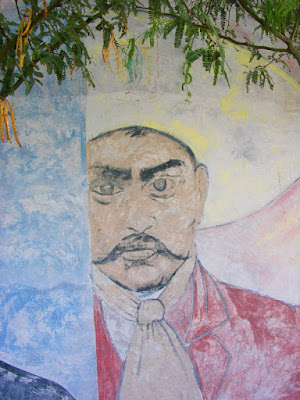 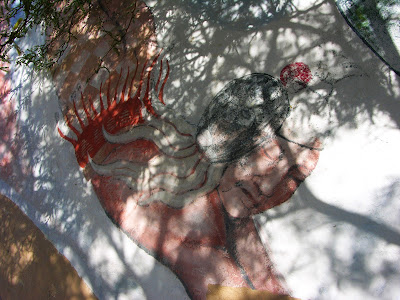 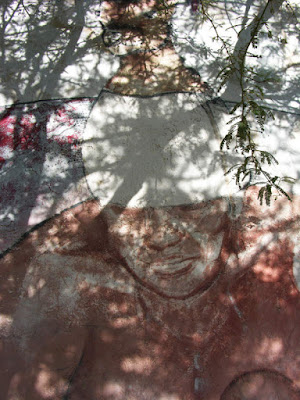 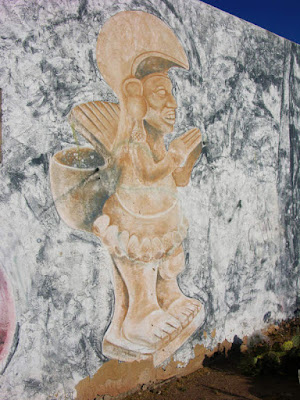 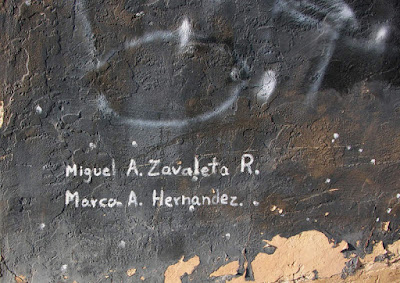 A Wednesday article in the Guardian, the British newspaper, showed photos of amazingly-designed bus stops in countries of the former Soviet Union. From time to time, I like to show murals outside of Tucson... if this sounds intriguing, check them out:


Next stop, Siberia! The strange and beautiful world of Soviet bus stops – in pictures 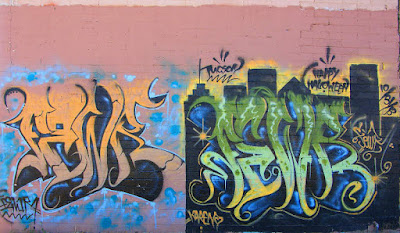 Mark Fleming (thanks!) took that photo in June.