Tawt you taw a puddy tat?

This year, 2022, is Tweety Bird's 80th birthday (#Tweety80). A mural on the south wall of English Salon & Spa takes you back to those Looney (Tunes) days: 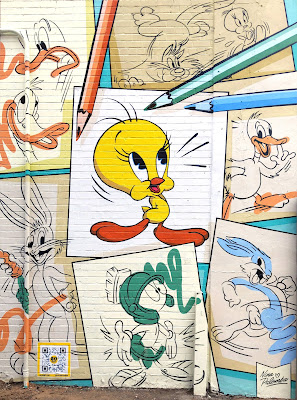 Haven't heard of Tweety Bird or just want to see a fun video? Here it is on YouTube:

(A link to the video in a separate window or tab: https://www.youtube.com/watch?v=1ifwADpFSyA) 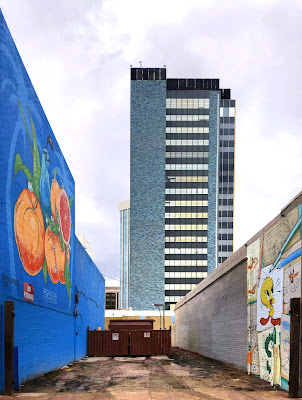 BG Boyd Photography sent this spectacular version of the photo above: 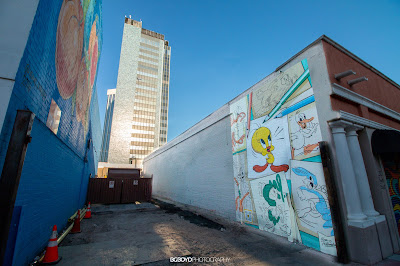 Nina Palomba painted the mural. Here's her signature at the lower right corner: 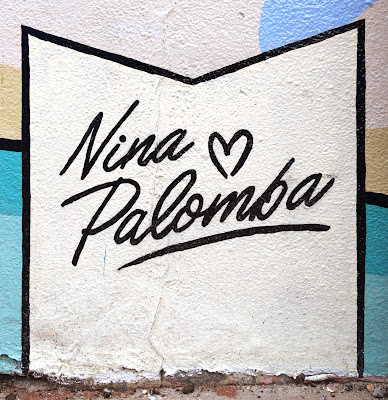 I didn't recognize her style in other Tucson murals. It turns out that she's painting Tweety murals around the US. I found that from the QR code, which is at the lower left of the mural: 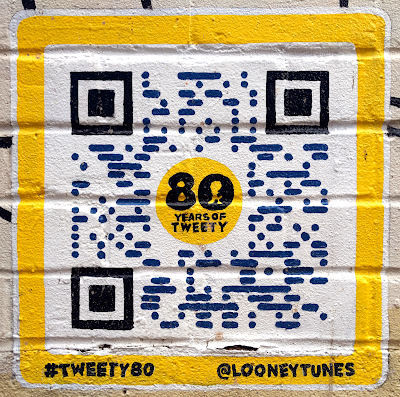 (Geek note: Look closely — you can click on the image for a larger view. Some of the dots and lines aren't perfect. Did she paint the QR code by hand?!)

That code leads to the web address https://www.looneytunes.com/tweety80/ — where you'll find the bios of Nina and other artists, and photos of other Tweety muwals.

That's all Folks!
Posted by Jerry Peek at 6:01 AM No comments:

Longtime KOLD 13 TV news anchor Randy Garsee founded this blog in 2006. He loved Tucson's murals and wanted to spread the word. (He passed away in 2013. Some of his story is in our post Farewell, Randy.) I just discovered a video on Randy's YouTube channel showing several Tucson murals. He posted it on August 24, 2008.

The video is low-resolution (TV in 2008!) so opening it in another page may not help you much… but here's a link: https://youtu.be/pKxczQbXomY.

Gone but not forgotten, Randy.
Posted by Jerry Peek at 6:01 AM No comments:

You're being watched on Congress Street...

Ignacio Garcia's new mural covers the entire front of Tierra Antigua Realty's downtown location. It's bright and big, so (as you can see!) it really stands out from across Congress Street. But it's also surprising when you're walking from the west side toward the east: 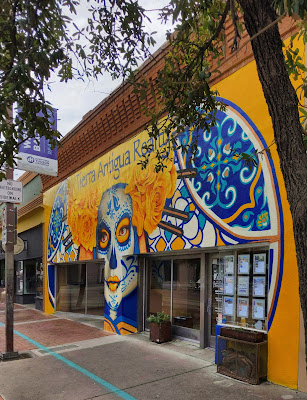 BG Boyd Photography, who specializes in drone photography, sent this aerial photo (thanks!): 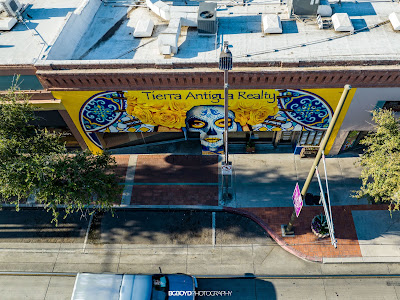 Drivers passing by should be nervous. :)
Posted by Jerry Peek at 6:01 AM No comments:

During July, I visited Denver. One place I stayed was in a gentrifying formerly-industrial neighborhood along Broadway where the cross-streets are avenues named for states. (To see a map, click on “Location:” at the bottom of this post.) When I went out for a walk, I spotted 20 murals in the four blocks between Iowa and Arizona Avenues.

This blog has over 1,000 Tucson murals over the past 15 years. The number of murals in just these four Denver blocks is close to 2% of 15 years' worth of murals all over Tucson! That's a lot of murals in a small area — something like Fourth Avenue in Tucson. (Denver also has at least one neighborhood packed with even more murals called RiNo — which, by the way, has nothing to do with Donald Trump and Republicans.) This got me thinking that Tucson neighborhoods wanting more visitors could pack lots of murals in a few blocks.

All of these murals gave the area a (literally) artsy feel when I walked through it. Here are unedited quick snapshots of the murals I saw: 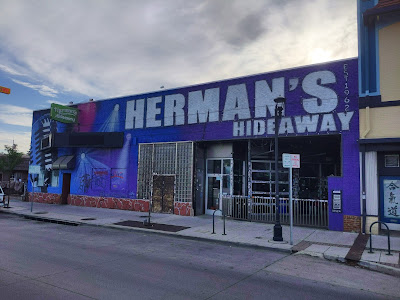 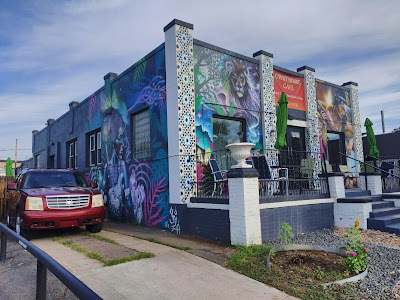 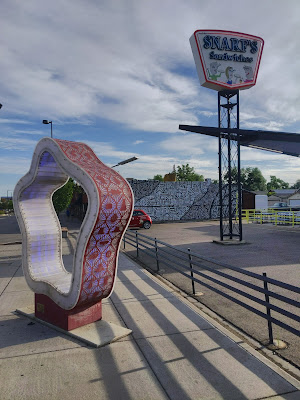 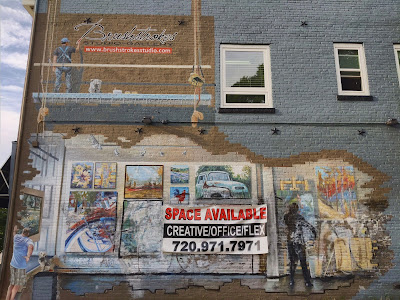 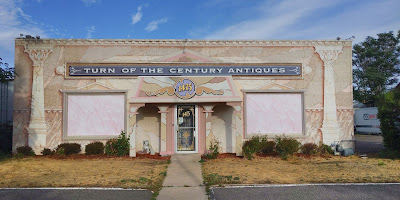 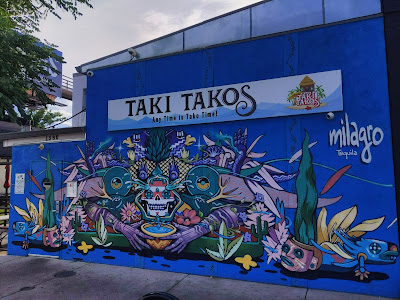 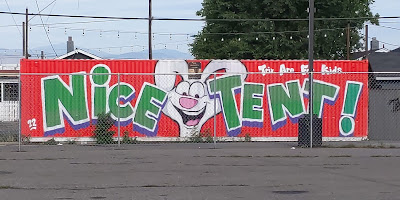 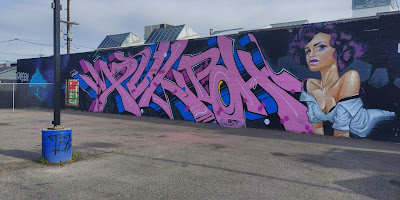 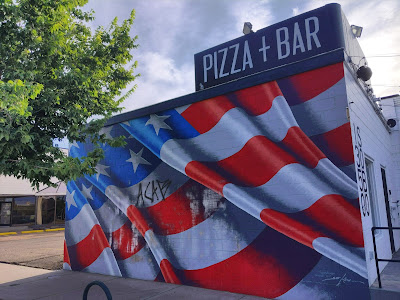 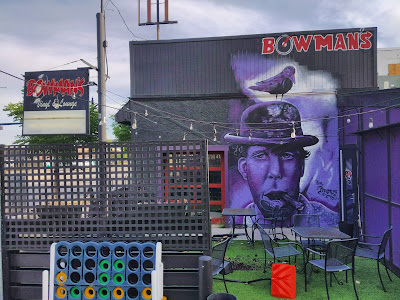 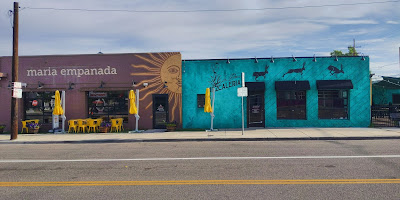 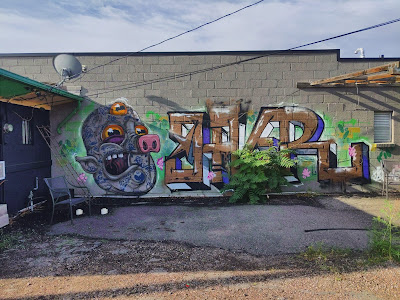 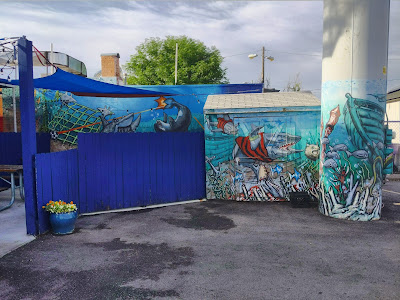 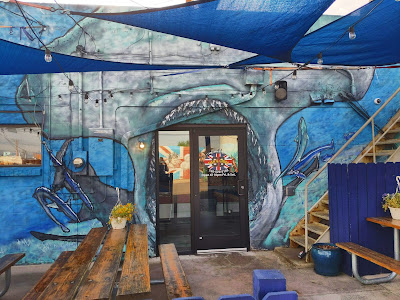 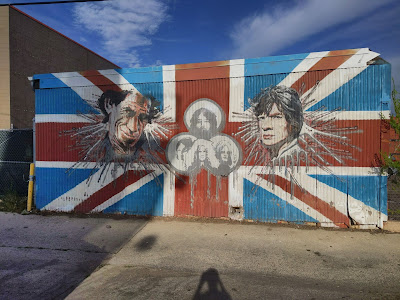 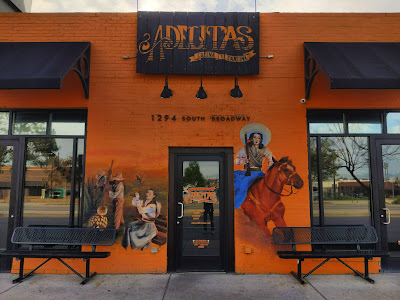 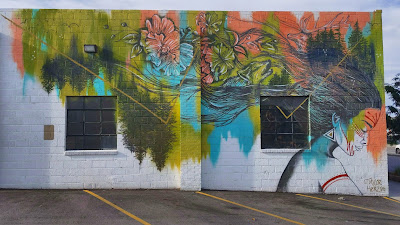 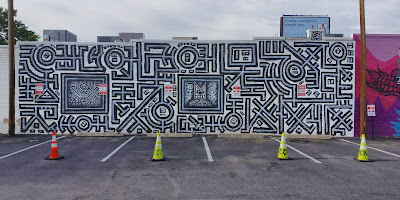 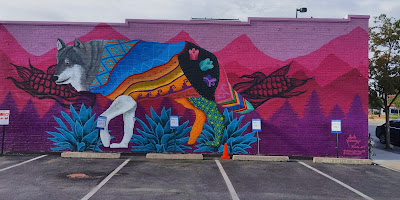 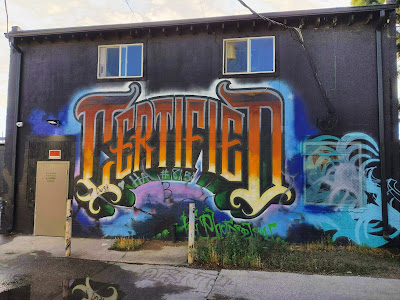 This is both an advertisement and a mural.  I love the two kids fighting to get their wish.

"The Santa Cruz Valley National Heritage Area is proud to commission another heritage mural that focuses on empowering indigenous youth to take the expressive traditions passed down from their communities and their own artistic style to paint their understanding of traditional stories, cultural figures and epic histories in a collaborative mural."

The mural is on the west wall of the Sonoran Stitch Factory located on W. Rillito St.  The mural is seen from N. 15th Ave.  A previous mural appeared on this wall on 10/19/2015 as Near Richey Elementary.

To further explain; the Yoeme are originally from Sonora Mexico around the Yaqui River.  They are more commonly known in the U.S. as the Pascua Yaqui. The Yoeme are the only Native American tribe that has never officially surrendered to either the Spanish colonial forces, the Mexican government, or the United States.

Several updates from Jerry Peek: I made a note about a post and video I saw on Facebook July 1st showing the mural in progress and finished. (The unveiling was June 26th.)

The original video is by BG Boyd Photography. You don't need Facebook to see it: https://www.youtube.com/watch?v=gUdP5uApIAc

There's more information about the mural and the two professional muralists on this page, Santa Cruz Valley National Heritage Murals: https://santacruzheritage.org/yoeme-unidos/
Posted by David Aber at 6:01 AM No comments:

Found at a private residence on South Meyer Ave.  The mural is easily seen from Meyer Ave.

Found on the north wall of the Folk Shop.  The shop carries new, used and vintage folk and ethnic musical instruments.

Click for a larger image.
Posted by David Aber at 6:01 AM No comments:

Found on a residential wall in the Palo Verde Park Neighborhood.

Mural disappears, comes back even better

The block west of Stone Avenue between Congress and Broadway used to have a square structure with murals on three sides. We posted photos in 2012 and 2014. (I've reposted one of those photos farther below.) As part of downtown rebuilding, the murals were taken down. But one has come back, in magnificent style. I knew it was coming, but I didn't know it was done until BG Boyd Photography sent two great photos. The first is an ultra-wide panorama (so edges appear curved): 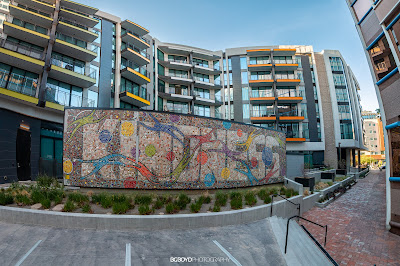 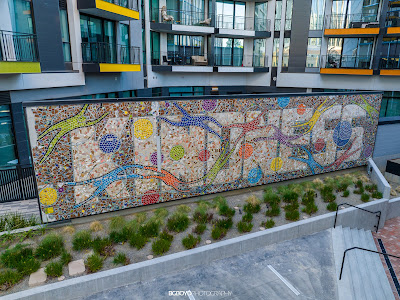 On May 17, 2012, I posted a photo of the mural under construction in Murals being made, part 8 (Kindness, part 3) along with more info; you can click there to see it all. Here's that photo, complete with buckets of materials and a NO ACCESS sign: