ULTM Clothing, which occupies half of the building at 3919 S. 12th, has a mural that I'm showing in three pieces here, from left (north) to right (south): 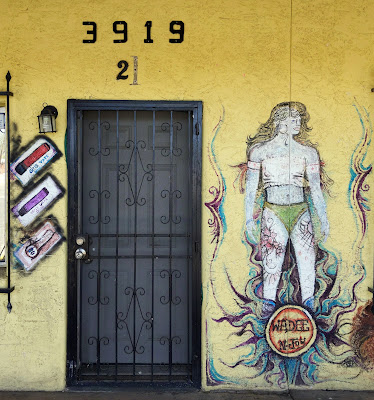 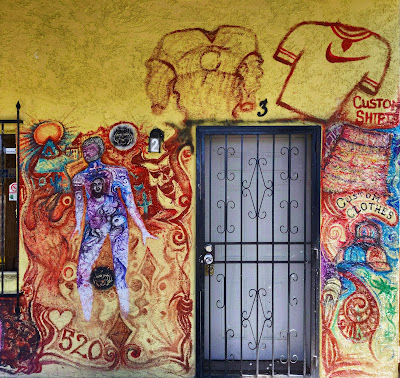 I was there on April 3rd, a mural-hunting trip along South 12th.
Posted by Jerry Peek at 6:01 AM No comments:

If you think it's hot in Tucson...

…the capital of our neighbor to the south — Hermosillo, Sonora — may be hotter. The thermometer that's blowing its top is part of a mural along Calle Pino Suárez.

The thermometer is at the left edge of the city map mural below.

And that mural is at the right (closest) end of a mural gallery, partly hidden behind a tree: 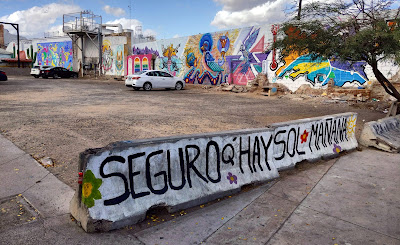 The sign on the barrier in front of the parking lot translates as “Sure, there will be sun tomorrow.”

A long strip mall along South 12th Avenue has two stores at the same address: Mercadito La Unica, which sells meat, bread, and tortillas; and Alejandro's Tortilla Factory, which makes… you guessed it. I stopped by on April 3rd because I'd taken a bus to Mexico from the same shopping center during March, and I'd noticed the murals and signs interspersed across the top of the businesses: 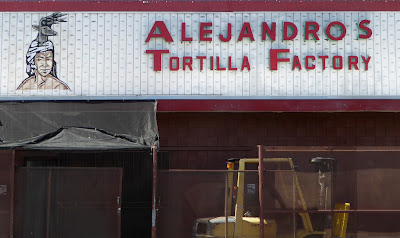 The man's head with a deer's head on top looked familiar. Oh, I remember: I rode a bus from the Tucson location of the Mexican bus company Tufesa, farther along the same shopping center. Tufesa's logo is a deer dancer: 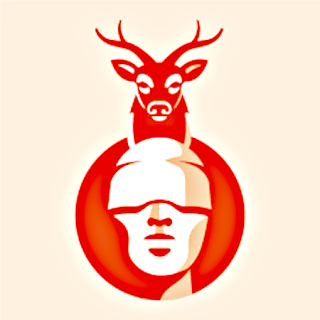 I asked a friend about that. He said it's a deer dancer (in the Yaqui language, maso). I searched online and found that the deer dance is part of the culture in Sonora and Arizona. In case you're interested, here's some of what I found:

I found this sculpture in a shopping area of Hermosillo, Sonora in March 2022.

About the rattles, the Britannica page above says: “In addition to container rattles, Native Americans make rattles from small objects strung together in clusters; these objects include deer hooves, seashells, seeds, seed pods, nuts, fruit pits, …”

(Note: The Arizona Daily Star lets non-subscribers read only a couple of its free articles before you need to log in.)

Rock “Cyfi” Martinez travels the world painting murals. He started out in Tucson, years ago, writing illegal graffiti. I just found this 2018 article from the Arizona Daily Star: How Tucson artist Rock Martinez evolved from tagger to muralist

It reminded me of another article I saw years ago. I found it, too, from 2008: Local graffiti artist Cyfi has turned his hobby into a career

In between, Cyfi organized the WintaFresh urban art weekend. It drew artists from all over the US. You can see some of the art over the years in the 1240 North Stone section of this blog's page Layers of murals: histories of a few walls.
Posted by Jerry Peek at 6:01 AM No comments:

Walk across the street for...

They're across Alvernon from the Randolph Park Recreation Center, at the northeast corner with Calle de Jardin. The big mural is on a wall that runs along a gravel driveway, and the small mural is on the side of the home at the end: 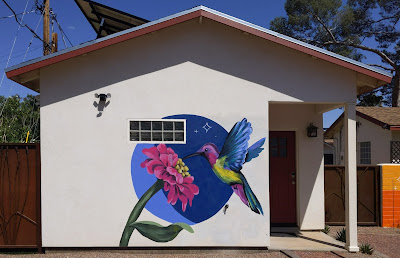 The long mural looks like this from the front of the home: 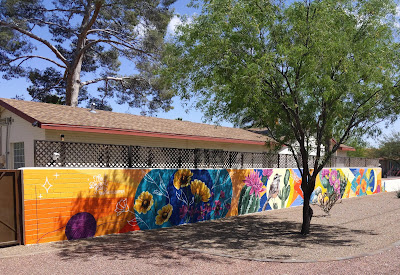 Let's walk along the mural from near (the north) to far (south): 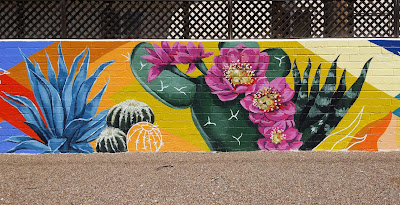 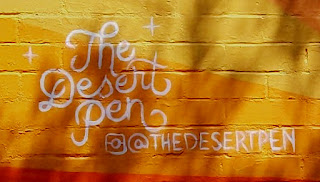 I took those photos on April 22nd. David Aber spotted the mural and took this photo at sundown on February 28th, while it was being painted:

Tucson's Rock “Cyfi” Martinez now travels the world painting murals and makes his home in the Twin Cities of Minneapolis / St. Paul. He's come back to Tucson a few times recently. The best-known mural he's painted recently has to be the one inside the newly-renamed Linda Ronstadt Music Hall — formerly the Tucson Music Hall. Cyfi painted with Joel Valdez (his Instagram is @joel2valdez; you can probably see it without an account if you don't click on any photos). Here are photos from May 7th on Instagram @cyfione (to see more, click the arrow in the circle at the right edge):

If you're a Star subscriber, you can read this story of Cyfi and the mural and see even more photos: Tucson muralist found inspiration from Linda Ronstadt's story

I'm hoping to get a chance to take a photo myself. If I do, I'll update this.
Posted by Jerry Peek at 6:01 AM No comments:

Mural by Alejandra Trujillo.  Found at 'The Historic Y', 300 E. University Blvd.  The mural is on the east wall facing N. Herbert Ave. 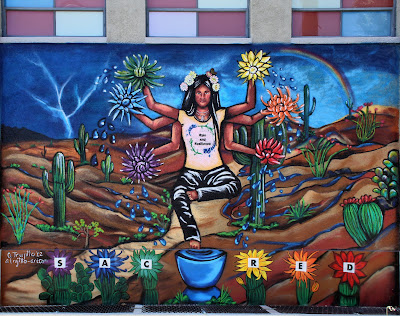 Ruthette Kennedy sent another photo of the mural as well as this closeup of the artist's signature and website: 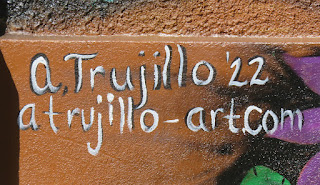 Thank you, Ruthette!
Posted by David Aber at 6:01 AM No comments: 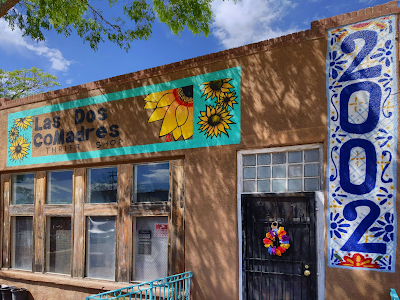 Wagon Burner Arts painted the sign and address. WBA's logo is at the bottom of the sign: 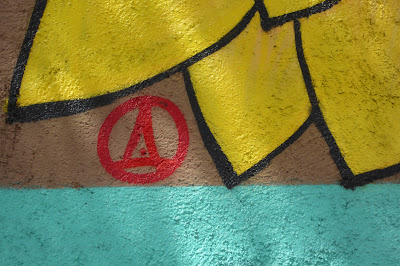 Panaderia at a tortilleria

On September 20, 2019, we showed a mural by Jilmar Alaniz on Tortilleria Don Juan (where you can buy tortillas). The same building also has Panaderia La Providencia (where you can buy bread). There's also a small restaurant inside. When I stopped by on April 3rd, 2021, I found that the panaderia had its own mural, next to the front door, just to the left (south) of the Tortilleria Don Juan mural. It was partly covered over: 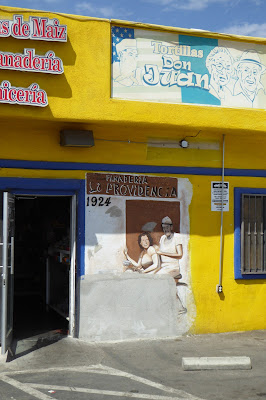 A closer look shows that they're riding a bicycle together: 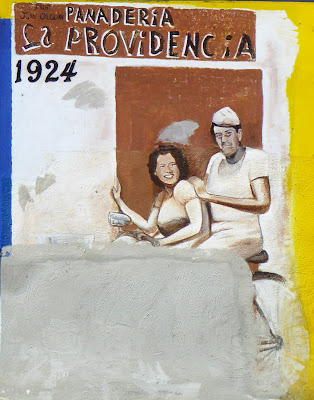 (I joined the shadow and bright areas with my favorite free photo editor, GIMP.)

I'll keep an eye out for the mural to be repaired or replaced.
Posted by Jerry Peek at 6:01 AM No comments:

Skyline of the Imagination.

On April 21, 2022 I happened to be on Jerrie Ave. (for no particular reason) and found this mural: