Pacman next to the border 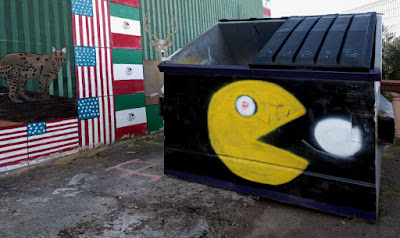 On January 29, 2014, we published two photos along the US-Mexico border wall in Two sides on Toole. I stopped by (as I do often: The art on this building is always changing!) on November 13, 2016, to find that the dumpster wasn't painted with a UFO anymore; it had Pacman.

This isn't a word on Scrabble :)

I just checked a site with allowable words for Scrabble™ and found that XUT isn't. (Darn. After I found this door — on the always-changing art Mecca of 191-197 Toole — I'd added XUT to my secret list of Killer Scrabble Words. :)

(If you know more about XUT, please leave a comment below. You can be anonymous.)

I honestly try to avoid Phoenix when I can ;-) but I'll be there for an afternoon and a morning next month. I follow Lynn on Twitter… and there defintely is a lot of art in the Phoenix area. (Maybe I'll even decide to go back? :)

This lonngggg mural stretches, panel by panel, along the section of Linden Street east of 4th Avenue. It's an ongoing project. David Aber stopped by on on April 17, 2017. He snapped the newest panels on that date at the western end of the mural in a left to right, east to west direction:

Untitled by Sneha Srinivasan. Her description of her work includes the words “Kindness, Hope and Love” which David has used as the title on his Flickr post. ("Yes," he said, "I spelled her name correctly."):

An untitled work in progress by Teresa Altamirano (finished by now, I'd guess):

For more photos from this blog, take a look at:

Even more art at El Rio on Speedway!

If you haven't seen our blog entries from May 02, 2008 and January 23, 2012, they'll give you a good introduction to the great murals at this Community Center. But, in a visit on November 12, 2016, I found more murals. This is another in my series of almost-lost mural photos…

I'll (uncharacteristically :) let the murals speak for themselves: 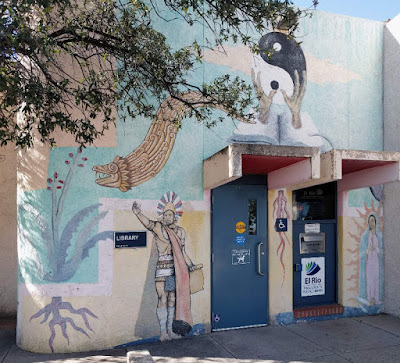 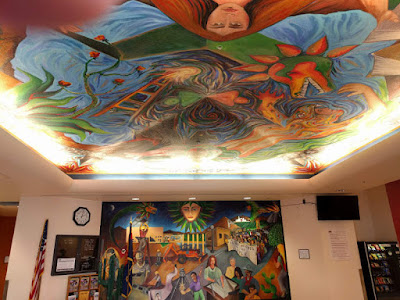 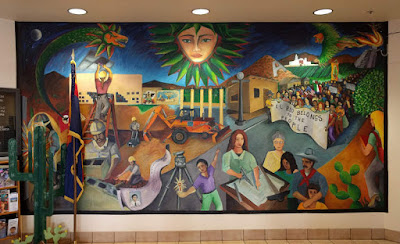 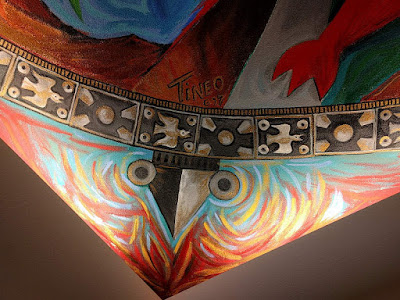 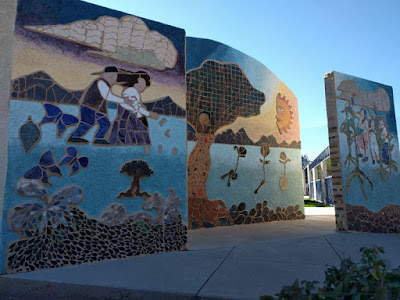 (Not) Mural Lovers, part 4: One of Tucson's largest ruined

I remember the days when taggers didn't trash murals. It's so sad that these animals seem to be spraying their hatred (or fear?) onto the art that almost all of us (not including the taggers) love.

Tucson News Now reported on Friday: Artist to repair twice-tagged mural. This is Joe Pagac's huge mural on Stone just north of 6th. You can see the first tagging in our July 2, 2017 entry !*?%&#= TAGGERS!!.

Joe originally covered the mural with a clear protective coat, but it'll apparently still take him 8-12 hours to repair the tags.

Next in our series of almost-lost murals…

It was November 11, 2016. I'd read about the neighborhood-sponsored beautification of the Himmel Park library, so I stopped by with my camera.

One of the changes was the new bicycle rack outside the front door, which is topped by signs lettered with bicycle chains — such as “STUD.” (At least I thought that's what it said. Actually, I just now zoomed in on the photo. I can see that there's a “Y” at the end, made with a much darker piece of chain. What a shame. :)

Out front are mosaic-topped benches:

Here are close-ups of the bench tops: