Along the north side of Drexel Road, west of Campbell, is a long wall covered by a long mural. You can see it from above in this satellite view from Google Maps. Back on October 9, 2011, I rode along, from west to east, and snapped the mural in sections: 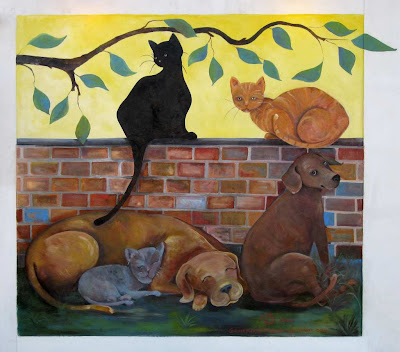 Here's a close-up of the muralist's signature:

Rock Martinez in the Tucson Citizen, 2008

The print edition of the Tucson Citizen is no more... though the news“paper” lives on at TucsonCitizen.com. Thousands of articles from 2006 to 2009 are online in the Tucson Citizen Morgue, Part 1 — a great resource. Metro columnist Anne T. Denogean wrote many columns that I enjoyed.

One that I missed — until earlier this month, when I was searching for mural news — is a story about muralist Rock Martinez. She wrote the column From tagging to legitimate artwork on May 2, 2008. In case you missed the story, too, you can click there to read it.

Update (June 19, 2016): As I read this eight-year-old article, I realized that some of the murals are on this blog. Here are the ones I recognize:

Around the corner -- five years later

My first mural photo was published on the Tucson Murals Project May 25, 2007. The rest is history :).

What’s the saying — we should learn from history? I've seen hundreds of murals since then, and I've learned to check the other sides of a wall with murals to see if there might be more. I was reminded of that earlier this year as I rode past the first mural, from five years ago, on January 27th. When I looked around the corner... 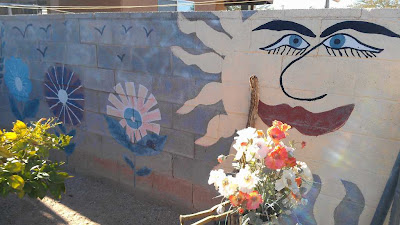 This mural was on the side of the wall facing the front yard at 2308 E. Warwick Vista. I asked a woman there if she knew the story of the mural; she didn't. Maybe she was a visitor? I decided to chalk it up to experience and hope we'd find out later whether this mural was related to the one around the corner.
Posted by Jerry Peek at 12:01 AM No comments:

Three murals from the late '90s?

Last week, as I was searching online for Tucson mural photos, I found a few on the website of photographer Dan Heller. I knew Dan back in the 1990s, but it's been years since I've seen him. I wrote to ask if he knew where the murals were.

He doesn't have their exact locations. Maybe you remember these murals? Each of the links below will open a page from his website in a new window or tab on your browser. (When you close the new page, this blog page will still be here.) If you recognize a mural, would you please add a comment at the end of this blog entry — or send me an email message? Thanks.
(While you're on Dan's site, take a look around. He has a lot of great photos.)
Posted by Jerry Peek at 12:01 AM No comments:

Murals along I-19 near Valencia

Just north of the Valencia exit from I-19 is a neighborhood full of murals along Calle Pinta (which follows just to the east of I-19) and the streets that join it. To get there, take Valencia east from the I-19 junction. Take the first left (head north) onto S. Santa Clara Avenue. Then the fourth left will be S. Santa Maria Street. Drive west until the road reaches Calle Pinta and makes a right turn to parallel the freeway. Here's the first mural you'll see:

Look to the left at the sound wall next to I-19 for two pairs of mosaic murals:

The rest of the murals are to the east side of Calle Pinta. Some are on the side streets that join Calle Pinta:

Still quiet at the Rialto

Two months ago, I noticed that the murals on the east side of the Rialto Theatre weren't changing as often as they used to. I posted a photo on April 14th.

I went back three days ago — May 17th — and saw that the murals had all changed... and they'd all been there for about a month since the date of the last event. I'll hope Joe Pagac has plenty of other work to do! Here's the scene: 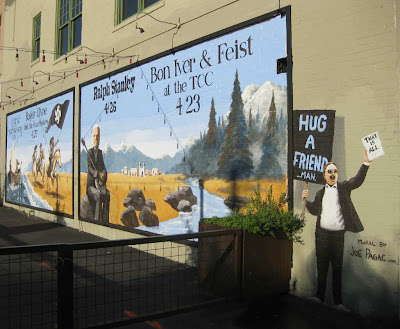 Here are the southeast corner, the east wall from the north end, and the north wall: 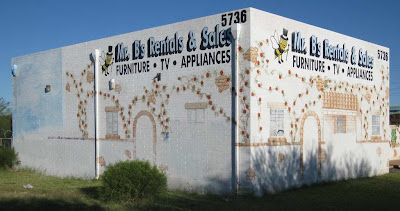 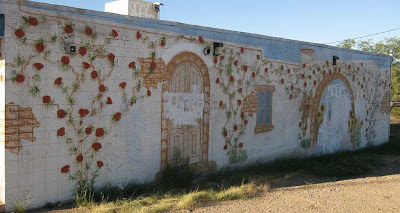 Murals being made, part 8 (Kindness, part 3)

From time to time I find a mural that's being worked on. (The last time was the day before July 9, 2011.) Yesterday I stopped by to check out the newest mural in the Kindness series that Ben's Bells is spreading around town. (Two others I've found were near Tyndall by the U of A and along Toole near 6th).

This new mural is in the plaza just southwest of the corner of Congress & Stone.

Update (September 2, 2022): A few years ago, as part of downtown's redevelopment, the mural was taken down and stored. Now it's been reinstalled in a magnificent way. There are photos in Mural disappears, comes back even better.
Posted by Jerry Peek at 8:27 AM No comments:

Randy has started a Facebook page with a fresh view of the murals from this blog:


www.facebook.com/TucsonMurals
If we have just one photo of a mural, he'll show it. When we post more than one photo, he'll link to the blog so you can see them all here. Either way, you can get his take on the murals I post here on the blog. Please have a look (and a “like,” if you'd like). 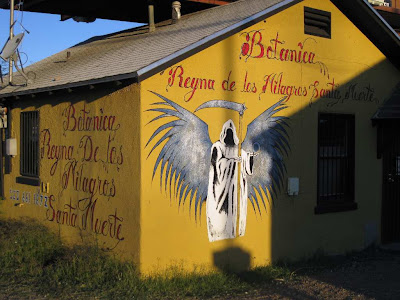 Our December 13, 2009 post First mural in "kindness corridor" showed the start of mural outreach by the Ben's Bells project — to remind visitors to the University district, downtown, and other parts of town to be kind. We'll post more kindness-inspiring murals as we find them (and, I'm glad to say, there'll probably be lots!).

On Friday the 11th, I read the Arizona Daily Star article Downtown's kindness mural, with the story of a new mural on a plywood structure at Stone & Congress. I'm hoping to have more photos of the mural as it's filled in.

A month before that, on April 7, I spotted a new mural along the east side of Toole Avenue between 7th and 6th:

Update (October 4, 2012): A similar four-panel mural has been painted just south of this one.
Posted by Jerry Peek at 12:01 AM No comments:

Randy started this blog almost six years ago: July 12, 2006. Today's post is our 600th, and we've got a ways to go! (The unpublished murals pages show some of the murals that aren't on the blog yet.) Today we've got 21 more murals for you: 20 murals and a plaque (that you might count as a "mural"). 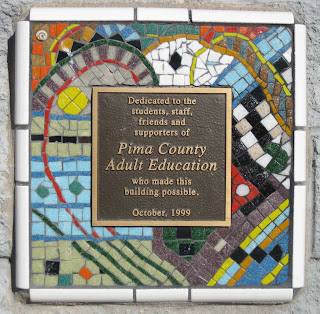 The Adult Learning Center at El Pueblo Neighborhood Center, 101 W. Irvington, is filled with murals. Back on May 4, 2010, we posted four murals on the north side of the center. When I rode by from the south on October 9th, 2011, I found 21 more (and I might have missed a couple!). I discovered them when I spotted one of the mosaic-topped arches at an entrance to the courtyard that runs between the buildings. What a mural-lovers’ Mecca!

Above is the plaque on the wall by the south entrance. Below, the southern entrance portal: the south side, then the north: 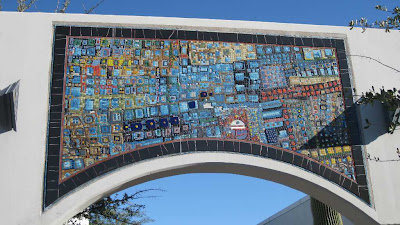 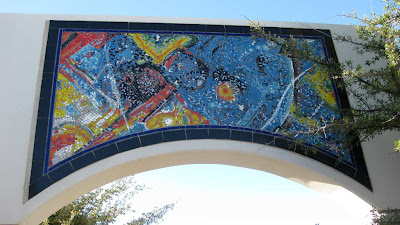 Next, let's take a walk past the first ten classrooms, from south to north. By each door is a mural with a desert plant and the name that English-speakers typically use for it. There's also a square plaque with the room number and the name of that same desert plant in Spanish. (At least, that's my guess from looking at the pattern...) I'll list the room number and Spanish name (from the plaque) next to each mural:

The signs for the next four classrooms, 11 through 14, touch the mural and are wrapped in the same border. So I'll show them without labels: 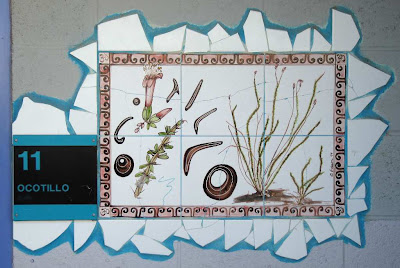 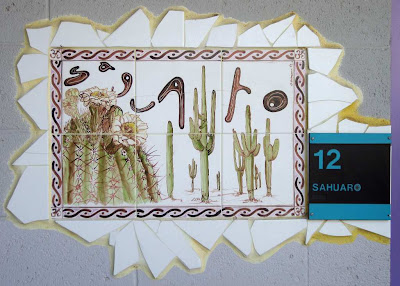 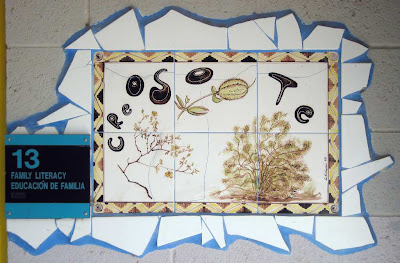 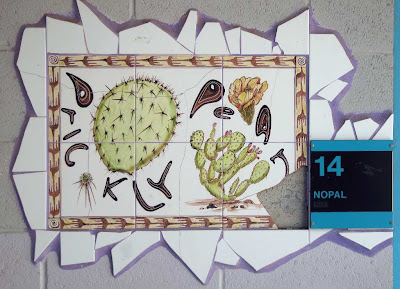 I was here on October 9, while the building was closed. But the classroom doors have small glass windows, and I saw that rooms 5 and 6 have spectacular stained glass on the opposite walls. I shot these two photos through the little windows. (As always, you can click on a photo for a larger view.)

At the other end of the courtyard (which is on the west side of the buildings) is another arch with mosaic murals on top. Here are the east and west sides of the arch: 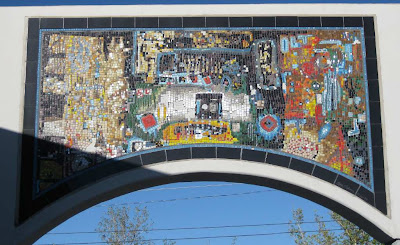 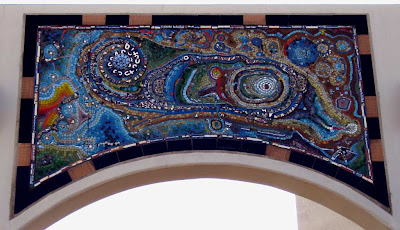 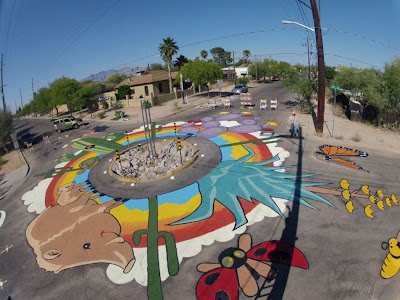 Melodi King sent this photo of a street corner in the art-filled Dunbar/Spring Neighborhood. It's a new mural painted on a street junction by Rock Martinez and Joe Pagac.

I haven't had a chance to check out the area recently, so if you know the address, please send me email or leave a comment below. Thanks, and enjoy!

Update (May 15, 2012): I realized that I could check the Dunbar/Spring Neighborhood website. Sure enough, the first listing, Neighborhood Mural Complete!, said that the mural is at the corner of 11th & University. It mentions that neighborhood residents helped paint. And it has three photos.

Update (October 10, 2014): The mural has faded quite a bit in three years. You can see it being painted in Rock Martinez' photos.
Posted by Jerry Peek at 2:52 PM No comments: