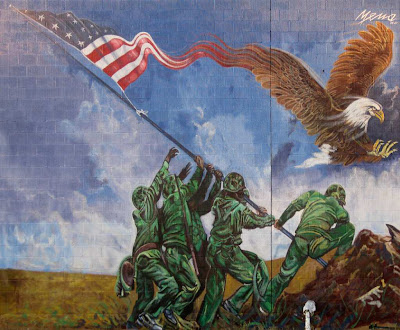 This tribute from Tucson muralist Luis Mena is on the north wall of Miller's Surplus, 1537 S. Craycroft — a few blocks south of 22nd. (There's a bit of early-morning sunlight at the top of the mural.)
Posted by Jerry Peek at 12:06 AM No comments:

The well-known mural at the La Pilita Museum, 420 S. Main, has been missing since its south wall was rebuilt. (You can see the original mural in our May 28, 2009 post.) 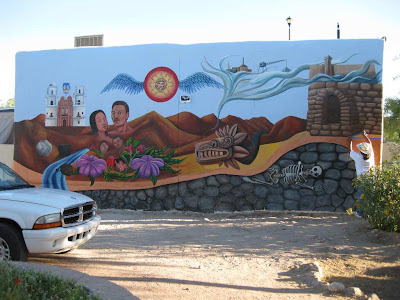 Here are a couple of close-ups this morning, an hour ago: a detail from the design taped to the wall, and muralist Martin Moreno getting the mural ready for another day of work:

He'll give a talk about the mural this evening, Saturday, May 28, at Raices Taller 222 Art Gallery, from 6:00 to 7:00 p.m. Martin told me this morning that you're welcome to email him at cuervostudio@hotmail.com.

First: I'll be giving a talk about Tucson murals at the Arizona Senior Academy on Wednesday, June 15th, at 3:30 PM. I'll list some of my favorite parts of town for mural-hunting and show lots of examples. Everyone (not just seniors...) is welcome.

Second, here are a couple of stories from the New York Times that I thought you might be interested in:

A mural in a Brooklyn school has been growing for years. Now it occupies two floors of the school; if it were stretched outside, it'd take two city blocks. And the most inspiring story is what it's done for the students who paint it:

Some of us love graffiti and some of us loathe it. (It also usually depends on where the graffiti is and what it is...) Then there's "yarn bombing", which is usually cute and often falls apart after a while:

Howard Rains sent in more new photos that we don't have yet here on the blog. One is this mural of the Old Pueblo Trolley and 4th Avenue: 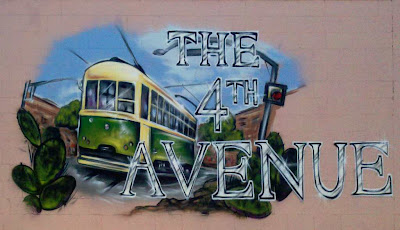 It's along a parking lot for Plush on 4th Avenue. The mural is half a block south of 6th Street, between Herbert and 5th Avenue, on the south side of a wall, across from the building with the wild wraparound murals. If it has an actual address, it'd be around 450 N. Herbert.

Update (January 25, 2013): This mural is gone. The artist who was painting over it told me that Rock Martinez did the original. “The trolley is gone, and the modern street car is coming,” I said. “Right; gotta keep things fresh,” was (close to) his reply. Here's a photo showing the mural being replaced: 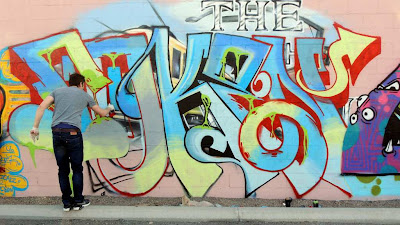 Posted by Jerry Peek at 7:16 AM No comments:

Out east on 22nd Avenue — at Stocker Drive — is this mural on Gatoreyez Auto Shop: 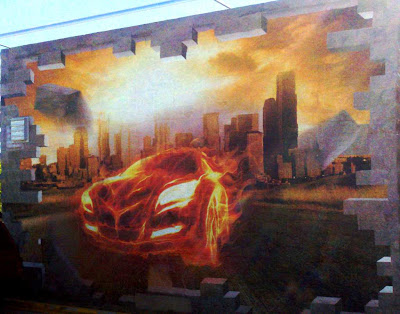 It's right around the corner from everyones' favorite spot in this part of town: the emissions testing facility. (Remember those signs telling you how to keep your engine cool before the test? :)

Howard Rains sent the photo; he mentioned that he'd like to re-shoot it some afternoon. In the meantime, I've removed most of the gray cast and zapped up the contrast and color (with my favorite, free, GIMP photo editor.) Thanks for pitching in, Howard!

Two school buildings are decorated with murals. First, on the side of 711 Lester St. (at 1st Avenue) — a former convenience store that's now part of the school:

Just south of there is the entrance to the preschool, on the south side of 1730 N. 1st Avenue: 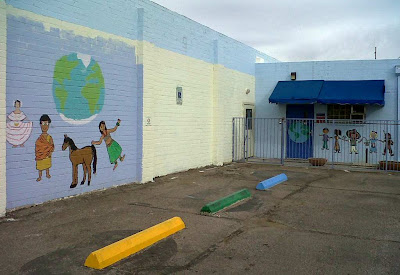 I took the photos in October and November of last year.

Like almost anything, murals can look different under streetlights than they do during the day. A year ago, I tried some late-night photos of murals with creatures, ctitters, and so on, in Murals by moonlight. But none of those photos turned out as "different" as I thought they might.

Today, a new contributor to the Tucson Murals Project sent a mural photo that really is different at night. It's part of the mural-covered front of Dale's Doors, 321 S. Kino Parkway: 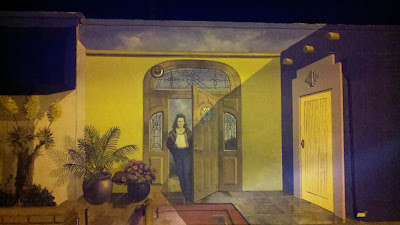 (Compare that to the daytime view.)

There's a story behind this story. Back in March, Howard posted a comment on Right at home on Wilmot. From there, I found his blog, Sky Island Riders. Howard enjoys riding around Tucson, snapping photos. He sent in four today. Three of them are daytime views, improvements on the ones we'd already posted.

As you've probably seen, I've got a backlog of photos and I usually only post twice a week. But I didn't want to let this great nighttime shot get lost in the stack, so here it is.

Thanks, Howard!
Posted by Jerry Peek at 7:31 PM No comments:

There's a spot of sunrise light at the top of this roll-up door, 222B N. Arizona Avenue (just south of 6th Street)... which fits a place called Art Awakenings, doesn't it? 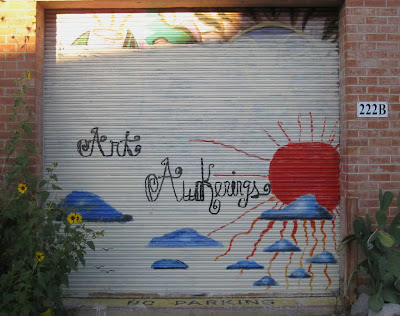 I've ridden by here quite a few times since I took this photo in mid-October 2010, but I've never seen the door open. A quick online search showed Art Awakenings at the address 450 N. 6th Avenue — which Google Maps says is on the other side of the building from this alley door. I'll put it in my list of places to check...
Posted by Jerry Peek at 8:22 AM No comments:

So far, I think, all of the murals we've posted here have been one-of-a-kind, designed and created for the spot. That's not true of all the murals in town, though. If I'd stood closer to the two handsome murals on the BJ's Restaurant & Brewhouse location at 5510 East Broadway last month, maybe I'd have noticed.

But wait: is this supposed to be an exposé or a confession? Right. Here's the north side of BJ's location at 4270 N. Oracle this past weekend: 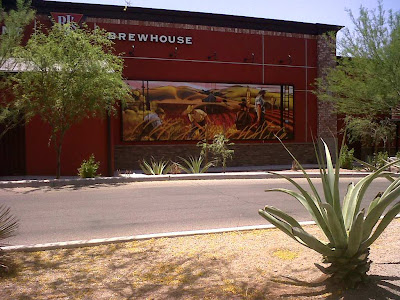 Looks identical to me — right down to the Mondrian-style lines and color blocks. Hey, BJ's, can't you afford to hire a muralist to make an original? (Maybe I should ask them before I accuse them. Hmmm. But hey, this is an exposé. :)
Posted by Jerry Peek at 6:32 PM No comments: 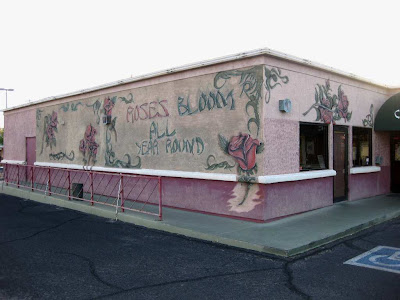 What perfect timing to come across these rose-covered walls on my early-morning Mothers' Day bike ride! Thanks to China Rose, 5101 E. Speedway (at Rosemont).

After a couple of recent mural shots, it's back to the archives. This photo was taken on October 19, 2010 — of photos of murals (or murals of photos?) on the west side of the building at 5th & Congress, to advertise the exhibition of artifacts from the sinking of the Titanic in April, 1912. Since then, the scene on that corner downtown has changed.

You've seen other work by muralist Joe Pagac on these posts — most of them announcing shows at the Rialto Theatre. (To find more, use the search box at the right-hand side.) Joe does great work, but there's so much of it that I decided not to try to keep up with it... and, instead, let you visit Joe's website.

When I drove by Bookmans store at Grant & Campbell yesterday, though, I saw a new Joe Pagac work in place of an earlier mural by other artists: 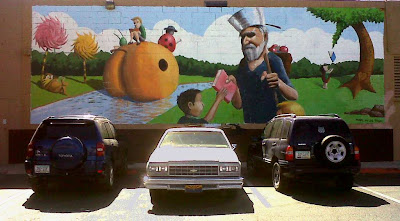 I'll bet that the Johhny Appleseed of books there in the foreground is Bookmans founder Bob Oldfather. (Or maybe the backstory is a completely different tale that I've never heard. If you have an idea, please leave a comment!)
Posted by Jerry Peek at 10:56 AM No comments: