Found on the north wall of the former Charlie's Comic Books, this mural is in the same spot but with a new store behind: Time Warp Gifts & Novelties.

See it while you can

BG Boyd is a Part 107 certified drone photographer based in Tucson. He's shared a number of his photos of Tucson murals (from his website BG Boyd Photo) with all of us on this blog. This post is the first of a series of his photos from land, aerial photos and videos. I'll also be updating some earlier posts on this blog with his aerial photos; after I'm done with that, I'll post a list of the ones I updated. In the meantime, check his website (link above) for a number of aerial mural videos and other photos… he's also on Instagram, Facebook and Twitter.

This Arizona Arts Live mural by Robb Harris is on a building that's about to be demolished. It's lost some paint since BG took this photo: 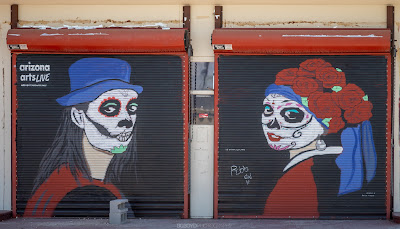 Hidden away at El Torero

Most of Danny Martin's murals are in black and white. This one is different because it has a pink background: 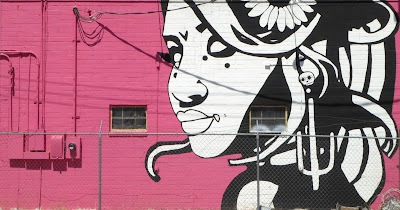 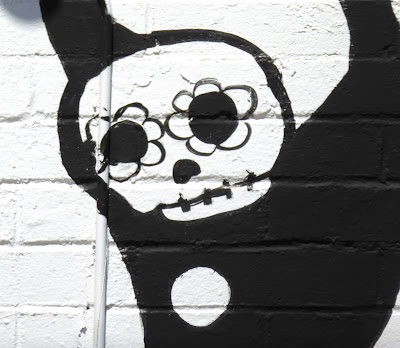 The mural is on El Torero Restaurant, but it's on the east side — which you can't see from the front of the building on 26th Street. You can see it across the street from the building at 1537 S. 4th Avenue. It's on the far side of a lot behind a fence along 4th Avenue. I took the photos with a zoom lens on June 30th.
Posted by Jerry Peek at 6:01 AM No comments:

Mike Rios (@mykerios on Instagram) painted that mural across the street from American Eat Co. and Market, which is at 1439 South 4th Avenue. Here's the right edge with his signature: 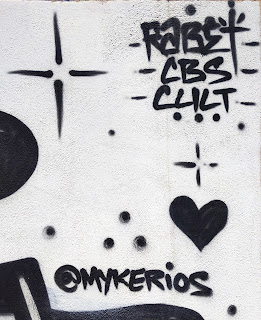 I snapped the photos on June 30th.

You can see closeups in today's post La Nalgona has neighbors.
Posted by Jerry Peek at 6:01 AM No comments:

Murals being made, part 64: Sahara Apartments 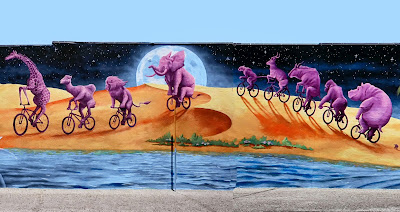 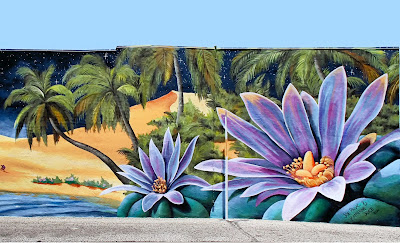 Joe Pagac wrote on Facebook November 15, 2020: "Katherine Joyce Lester and I just finished up this mural at Sahara Apartments on Stone just south of Speedway! A little African Peyote Oasis. Dung/Scarab beetle bringing up the rear courtesy of my nephew." I caught them painting on November 12: 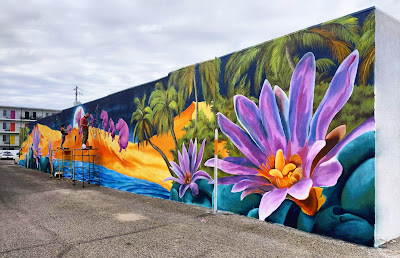 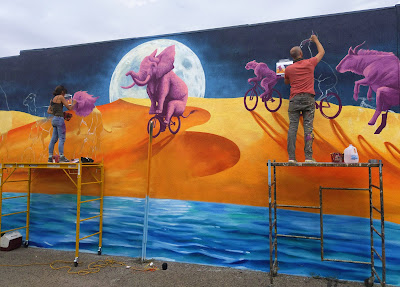 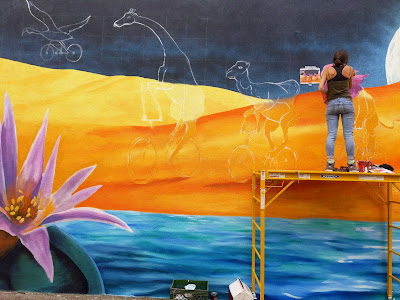 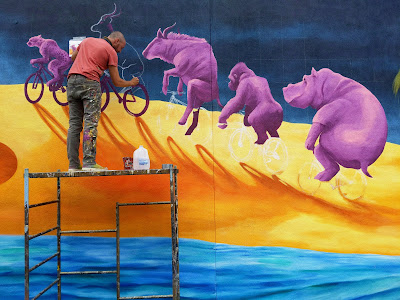 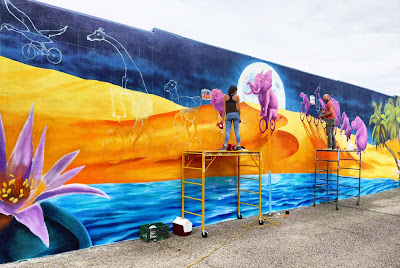 On Facebook, you can find Katherine at katherine.lester.14019 and Joe at joepagac.
Posted by Jerry Peek at 6:01 AM No comments:

If you've signed up to get email notifications of each new post (entry) in this blog, please read this.

Google (actually, Feedburner) is discontinuing the "Follow by email" box that's at the right edge of every page. It's in the first red box below: 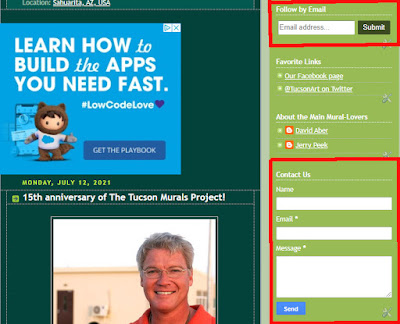 If you've filled in that box before, and you'd like to continue getting email notices, please use the "Contact Us" form shown in the second red box above. Tell us that you'd like to keep getting email. I'll collect your names and email addresses, then contact you soon. (I've set up a list on Mailchimp to send you notices.) Your name is optional.

If you haven't subscribed but want to, please watch the blog for an announcement of how to do that. Or, here are two other ways to follow the blog: Thanks for reading this blog!
Posted by Jerry Peek at 2:56 PM No comments:

Photographer BG Boyd has a lot of Tucson murals on his website! You'll be seeing some of them here a bit later this year.

This blog usually doesn't show murals outside of Tucson. But, when BG emailed yesterday to say that he has a new Sahuarita page on his website, I realized that I could publish a link here to let you see them if you'd like. Many are by Tucson artists:

bgboydphoto.com/murals/sahuarita
Posted by Jerry Peek at 6:01 AM No comments: 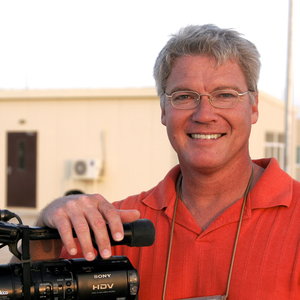 “The initial idea behind the Tucson Murals Project was to complement Tucson's Downtown redevelopment. It seemed to me that the city was leaving out a great idea for Tucson tourism: a map for tourists to drive and find Tucson's beautiful wall-size pieces of art.”

He passed away in 2013. (I hope we're doing you proud, Randy.) There's lots of info about him — though with many links out of date — in the post Farewell, Randy....

In today's 15th-anniversary edition, I'll take you through the 15 most popular posts from the past 10 years. (Blogger's statistics don't cover 15 years.) If a post has more than one photo, I'll choose one; you can click on the link underneath each photo to see all of the photos in the post — actually, all of the post. 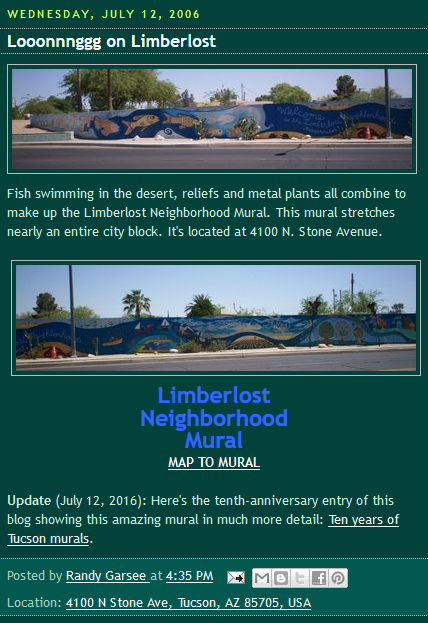 Now, the most-viewed posts, starting with the most popular. After each photo is a link to the actual post. After you click on that link, use the "back" button or arrow on your browser or phone to come back here.

This is the north side of the famous Hippie Gypsy store on 4th Avenue: 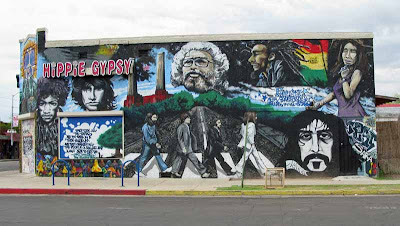 Luis Mena has been painting (and sculpting and …) for decades in Tucson. This mural of Benito Juarez is dated August 18, 1981: 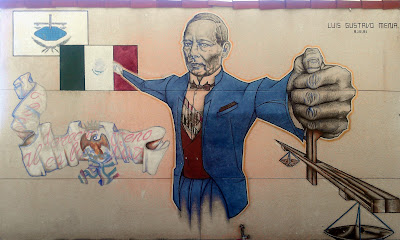 The Tucson Portrait Project took the photos of 6,000 Tucsonans. The plan was to make them into a series of murals lining the underpass, but the project ran out of money:

The mural is/was on a stand-alone wall on a (mostly) unused lot in the back of the school:

There are/were two murals on a storage shed at Smitty's Car Wash. Here's one:

The front of the store has/had a full-width mural:

Feldman's is a National Historic District:

The mural is behind a fence, but David Aber was able to get in:

At the end of the driveway of a private home, Wile E. Coyote and the (beep beep, or maybe meep meep) Road Runner: 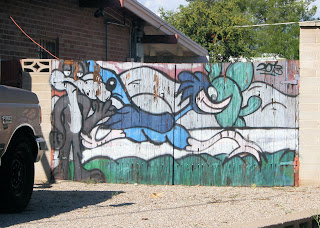 Of all the schools David Aber had visited by this point, Rincon High had the largest mural by far: 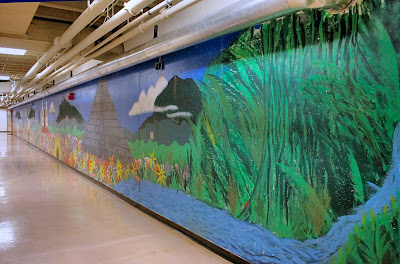 The original post has a series of close-ups:
February 15, 2017: Rincon High 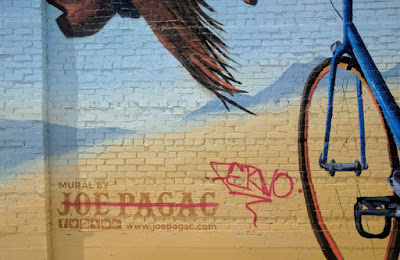 Joy Maestas sent photos of murals by her son Ben Maestas in their back yard. All four murals are completely different — and very good. Here's the first section of wall: 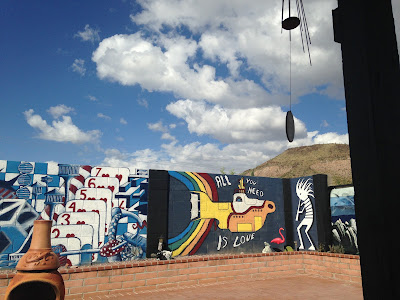 One of Tucson's biggest murals, it's filled with Western vistas and humans in animals' bodies. Click on the link for the blog post to see lots of close-ups. 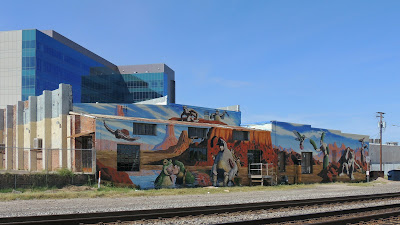 A number of electric substations around Tucson have murals. Here's one: 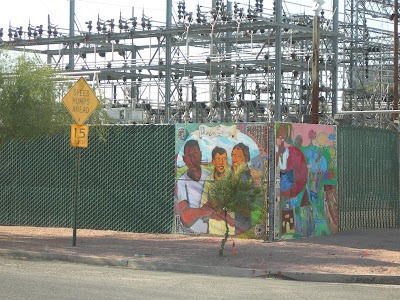 This is part of a long series showing Jos Villabrile wrapping the building in murals: 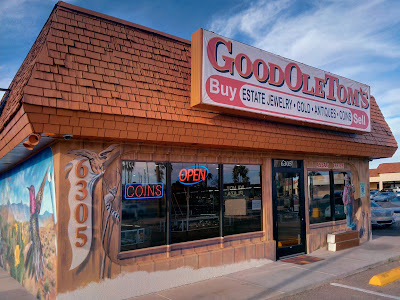 There are more than a thousand other murals on the blog. If you're new here, have a look around! There's an introduction, tips for getting around, and some history too, in the page About this blog.

I'm aware that this blog isn't easy to see on mobile phones. I'm hoping to fix that in the next year or so.

Stay tuned for the next fifteen years!
Posted by Jerry Peek at 6:01 AM No comments:

Facing the Memorial mural for Samantha Silverman in our previous post is a mural on the south wall of Amazing Discoveries. Quetzalcoatl is the feathered serpent god of the Aztec and Toltec cultures. 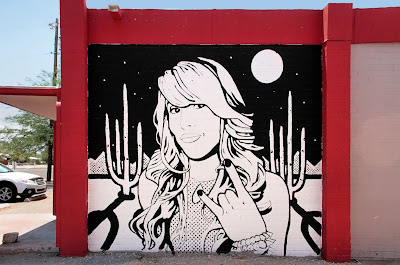 He wrote on Instagram: "When I’m hired to do a tribute mural for someone who has passed away, i try to put some extra care into it…"

Another mural faces this one. There's a photo in the next post, Friday.
Posted by David Aber at 6:01 AM No comments:

Look quickly! Too late; it's gone.

Sunday, June 27, I saw a post on Instagram about a paste-up mural in front of the former Wig-O-Rama on Scott at the southeast corner with Congress:

Monday, June 28, I stopped by near sunrise. “You snooze, you lose.” Here's a closeup of what was left: 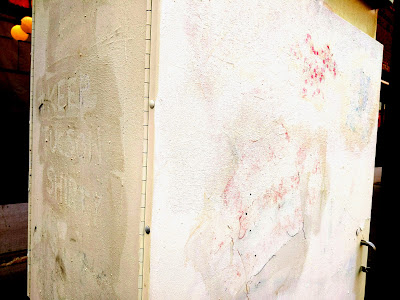 (I used a photo editor to raise the contrast a lot to make it easier to see. In person, it was almost invisible.)
Posted by Jerry Peek at 6:01 AM No comments:

I just came across Tucson Murals & Music on Instagram, @tucson_murals_and_music. The top of their page says:

Tucson M&M was created to highlight local art + music. We love our town & are stoked to share a piece of it with you. @brycejrogers #tucson #az youtu.be/PVCNiPtXLv0

That YouTube link is one of their videos.
Posted by Jerry Peek at 6:01 AM No comments: