The Legacy of Cesar Chavez 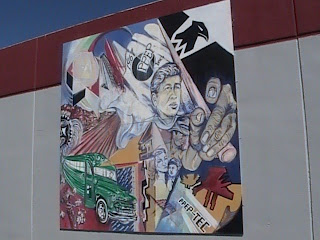 One not easily found, because it is in an industrial area off Benson Highway, is the PPEP mural that honors Cesar Chavez and also depicts the original 1957 Chevy bus “La Tortuga” (tortoise) that was used when PPEP started in 1967. The artist is Luis Mena.
Submitted by Neil Amstutz
Update (September 9, 2012): Thanks to Google and an article about the PPEP Farmworker Hall of Fame, I (Jerry) found the mural. It's at 802 E. 46th Street.
Posted by Randy Garsee at 6:45 PM No comments: 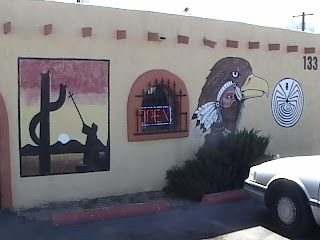 Directly across Ajo from Hollinger Elementary (133 W. Ajo) is this office building with a silhouette of a Native American gathering fruit from the top of a saguaro cactus. There is also a Native American and a bird and the Tohono O’odham “man in the maze”. Artist unknown. Submitted by Neil Amstutz
Update (September 16, 2012): The mural has been painted over in bright green (to match other buildings nearby) and this is now a T-Mobile store.

Posted by Randy Garsee at 6:40 PM No comments:

It's Elementary, My Dear Hollinger.

Submitted by Neil Amstutz:
"At Hollinger Elementary near 6th and Ajo
is this mural that appears weathered by
our desert sun. An Arizona flag appears
with smaller flags of America and Mexico
overlaid on it. There is also a saguaro
cactus, a palm tree and some depictions
of desert creatures. Artist(s) unknown." 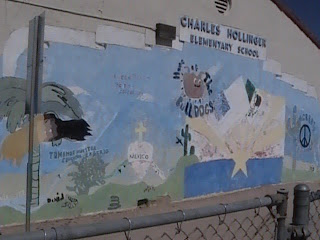 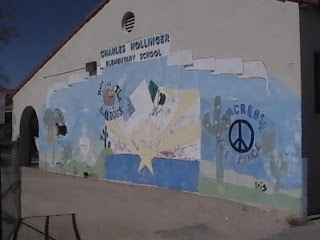 Posted by Randy Garsee at 6:04 PM No comments:

Neil Amstutz submitted the pictures below and wrote:
"At Park Avenue and 30th Street is a
yellow building with Winnie the Pooh
overlooking a dirt lot that may have
been for a day care." 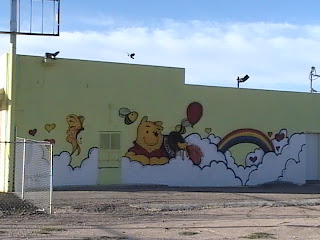 On the block wall on the opposite side of the dirt lot
is a long stretch of popular characters that include
Jiminy Cricket, Oscar the Grouch, Dalmations, Huey,
Dewey and Louie, Cars characters, Tigger, Mickey
Mouse, Pinocchio, Pokemon characters and a few others. 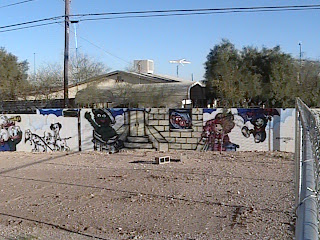 The artist's name is written 'by Billy Sanchezs'." 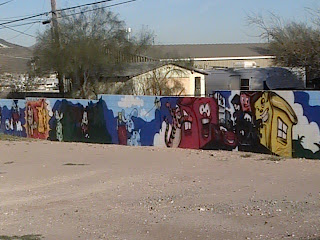 Update (June 11, 2017): Randy had made the intersection (Park Avenue and 30th Street) into a link to a Google map. That link didn't work anymore. So I've put the exact street address in the "Location" line below; If you'd like to see a map, click it.

Also, the most recent Google StreetView, October 2016, shows that the business is named My Little Angels Daycare. That StreetView also shows that the first mural in this blog entry (Winnie the Pooh) was still there. The second mural had been covered with some play equipment and at least one fence.
Posted by Randy Garsee at 1:09 PM No comments:

Holy Mural! It's Painted Over!?! 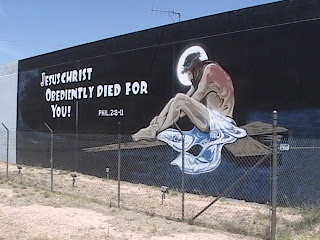 Neil Amstutz e-mailed this photo and wrote that this mural "used to be on Alvernon south of 29th street on the tattoo parlor. The wall has since been painted white unfortunately. I do not know how long the mural had been there." Amstutz took the photo in May 2007.
Does anyone know the artist? If so, e-mail me: randygarsee@gmail.com
Posted by Randy Garsee at 10:48 PM No comments: 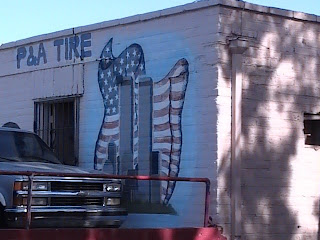 Neil Amstutz wrote about this mural that it

"used to be at Mission and Ajo at Pancho & Angie’s tire shop. Unfortunately, I could not get there any time when the lighting was decent [or] that someone wasn’t parked in front of the mural. It showed the Twin Towers. Also unfortunately, this mural was also painted over this past summer. I think it had been there since early 2002."
If you know the artist's name, please e-mail me: randygarsee@gmail.com
Posted by Randy Garsee at 7:28 PM No comments: 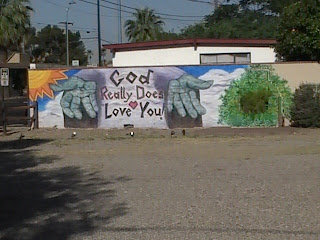 This mural is located on "westbound Broadway at Columbus. This mural is still there."
Submitted by Neil Amstutz
If you know the artist's name, please e-mail me: randygarsee@gmail.com