A twenty-year Tucson tradition is the mural called “The Thinkers.” It's just east of 4th Avenue on the south side of 6th Street. Randy showed it during 2009 in the entry Mural Montage: A Tucson Favorite.

In the last year or so, a tagger trashed the mural with huge graffiti garbage. Maybe the same criminal was the one who also tagged a great mural half a block farther west along 6th. Anyway, The Thinkers was one of my favorite Tucson murals… I was angry and heartbroken.

Then, this past weekend, Allison Miller posted to Facebook that the original artist, Eleanor Kohloss, had repaired the mural. And Eleanor replied: 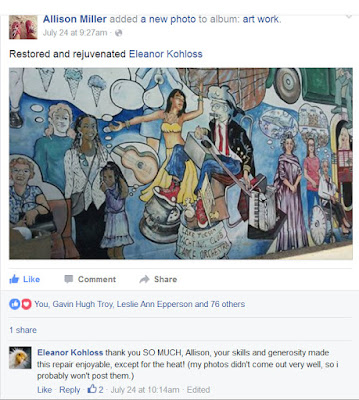 I raced downtown the next day to get photos (partly with the hope that I'd get there before the same tagger came back to vandalize the same mural again). I made it.

Next, three photos from left (the east end) to right (west). The middle photo is mostly the bus stop which was added — very unfortunately — since the mural was painted in 1996. (Wouldn't a simple bench have done the job? How about moving this artistic bus stop a couple of blocks farther along 6th Street?? Sigh.) 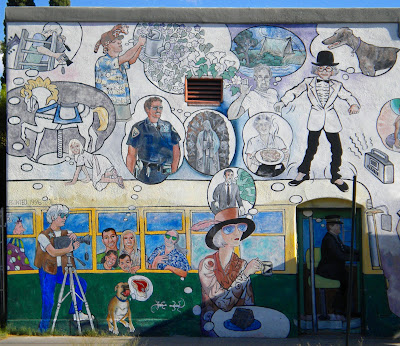 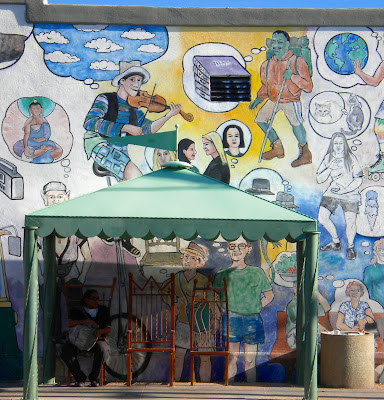 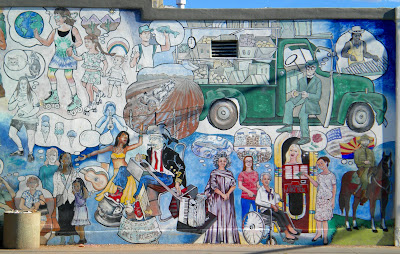 Although you've really gotta stand in front of this mural to appreciate it, here are a few parts that were easy to photograph. (The dog/people and their “thought bubbles” are mostly intertwined, so it's hard to snap just one part of the scene.) The first one is at the bottom of the left third: 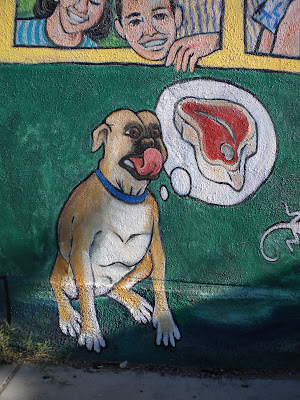 This couple, thinking of each other, are above the bus stop roof: 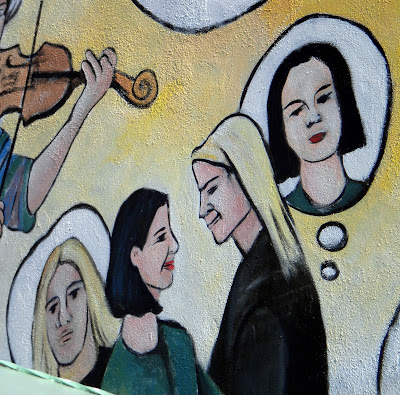 And in the middle of the right half: 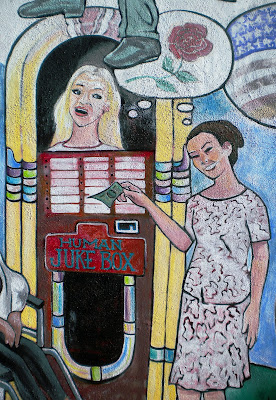 Update (August 21, 2016): Eleanor wrote on Facebook “I had lots of help from Allison Miller who besides being a mom, full time employee at [Arizona-Sonora Desert Museum], mural artist in her own right, and VOLUNTEERS to repair tagged murals. She climbed up and repainted the figures over the bus shelter the time before this last tag. It is such a fragile wall, we have been looking into coatings but it might not be able to withstand the power wash to remove the spray paint.”

Update (August 19, 2022): I got email from a man named Douglas and his sister Vickie. He wrote: “My mom is the waitress holding the plate. She worked at Caruso's restaurant for 32 years.I worked there as well a couple summers as a bus boy when I was in high school in the late 70's. My brother worked at the bar next door. Everybody called her Mom.” Here's the part of the mural showing Mom: 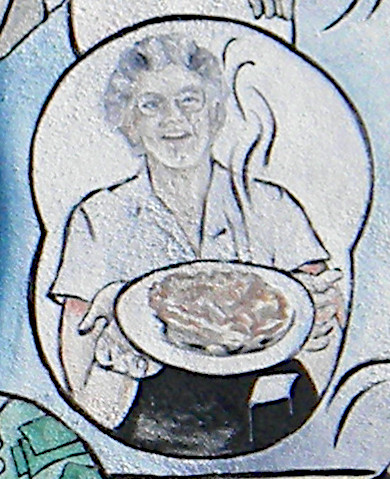 Later, Doug added: “I did read about Eleanor Kohloss who painted the mural in 1996 that she captured some locales (my Mom) as well as some are fictional. My brother did tell me that Mrs. Kohloss asked my mom if she could put on the mural. My mom was honored to have her do that.”

Now all we need are stories about the other zillion people on the mural! I'd really like to meet Eleanor some day.
Posted by Jerry Peek at 1:37 PM No comments: 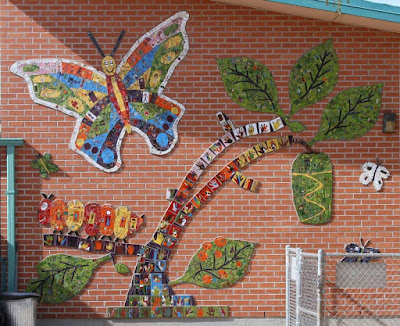 Click on any photo for a slide show of larger views.
More murals from Whitmore were posted in 2010.
Posted by David Aber at 6:01 AM No comments:

As with our previous entry, Maybe a mural, part 69: Streetcar platform, you might not consider flat painted figures on a wall to be a “mural.” Please be our guest and decide for yourself! This is on Broadway Bicycles at 140 S. Sarnoff Dr.  Photographed on June 25, 2016. Click on the photo for a larger (and sharper) image.
Posted by David Aber at 6:01 AM No comments:

From time to time over the past ten years, we've shown a piece of art that's usually flat but wouldn't always be called a mural. We call the series “Maybe a mural.” An example is this platform on N. 4th Ave. between E. 6th & 7th Sts. 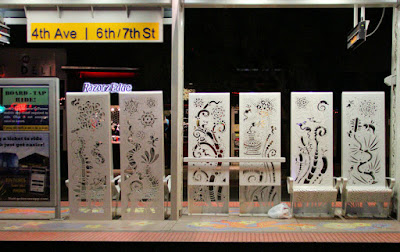 The artists are Peter Goldlust and Mary Lucking.
Photographed on May 29, 2016.
Posted by David Aber at 6:01 AM No comments:

What caught my eye first was the mailbox in front of this home; you can see it by clicking there (on the Tucson Mailbox Art blog). When I got out of my car to snap photos of the mailbox, I spotted some more-subtle tile work on a mural at the end of the home's driveway: 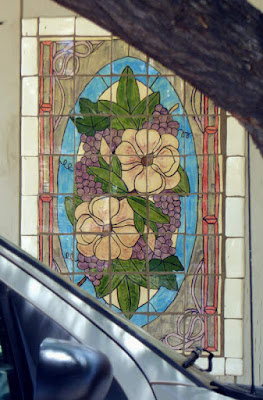 We don't go onto peoples' property to take photos, so I stayed on the street and zoomed in to catch the mural — which was partly hidden by a vehicle and a tree limb.

My original photo — on May 17th — was with a camera that can't zoom in very well; it turned out to be too blurry. So I came back on July 11th to make this shot.

Posted by Jerry Peek at 3:11 PM No comments:

Today (July 12, 2016) marks the start of the second decade of Tucson murals on this blog. Randy Garsee started The Tucson Murals Project blog on July 12, 2006, with the entry Looonnnggg on Limberlost. Randy showed only a couple of photos of this blocks-long mural (on the east side of Stone Avenue north of Limberlost). So David Aber and I went back on June 12th of this year to cover every inch of it.

Let's start with a video (84 seconds long) showing the mural from north to south.

(You can also click for a full-size page view of the video.)

David also took 16 photos of the mural and carefully stitched them into (very wide!) panoramas. We'll show each of them three ways:
Here's the left side:

Click to see the left side full-size. Next, the right side:

Click to see the right side full-size. If you'd like to see the whole mural, here it is:

Click to see the whole mural full-size. In case you can't see those panoramas, later (at the end of this entry) I'll show each of the photos that David used to build the panorama. While Dave was shooting the complete mural, I snapped shots of parts that I especially like… 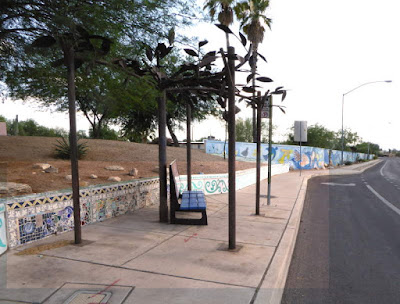 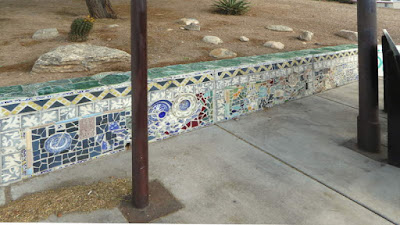 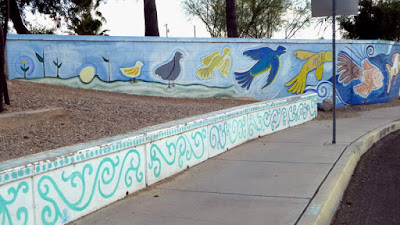 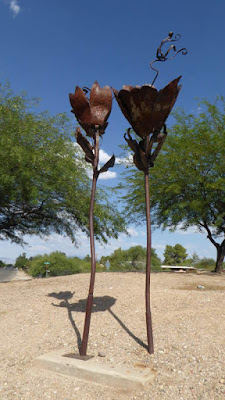 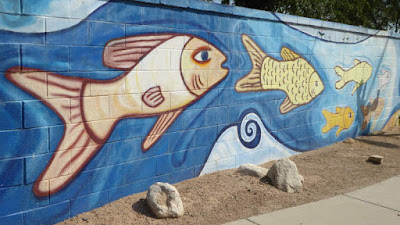 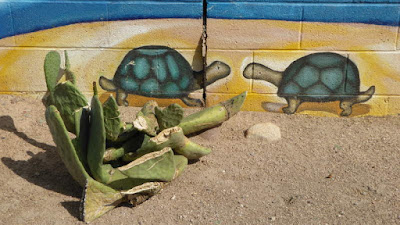 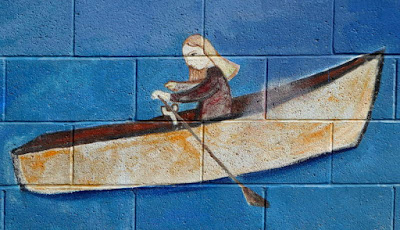 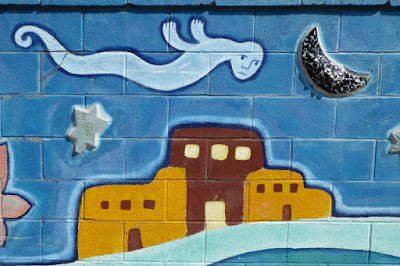 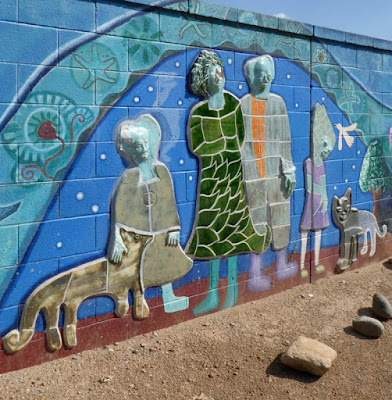 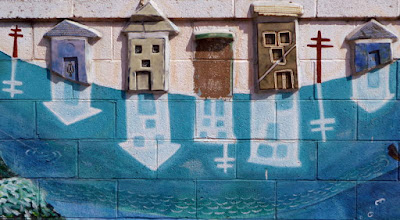 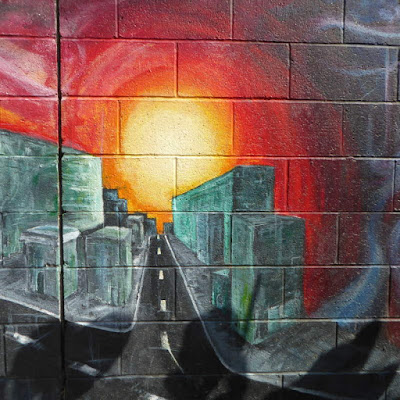 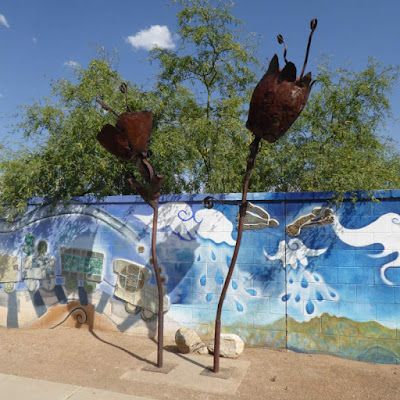 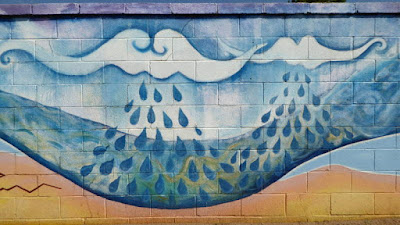 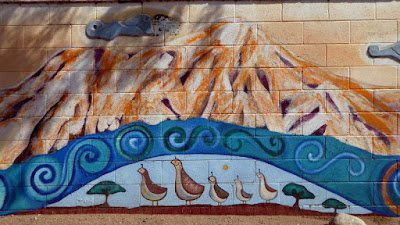 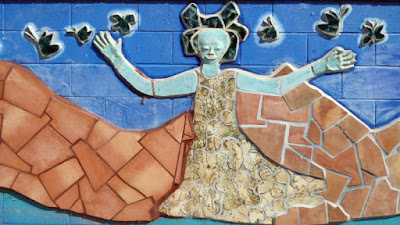 To finish: In case you didn't see David's panoramas above, here are the 16 photos he used to build the stitched panoramas. He used the expansion joints along the wall to have uniform widths… so the individual photos below are chopped in ways that may seem arbitrary. Also, some of the photos have more background than others in order to get a full view of the metal sculptures in front of the mural. With all of that said, here are his photos:

The tall steel flowers were made by Kim Young, the founder of BICAS.

Oh, and just south of the mural is a mailbox mounted on a pair of scissors.

Next: On to another ten years of Tucson murals!

Update (January 11, 2022): The mural is finished. There are complete before-and-after photos in our December 31, 2021 post New Year, New Mural. There are close-up before-and-after photos of parts of the mural in today's post Stone Curves mural: before & after close-up photos. Today's post also has lots of information about the mural's history and the repainting.
Posted by Jerry Peek at 11:59 PM No comments: