Murals like these are the kind that keep me hunting for more. I found them at the end of May, just west of Country Club around a home at 2939 E. Monte Vista. The top one is titled Mary's Wonderfully Whimsical Ways: 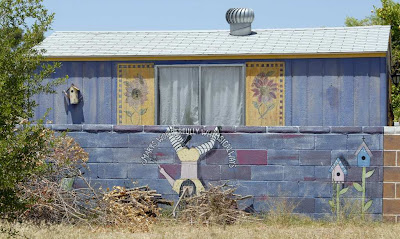 The second mural also looks like something Mary painted, doesn't it? Some day I'll head back to the neighborhood to see if I can get the story. (If you know, please tell me...)

Update (December 24, 2012): Thanks to the comment that Mary's daughter Crystal left recently (see below), we've got the story of the bottom mural. The top mural of a woman with paintbrushes must be Mary herself! I've also posted more details today.
Posted by Jerry Peek at 6:37 PM 2 comments: 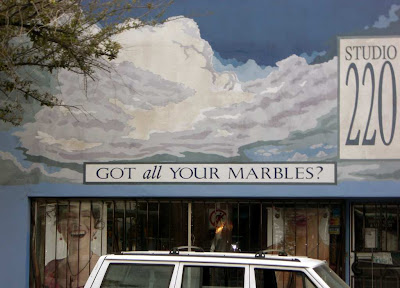 Thanks to Melo King for this photo of 220 E. Congress. The sign says Studio 220, but there's also a business named Got All Your Marbles? that sells interchangeable marble jewelry.

Happy Thanksgiving to all of you mural lovers!

Update (August 4, 2013): Mark Fleming just sent another photo of this same mural. It seems to be in good shape (which quite a few murals aren't these days: many are being trashed by taggers... sigh). I'm guessing that its position above the store's window helps protect it.
Posted by Jerry Peek at 5:56 PM No comments: 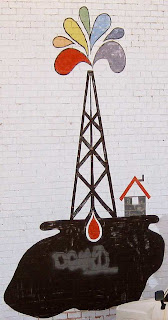 Something about this humble image — a mural in the style of the store's front sign — caught my eye. I shot the picture back in August, but didn't post it until today. And now the Print Well store, formerly at 2310 E. Broadway, has moved to the back of the building. The sign on front is gone, and mural (and the tag) are covered with a fresh coat of white paint.
Posted by Jerry Peek at 12:05 AM No comments:

Howell Elementary School has two mural-covered buildings near the corner of Longfellow & Holmes (just south of 5th Avenue). Classes weren't in session while I was there in May, and the gate was open:

The walls are covered with desert scenes of critters making music:

Above them all is the slogan "Opening Minds Through The Arts": 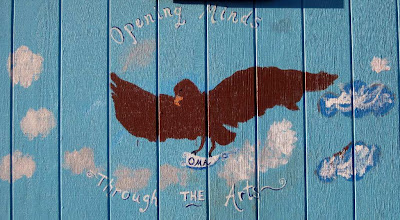 Mural-spotter extraordinaire Melo King sent photos of two longggg murals by the bus stops/underpasses along Speedway at the U of A. The first is over Olive, between Mountain and Euclid:

The second is over Highland, between Mountain and Cherry:

Update: As always, you can click on an image for a larger view. Use your browser's "Back" button to return. And you might want to try that on the last photo above. On February 16, 2011, while I was waiting for a bus at the stop next to the mural, I spotted some UFOs that weren't on Melo's original picture. Did the original muralist add them, or was it a clever tagger? I snapped the photo below... 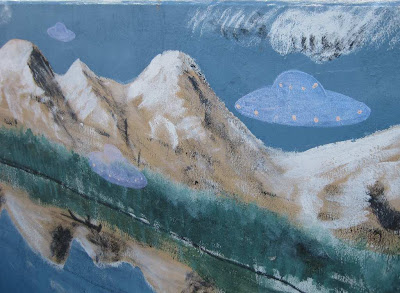 Update (January 21, 2016): For more-detailed photos of the Olive mural more than five years later, see today's entry Over Olive again.
Posted by Jerry Peek at 10:53 AM No comments:

(Not a) ratty mural

This fun mural fits the business as well as the building. It's at Desert Rat Truck Centers, 3705 S. Palo Verde:

Posted by Jerry Peek at 7:53 AM No comments: