Update: I took these photos on April 3rd. Since then, the walls were repainted April 24th! 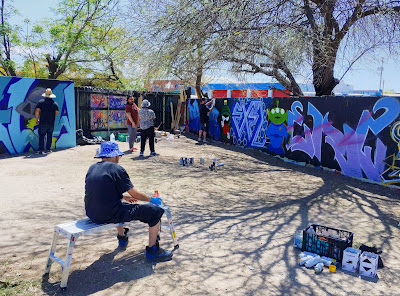 Thanks to Monty Ses Esposito (he goes by “Ses”) for inviting me to meet a lot of Tucson muralists, some of whose work I'd seen for years but hadn't met in person. It was a Grill & Chill BBQ with maybe 20 artists repainting the wall we showed in our November 2, 2021 post Graffiti mural gallery in South Tucson.

Ses told me the story of the place (on the north side of the wall; you can see the south side in that previous post). There used to be a house that burned down. The site became more and more run-down until a group of muralists got together to clean it up and paint. The group when I was there on April 3rd was chill: I felt right at home with a bunch of friendly people, ages from children up to (I'm guessing) 50s and 60s.

I'd never heard of Barrio Restoration until Ses told me that they came to the site after the big cleanup and hauled away the mountain of trash. Here's their Facebook page. A year ago, KOLD-TV News 13 and Casino del Sol named Barrio Restoration one of “Arizona’s Heart and Sol.” After the day's painting finished, Barrio Restoration posted the video below, “To the hood from the hood. Carne Asada vibes with the homies today.” (If you can't see it, here's a link to their Facebook video.)

Like several other muralists I met there, Ses has been painting in Tucson since the 1990s. He said that, back then, when Tucsonans saw people painting urban art, they'd be afraid, as if they were in danger. That's completely changed: Now people stop by, say hi and visit for a while. (He's also painted more-traditional murals, like the Greetings from ARIZONA mural we showed on October 8, 2021. 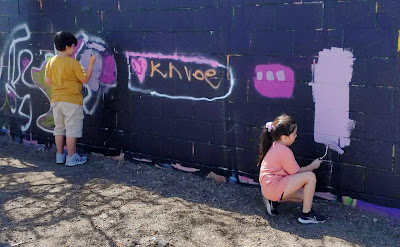 Next, photos of older :) artists at work: 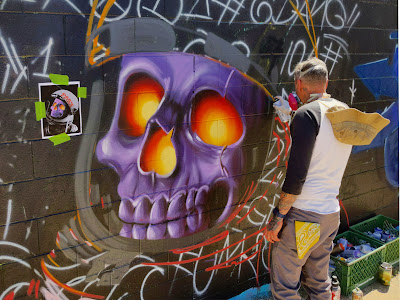 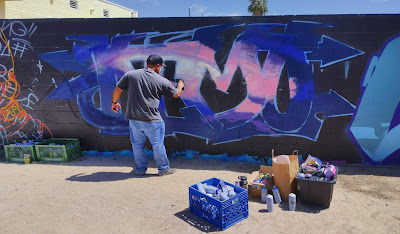 It looks like the artist in the last photo was painting a galaxy or something else spacey within the letters. I was interested to see the finished mural — actually, all of the murals — when I came back in a few days.

(Note that although everyone was painting legally here, some graffiti artists don't want their faces shown. So I took all photos from behind.)

I came back on April 5th and 6th to take photos of the completed murals. Let's start with a three-photo overview: 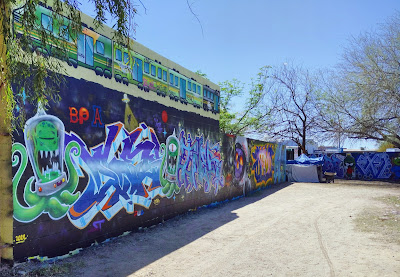 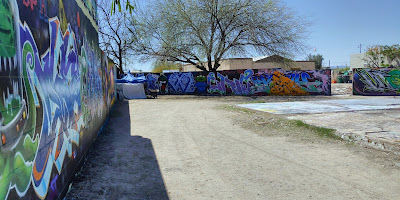 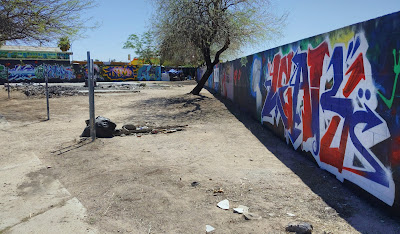 The wall is L-shaped; the short side runs from north to south, then turns at the corner with the long side from east to west. When I came back on April 5th, a homeless man had set up camp in the corner of the L. The past weekend, the artists gave him one of their tents, he told me. The tent covered some bits of artwork, but nothing as finished-looking as the rest of the murals. He does the same as the artists: walks the alleys and cleans them up. They come by fairly often to paint; he gets to watch.

Below are photos from the left (north) end to the right (west). First, two murals near the ground with a subway car mural at the top. The top mural was there so each artist can paint their tag on a car — just like a subway car in, say, New York City. (I don't support painting ilegally, but it's true that a lot of muralists got started that way. I talked with a couple of artists here who did. Another is Rock “Cyfi” Martinez… I read his story in the old Tucson Citizen newspaper many years ago.) 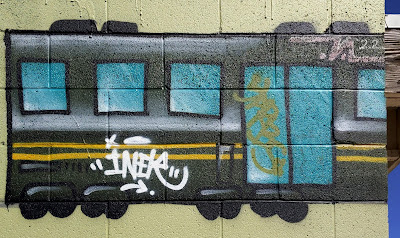 The two murals above, under the train, by themselves: 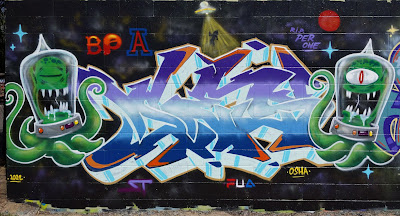 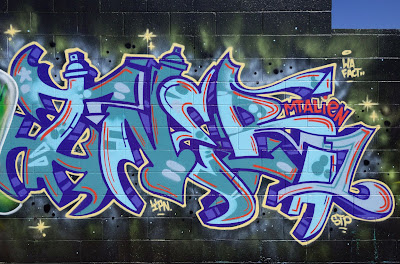 The next three from left (north) to right (south): 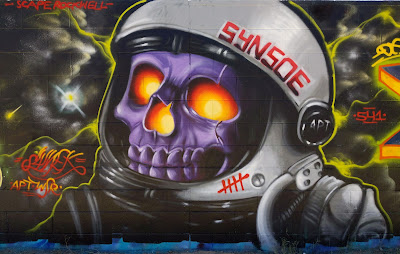 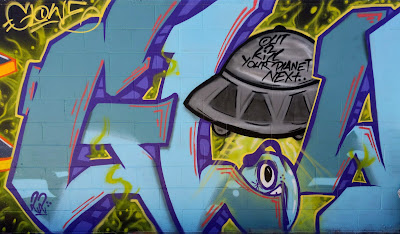 Along the long wall, from east (left) to west (right): 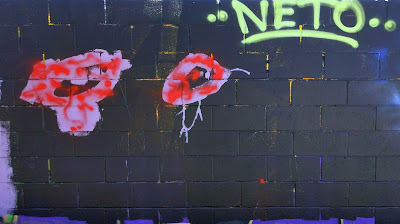 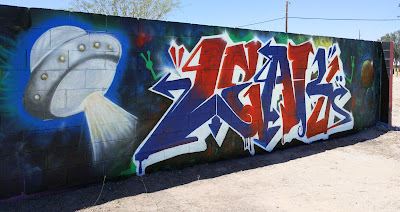 The artists keep refreshing this wall — and the other (south) side too. When you're on 6th Avenue, turn west on 36th (there's street parking) and check out the latest.
Posted by Jerry Peek at 6:01 AM No comments:

Hollinger K-8 school has two murals you can see from the street. Here's one on the Sarah Barchas Library / Media Center, photographed by David Aber on February 21, 2022: 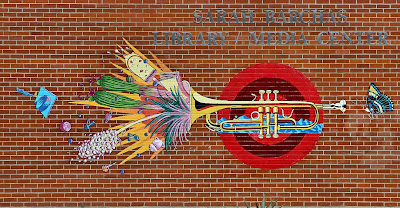 Long-time contributor Mark Fleming, who's sent a lot of mural photos over the years, photographed the same mural on February 12, 2021. He sent an overall photo like David's as well as these closeups: 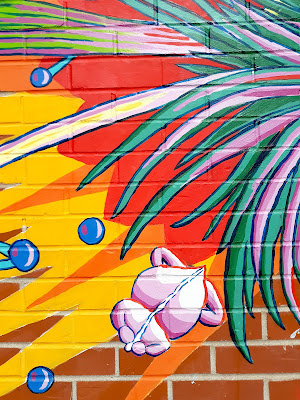 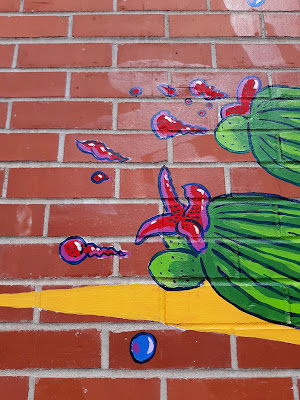 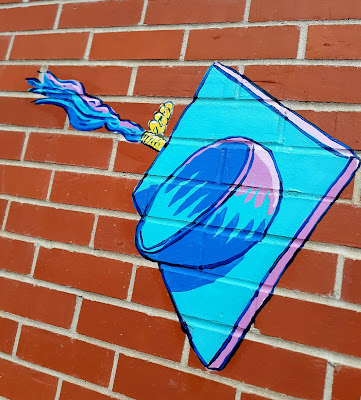 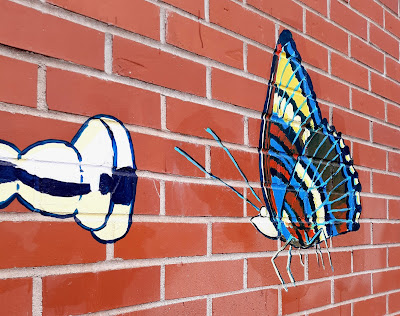 Both David and Mark spotted another mural nearby that they couldn't see very well from the street. I drove by on April 4, 2022 and noticed that the parking lot next to the mural was open. So I grabbed a few photos of it: 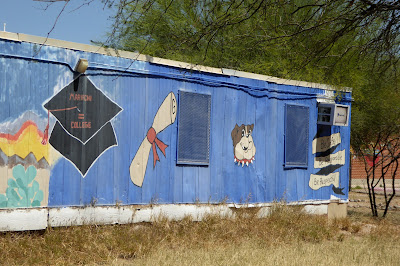 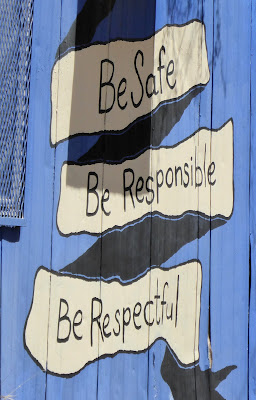 On March 4, trying to avoid construction on Broadway, I drove a few blocks south on Plumer Avenue and spotted this mural: 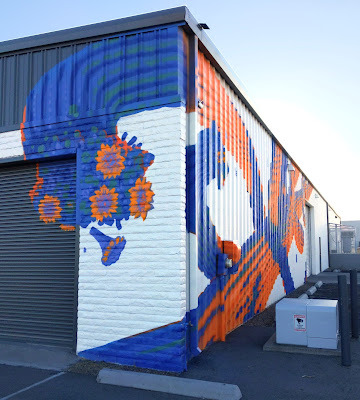 The artist was Rock “Cyfi” Martinez.

Notice the blossoms on the right-side roller door that have popped off.

He signed the mural at the top right corner of the north side: 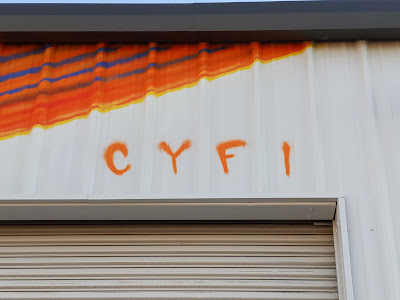 Cyfi has painted a lot of different styles over the years. (To see them, here are posts labeled with Rock "CyFi" Martinez. That link opens in a new window or tab.) If I'm right, this style — with a white background — is new to Tucson. Another mural like this is at Goodwill Industries Headquarters.

Update: Google Maps Street View shows that the mural was there as early as January 2021. So maybe this “style” of Cyfi’s isn't that new…
Posted by Jerry Peek at 6:01 AM 1 comment:

The ocean and more

It was October 18, 2009 when we posted a few closeup photos of a long mural along the parking lot that faces Paseo Redondo downtown. (Click on the “Location:” link below for a map.) The post was titled Parking by an ocean…. In September, 2014 I took closeup photos of the whole mural but never posted them… until now. Here they are, from left to right:

The Tucson Water Department building is behind.

Update (November 25, 2022): BG Boyd Photography sent several of his aerial mural photos, taken October 22. They give you a good idea of how big this mural is. Here are two: 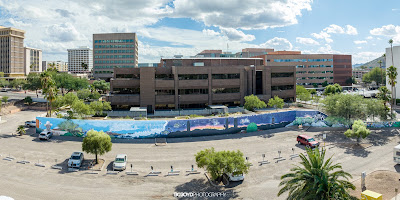 (As always, you can click on a photo for a larger view.) Thanks for helping us get perspective on this, BG!
Posted by Jerry Peek at 6:01 AM No comments: