When I searched online for merry christmas graffiti, this mural was in all of the first 10 or 20 results: To see the video by itself, here's a YouTube link: https://youtu.be/J-QEFlIp9uk. There are more photos of the mural on the Graffiti & Street Art blog page titled Merry Xmas by Homer & Bart Simpson!.

I asked Graffiti Life (who painted the mural) where it's located along Brick Lane — so I could give you a tour of the art-lined street on Google Street View. They told me that it's been painted over. (It was painted in 2013, I think.)

I hope you're having — or had — a peaceful Christmas (and that Santa made it out of your house alive!).
Posted by Jerry Peek at 6:01 AM No comments:

As I was looking through the artists in this year's Open Studios Tour (from Arts Foundation for Tucson and Southern Arizona), I saw a mural in Jenna Tomasello's listing. I wrote to ask where the mural is, since the number on the mural is 5630 but the Tucson Acupuncture Co-op is at 204 East Fort Lowell. She wrote that it was on a former building of theirs on Pima Street, that they were going to have their handyman paint over the lettering but were planning to keep the sunset portion. When I stopped by on December 9th, the whole mural was there, but parts of “ACUPUNCTURE CO-OP” were partly covered by an “AVAILABLE” sign. So I asked Jenna if I could publish her photo from her OST web page. Here it is, followed by the new sign toward the right edge of the lettering: 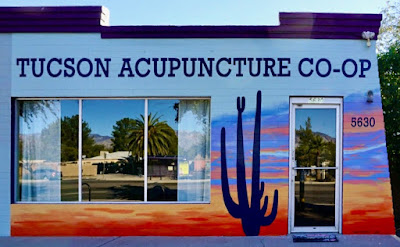 (Yes, the right wall of the building isn't straight; it's like little stairsteps.)

She signed the mural at the lower right:

Thanks, Jenna, for the mural and for the photo!
Posted by Jerry Peek at 6:01 AM No comments:

The roll-up doors on the stadium have new murals. I saw them as I was driving by on November 14th: 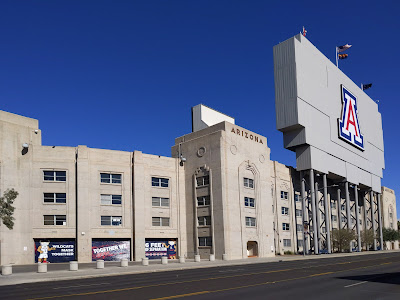 This mural of the Virgin Mary was found Nov. 11 on the south wall of the Beverage Barn.

Next to Danny Martin's mural of Ted DeGrazia on the mural-covered building at the corner of Toole Avenue, 6th Avenue, and Alameda Street, Danny painted a new mural: 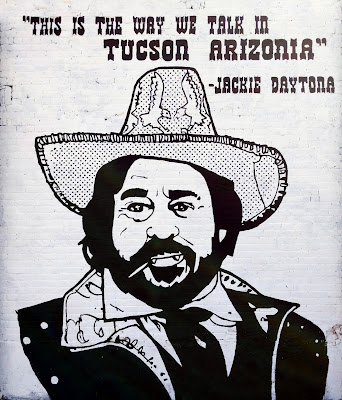 This is great fun. The character Laszlo (played by Matt Berry), who is actually a vampire, takes on the alias Jackie Daytona. If you don't know the series, you really should read Recap / What We Do In The Shadows Season 2 Episode 6 "On The Run" for the wild details. As that synopsis says, Jackie Daytona is an impressive, hyper-competent bar owner that everyone likes. He says "This is the way we talk in Tucson, Arizonia": (You can see that video fullscreen in What We Do in The Shadows - Jackie Daytona Moments. The Arizonia line is at the time 0:41.)

At the corner of Kino Parkway and 36th Street is a recreation complex named for Quincie Bell Douglas:

I found her biography and a photo in The Douglas Archives. She was born in Oklahoma Indian Territory in 1905, moved to Tucson in 1933, and died in 1986. Also:

Quincie Douglas became active in the Model Cities program that brought neighborhood centers, sidewalks, street lights. and neighborhood food programs to the poorer sections of Tucson. Her major accomplishment in Tucson was the Low Income Free Transportation Service (LIFTS) program that is still in operation today.

You can see a LIFTS van in the mural above. The mural is outside the library entrance. This plaque is underneath: 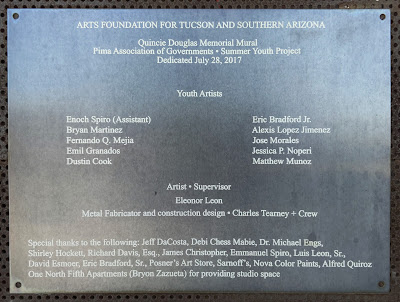 I visited in 2010 when there wasn't as much art. If you'd like to jump back, click on Quincie Douglas Center.

Before I checked out the other art nearby, I looked out back to see if there was any there. I found the sign for the garden: 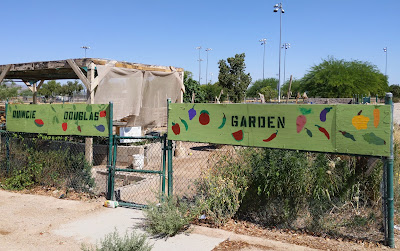 There are two benches outside the recreation center. The first one is along the walkway between the library and rec center entrance:

Here are closeups, left to right: 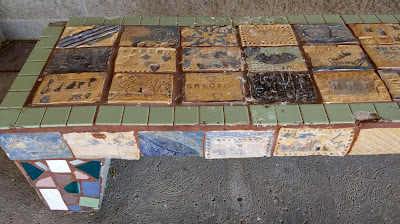 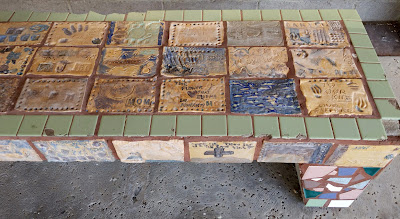 (As always, you can click on a photo for a slideshow of larger images.)

The other bench is near the entrance to the recreation center:

Again, from left to right: 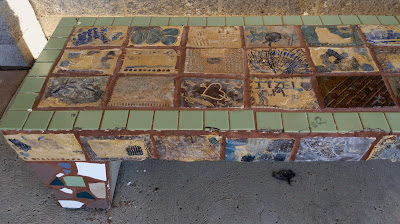 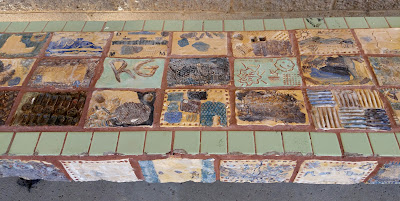 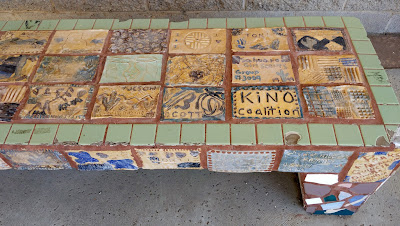 There's another mural, dedicated to the Buffalo Soldiers, to the left of the rec center entrance (there were a couple of glare spots): 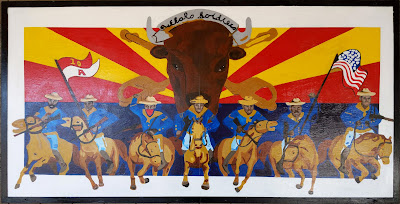 And the plaque underneath: 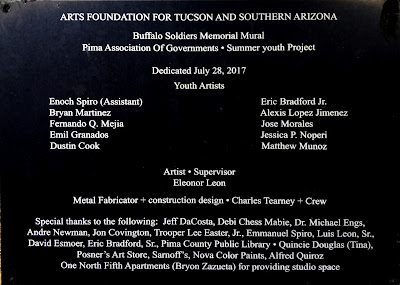 I visited on June 3rd.
Posted by Jerry Peek at 6:01 AM No comments:

Mural on a dead-end street

Toward the south end of the Barrio Viejo, on a broken part of 9th Avenue, is a mural that Jessica Gonzales painted earlier this year: 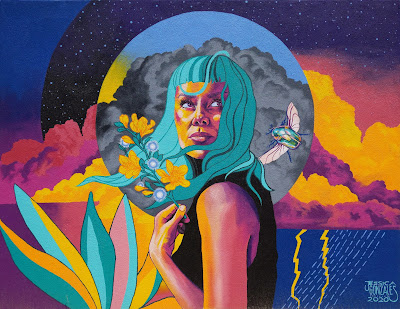 Thanks to David Aber for finding it and giving me exact directions. (The best way to find it yourself is by clicking on the address at the end of this blog entry to get a Google Map.) I snapped the photo on September 25th.
Posted by Jerry Peek at 6:01 AM No comments: