The World at 14th & Herbert

Just north of the corner of 14th Street & Herbert Avenue, at the south side of the Safford K-8 Magnet School, is this mural: 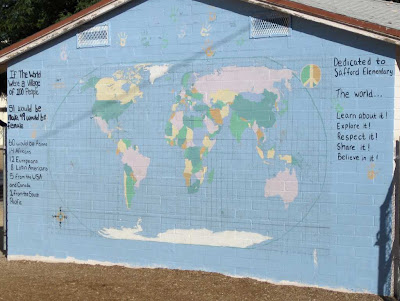 The mural’s left side has some interesting statistics about the world. (As always, you can click on the photo for a larger view.)

If you walk through the arch and past the benches in our previous post, you'll be at the entrance courtyard at the school. (The address is 1085 South 10th Avenue, but the school isn't directly on the street). There are murals all around the courtyard, but please restrain yourself :) long enough to sign in at the office first.

Next to the office is this big mosaic mural (the lighting — part sun, part shade — made it hard to get a good photo): 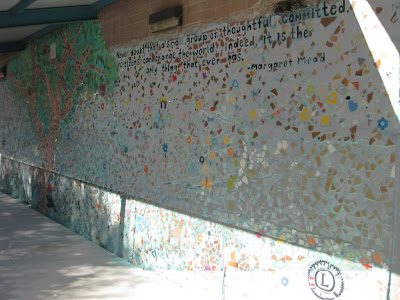 The quote, by Margaret Mead, says:


Never doubt that a small group of thoughtful, committed citizens can change the world. Indeed, it is the only thing that ever has.

Here's a closeup around the tree: 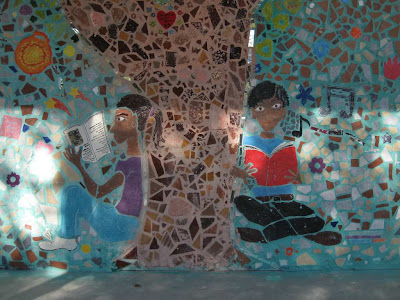 Look in the middle of the mural for this small tile: 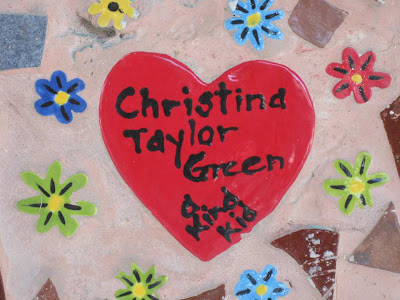 (Here's a link to the the Christina-Taylor Green Memorial Foundation website.)

To the right of that large mural is a smaller one near the library:

And, on the south wall of the courtyard, across from the office: 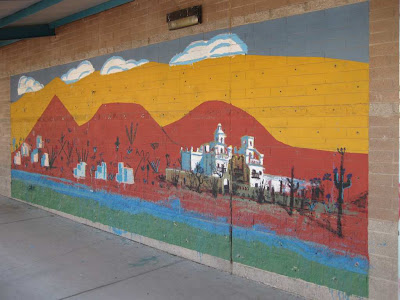 I took the photos on January 18th.
Posted by Jerry Peek at 12:01 AM No comments: 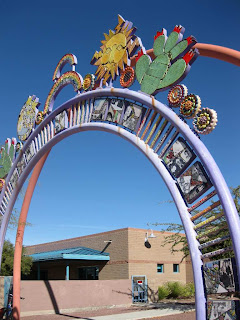 A few blocks northeast of the 22nd Street exit on I-10 is Santa Rosa Park. (Here's a map.) I rode in on January 18th and parked in the bicycle rack next to the library, just past this arch:
Between Santa Rosa library and the Drachman Montessori Magnet School, you'll find benches covered with mosaic murals: 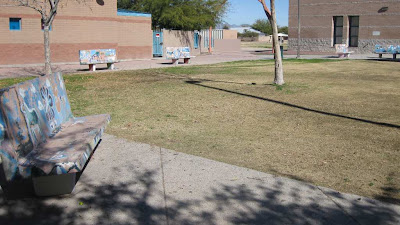 Here are a couple of close-ups: 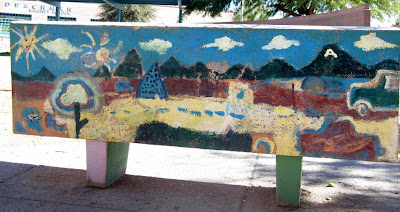 Our previous post showed a long-gone mural on South 6th Avenue. One of the photos came from a collection of Tucson mural photos taken sometime around March/April 2000 by Bangbay Siboliban and Bettina Shzu. Bangbay gave me the OK to re-post the photos here, along with links to more recent photos that we already had here. Thanks to both of them for sharing these Tucson murals from 12 years ago! Bangbay wrote “A church sports a mural-in-progress which shows destruction, paradise, and graffiti.” It was somewhere in South Tucson. 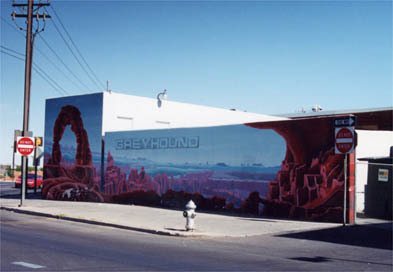 Back then, the station was at 2 South 4th Avenue in downtown Tucson.

Here are three photos of a mural on South 6th Avenue in Tucson. The first shows a long view; the others show details. It's “Illustrating the Aztec myth of the two lovers Iztaccihuatl and Popocatepetl, this mural exemplifies the strong influence of indigenous Mexica religion still present today.” 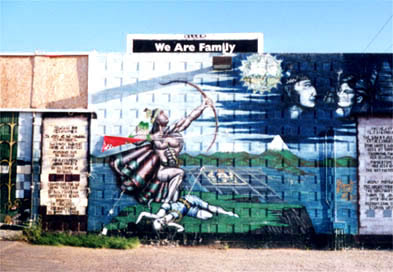 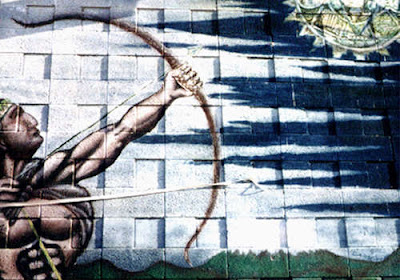 The bottom two photos are versions in Spanish and English. You can click on them for a larger view.

Memorial at a tattoo parlor 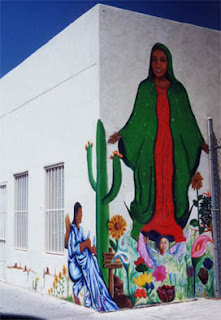 Bangbay wrote “This mural, on the corner of a tattoo parlor, commemorates the death of the small child under the Virgin Mary.”

The business here has changed, but the mural was the same — on our August 11, 2011 post In Memory of Crystal — though the color of the wall is different and there's now a “Parking in back” sign above the mural. It’s Rosy’s Beauty Salon, 4453 S. 6th. 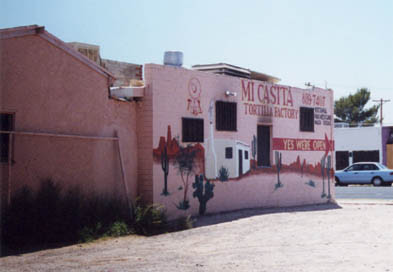 Fast-forward to January, 2011, the wall was yellow, but the two windows in the middle still had what looked like soot over them. Maybe what I thought was a fire inside the building was just everyday smoke coming out of those two windows? 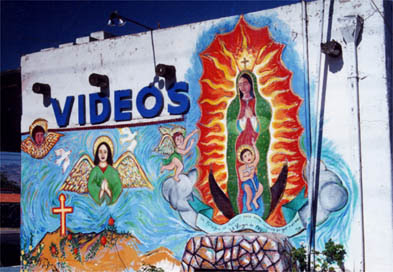 Seven years later — December, 2007 — Erik S. sent Randy photos of a building and a mural that look a lot like this one. Erik wrote, “The Virgin of Guadalupe is on a video store on the southeast corner of Grande and Congress.” At the end of 2010, Melodi King and I found the mural at Grande and Congress being repainted. 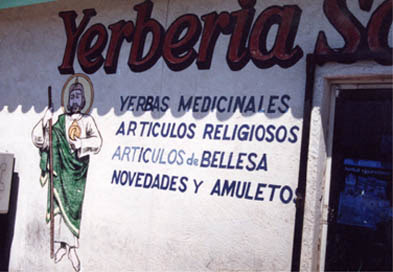 By December, 2010, the store here was named La Orquidea... it had been selling floral arrangements and handling special events... was available for rent... and still had a mural showing San Judas.

Thanks again, Bangbay and Bettina, for those photos! If you have info about or photos of these murals — or any other murals that used to be in Tucson — please leave a comment below or send me email.
Posted by Jerry Peek at 12:01 AM No comments:

Before it was a mural...

...it was another mural. Say what? Here's the story.

Right away I got an email from an intern at the Arizona Historical Society. She'd been studying old Tucson murals and thought she might have photos of an earlier mural on the same building. Here are the photos she sent me: 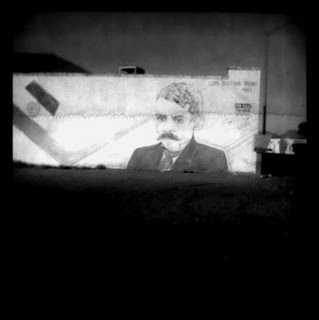 That was taken by Patricia Katchur in 2000. The second photo was on Bangbay Siboliban's website: 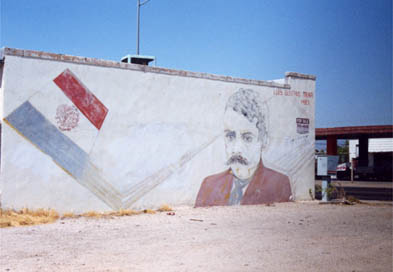 The building in all three photos has the same shape. And there's another clue. In the background of the last photo is part of a gas station at El Barrio Market across the street from this building. (The market has since closed.) I had another photo of the market, and the gas pumps look the same in that photo.

So, it looks as if, 12 years ago, the mural here was of Emiliano Zapata, painted by Luis Gustavo Mena. Sometime since then, another mural — the one peeking out around the edges of the solid paint — replaced the Zapata mural. And, after that, the mural was painted over to leave the mostly-blank wall. Or something like that!

If you know more, please write a comment below or send email.

A couple of blocks north of 22nd Street — South 10th Avenue & La Paz Street — west of our previous three posts — is the west entrance to the library and Santa Rosa Park. These three tiles are on the sidewalk in the middle of that intersection.

Below are closeups of each tile. I found them on January 18th. 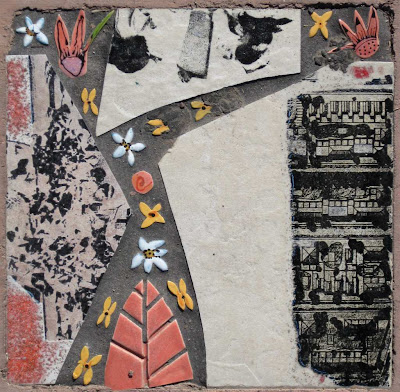 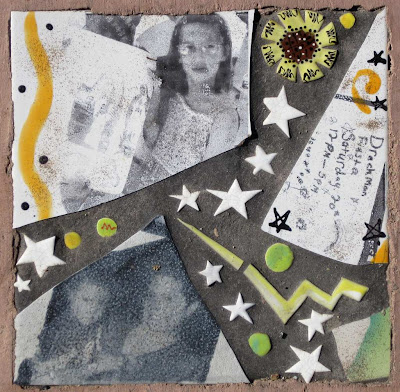 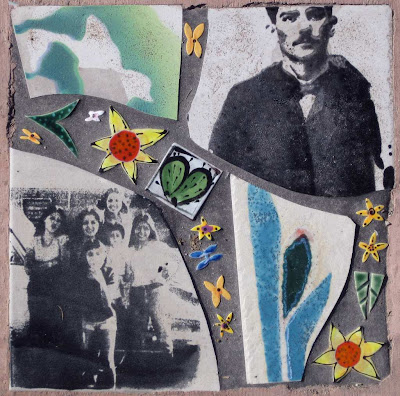 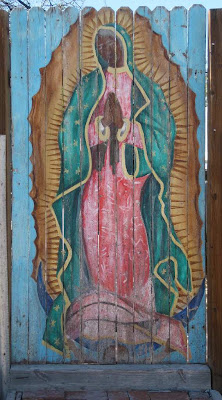 Lots of Tucson homes have painted designs that you might call a “mural.” There are so many that we won't show them all here! I thought this one was especially nice, though. I found it at 932 S. 7th Avenue on January 18th. 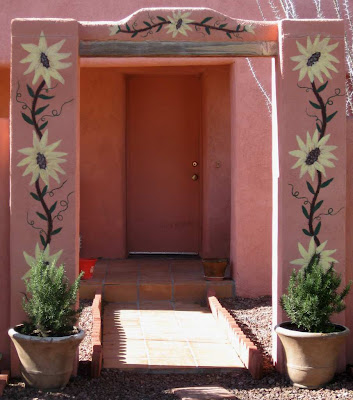 There are more murals in the block north and south of here (see the previous and the next entries on this blog), and it's near downtown. Stop by!
Posted by Jerry Peek at 12:01 AM No comments:

There are two beautiful murals here at 848 S. 7th Avenue. 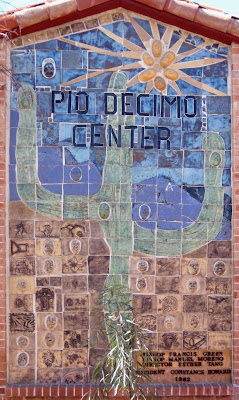 And, on the south wall, behind the playground: 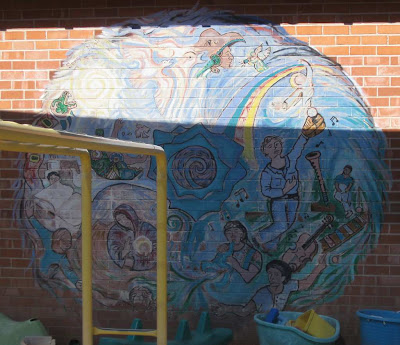 As Melodi King and I were discussing how to update the mural map just recently, I realized that this blog has been online for six years now — since July 12, 2006. 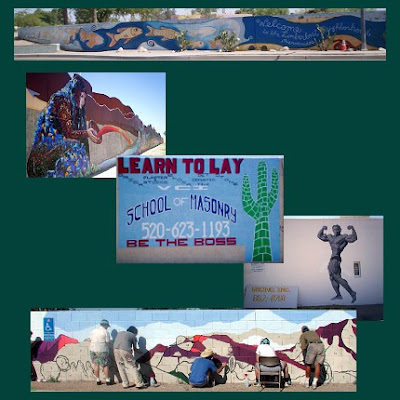 If you'd like to look back, click on the collage above or choose one of the years from the Blog Archive in the right-hand column.

Happy sixth to us! Thanks for reading.
Posted by Jerry Peek at 12:01 AM No comments:

This was the south side of the building at 1016 S. 6th Avenue (south of 20th Avenue) on January 18. There are bits of what looks like the original mural popping out from underneath the paint.

If you know what mural was here, please leave a comment below or send me email. If you have a photo, I'd be glad to post it! (Same goes for any former mural that we haven't shown on the blog. There's a list of mural locations in the table of murals.)

This (tagged) mural is on the southwest corner of 21st Street & 6th Avenue. You can see it on this photo of the KY Supermarket building by Dean Jeffrey.
Posted by Jerry Peek at 12:01 AM No comments:

Want to take a stroll after your Fourth of July cookout? One of the nicest short streets for murals is Calle de Jardin, just south of Broadway. You can see that street corner in our February 17, 2010 post.

Next south, at 125 S. Calle de Jardin, is a home with some painted plants and pots as well as some real ones: 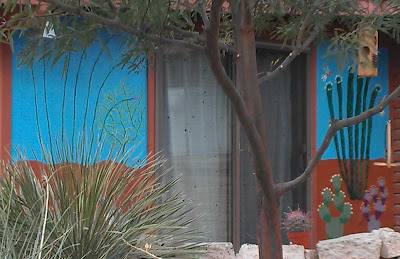 On the other side of the street, at 211 S. Calle de Jartin, is a nural on a wall next to the street:

And, at the corner of El Volador, a pleasant place to sit — in the middle of the intersection! 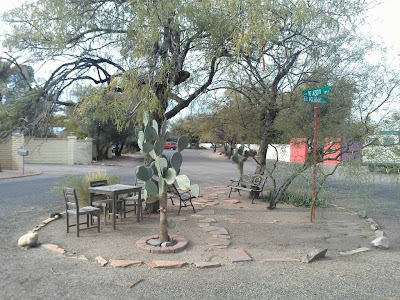 Here's a map centered at the corner with Cooper Street. 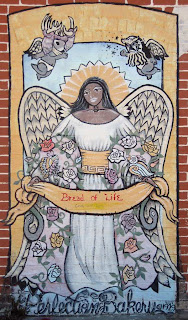