There was a dark shadow on the lower right corner.  I lightened it as best I could.

On November 15, Joe posted a photo on Facebook of himself and the mural in the background:

We posted another car mural of Joe's on December 27: Autos In Black And White.

Autos In Black And White

On October 28, Joe posted a photo to Facebook showing himself in front of the mural:

I'm in Mexico this week and David's computer is in the shop. So we're giving you (and us!) a break this week for some last-minute Christmas shopping. See you on the 27th!
Posted by Jerry Peek at 6:01 AM No comments:

This mural was found on the North (rear) wall of the Black Bear Diner.

The mural being posted today is either a newer mural or one that I overlooked in 2017.

Too soon for the birds and the bees?

Parents traditionally wait a while to discuss “the birds & bees” with their kids. I wonder whether Learning Tree Preschool & Daycare considered having a mural showing, say, bees and bugs? 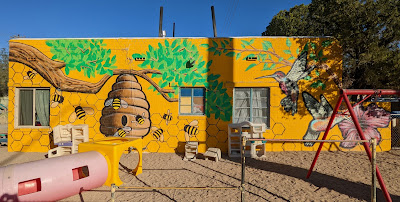 The mural is on the west side of the building, next to the westbound lanes of 22nd Street, so this mural would be in your rear-view mirror as you drive by. Maybe that's why I didn't notice the mural until recently? It was easier to spot their mural along 22nd, shown in our December 17, 2021 post. The two murals look similar, so maybe the west wall was also painted by Wagon Burner Arts.

Here's a closeup taken from the right (south) end, near 22nd: 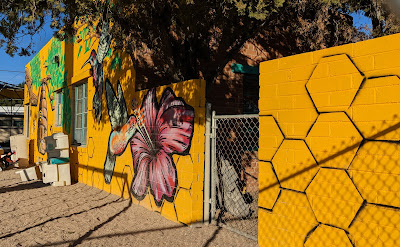 At the very south end of the wall are traces of the mural that used to be there. Here are photos from now and from March 6, 2011 (our post 22nd and the world and now: 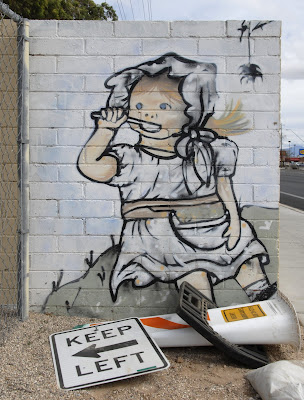 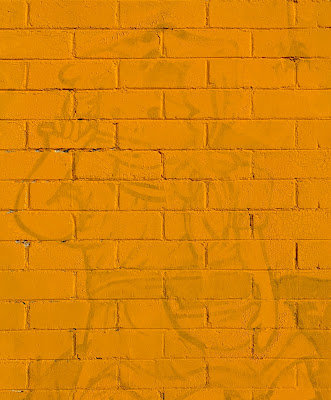 I buzzed by on November 23rd.
Posted by Jerry Peek at 6:01 AM No comments:

If you've driven along Congress Street into downtown from the east, you've seen two murals on the east side of the Rialto Theatre. (That was especially true years ago before there was a building blocking the view.) Joe Pagac used to paint most of them.

Now Jessica Gonzales paints here. BG Boyd Photography sent a photo from his drone of Jessica and her husband painting on November 16th: 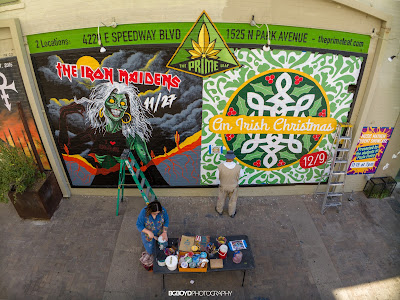 To give you an idea of the murals that Jessica is creating, I picked a few from her Instagram page @jessicagonzalesart.


…a break due to the pandemic…


The man and monkey in the photo above came from Joe Pagac, who painted the murals before Jessica. Here's a post with examples — from July 16, 2019 — A history of Joe Pagac's little man on the Rialto.
Posted by Jerry Peek at 6:01 AM No comments:

For some reason, this mural on Roadhouse Cinemas hasn't been on the blog since Joe painted it in 2017. I mentioned a newspaper story about it, A movie crew chases outlaws chasing a train, but then forgot to go see it until September 20, 2022: 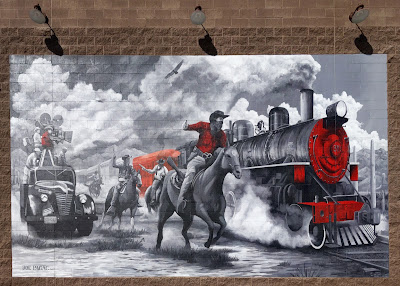 It's high on the wall, so I used the digital zoom on my phone camera. It doesn't have the quality of a real (optical) zoom, but the photos look okay shrunken for the Web: 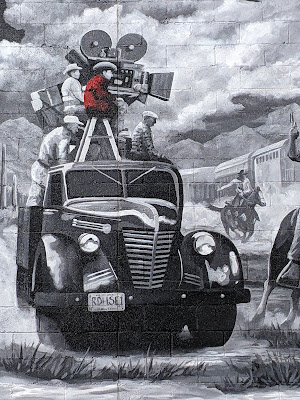 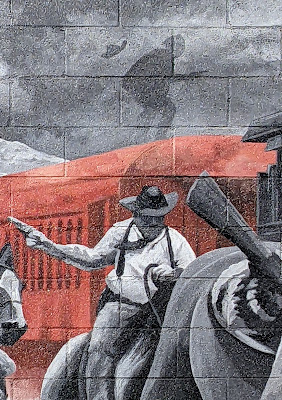 Thanks to BG Boyd Photography for this aerial photo taken February 23, 2022: 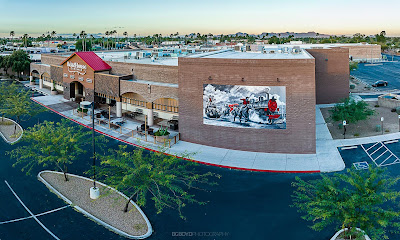 (It's a wide panorama, so the straight line of the building front looks curved.)
Posted by Jerry Peek at 6:01 AM 1 comment:

"I am Tucson" mural in its first home (Murals being made, part 73) 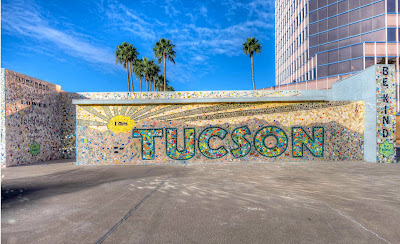 …in its new location at the Tucson Convention Center. The photo above was taken in the mural's original location, northwest of the corner of Broadway & Stone — likely on January 25, 2014. Thanks to Ben's Bells for that photo.

Before and after original mural was made

Courtesy of Google Street View, we can rewind to March 2011, from the northeast (Stone south of Congress), before the mural was started:

Below is the same view in July 2013. Although the color is washed out, you can see the mural on the sunlit side of the structure:

That structure (a ventilation tower for the parking garage underneath, I believe) had Ben's Bells murals on three sides. Below is a view from the southeast (Broadway at Stone) in May 2015:

This blog has photos of the other two Ben's Bells murals on the structure in Murals being made, part 8 (Kindness, part 3) and Ride on, Tucson.

Original mural being made

Now on to 2012, when the “I am Tucson” mural was being made. Thanks much to Monique from Ben's Bells for collecting and sending the historical photos below. The dates came from data hidden in the photo (which can be wrong if the camera's clock wasn't set correctly).

On August 22, 2012, the mural had been outlined onto the refinished side of the structure: 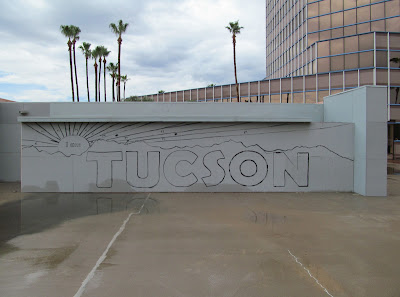 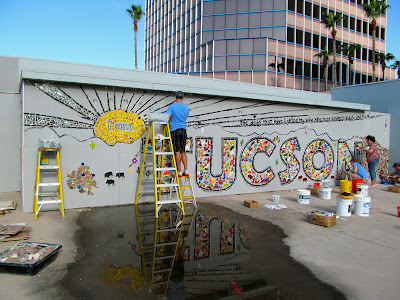 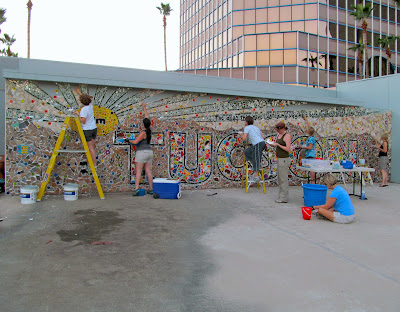 … but there was more to do, like the rays of sun near the top left: 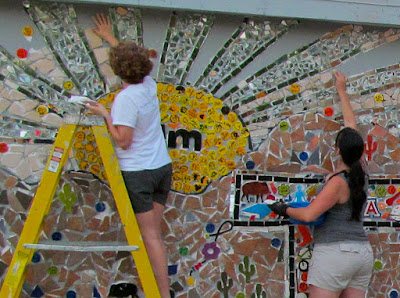 Goodbye to the original mural

I dialed Google Street View back to June 2018. It shows the plaza with the murals. Street View also showed that, in April 2019, the new building which would replace the plaza was taking shape. The photo below shows the scene sometime between those two dates. It's looking south from near Congress toward Broadway; Stone is at the left edge. I've outlined the structure, with at least one of the murals still on it: 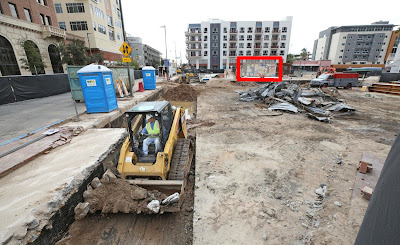 In its new home

As we showed last week in the post I AM a re-born TUCSON mural, this is the mural in its new home at Tucson Convention Center: 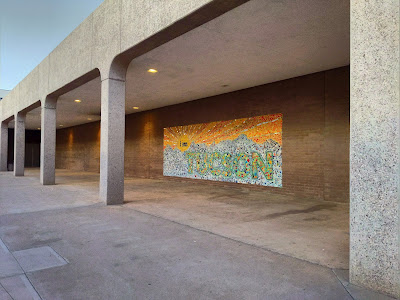