The 20-year-young community mural along Stone Avenue, between Roger Road and Limberlost Drive, was repainted this month — just in time for New Year 2022. 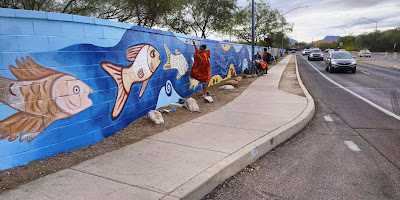 It was the first mural covered on this blog — Looonnnggg on Limberlost, posted July 12, 2006.

The repainting got a lot of attention in the press from Tucsonans, and especially the neighborhood around this 200-yard-long mural. A number of the articles who first painted it 20 years ago came back: Pasqualina Azzarello, Adam Cooper-Terán, Matt Cotten, Paloma Jacqueline, yu yu shiratori, Serena Tang, and Gavin Troy. Pasqualina was the lead artist; she flew in from Massachusetts. The Arizona Daily Star section #ThisIsTucson tells some of the story in their December 21 article This Tucson mural was restored by its original artists 20 years after its creation. Pasqualina tells the story of the mural and more in a 34-minute-long podcast on KXCI community radio on December 22: Pasqualina Azzarello – Painter, Public Artist, Educator, and Community Advocate.

Painting wrapped up on Thursday, December 23. Donations from Tucsonans, and especially from the neighborhood around the mural, paid for high-quality paint that should last even longer than the amazing 20-year life of the previous paint. (West-facing murals tend to fade quickly in Tucson's strong summer sun.) The first plan was to recognize major donors with personalized stars on the mural; now donors will be thanked on placards that will be attached to the mural in the coming weeks.

Ten years after this blog started, we posted photos of the entire mural, from north to south, in Ten years of Tucson murals. (That post also includes a video of the whole thing.) The mural is painted on 16 sections of the long wall. Below are our 2016 photos followed by photos of the same sections — from the north end to the south — taken on Christmas, December 25. Our next post — January 4, 2022 — will show highlights of the mural before and after repainting. Parts of the mural have been simplified… I'm guessing that makes sense because there's no way just a few artists could re-paint every detail of the mural in two weeks!

As I mentioned, our next post — January 4, 2022 — will show before-and-after closeups of parts of the mural. The section numbers above each group of photos will be used to locate each close-up. See you then, and Happy 2022!
Posted by Jerry Peek at 6:01 AM No comments:

Monsoon in a Bottle

If you're driving along West Ft. Lowell Rd. you can't miss this very large mural on the north side of the street.  I took these photos on Nov. 23, 2021.

Click on any photo for a slideshow of larger images.

It's Christmas Eve. Maybe you need to rush out for some last-minute shopping? One character can't get enough of the La Encantada shopping center… she's there every time you stop by: 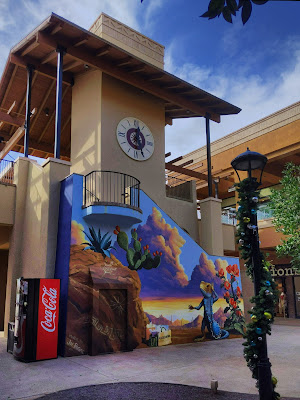 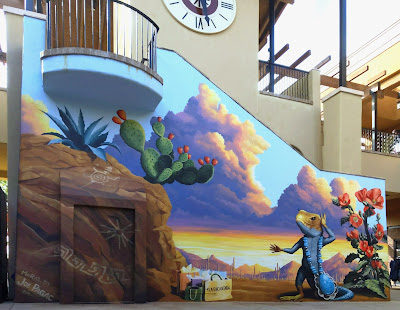 It's another of Joe Pagac's critter murals — this time with a huge turquoise necklace and a bunch of shopping bags.

Here are some close-ups: 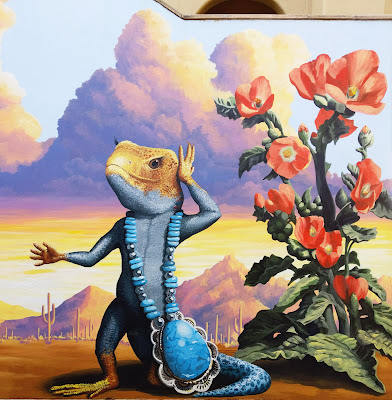 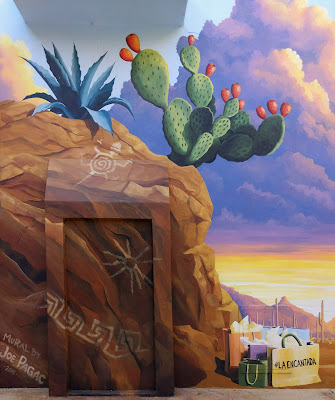 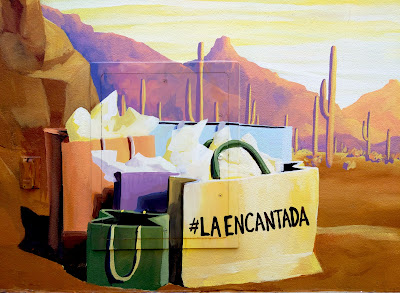 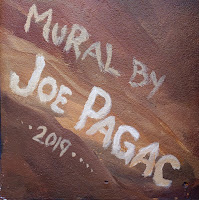 I shopped until I dropped on November 20th.
Posted by Jerry Peek at 6:01 AM No comments:

I chose 'Untitled' over 'Large Round Object'.  Without knowing the intent of the artists I can only guess whether it's a sunrise or sunset or even a partial eclipse.

This past Monday, I posted an announcement about the 200-yard-long Stone Curves mural being repainted. The dedication is today (Saturday 12/18/21) from 2 to 4 pm. Here are photos of the artists busily painting on Tuesday: 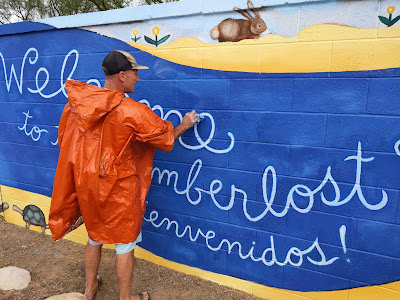 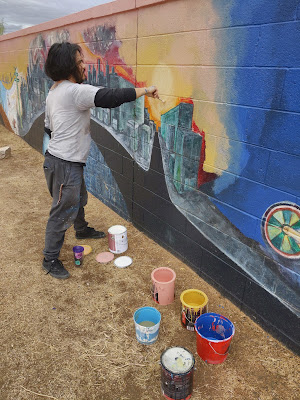 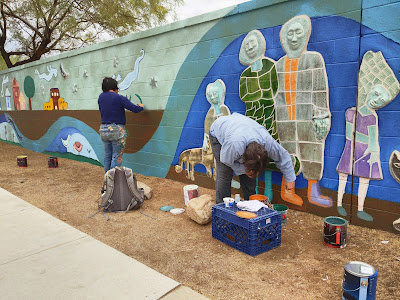 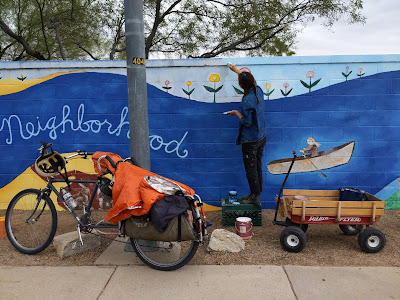 At least some of the artists will continue painting in the next few days. You can contribute, and show your love for the mural too, on their GoFundMe page North Stone Avenue Mural Revitalization Project.

I hope to see you this afternoon!

Update (December 19, 2021): Quite a few people turned out yesterday to see the mural. Police blocked off the lane of Stone closest to the mural to give more space. Here are two photos: 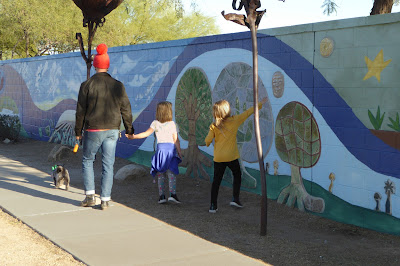 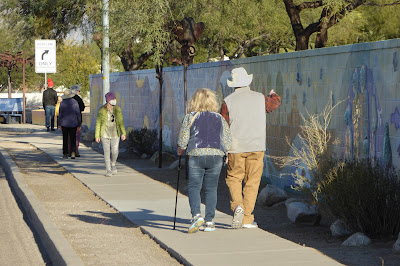 Some parts aren't finished yet. Artists will be working from time to time this week.
Posted by Jerry Peek at 6:01 AM No comments: