This blog started on July 12, 2006. This is the 1300th entry since then… most are murals,but some are news and announcements. We have plenty more murals waiting to go online… please stay tuned!

Long-time Tucson artist Luis Mena has been here much longer than the blog! He's still painting murals — as well as sculpting and other work, he told me recently. One of his latest projects was restoring his mural on the back wall of the Roskruge Elementary and Bilingual Middle School auditorium stage. It's one of at least two murals he's painted in the school over the years. You can see them by clicking through the list below.

The top mural in the first page below is the auditorium stage mural during October, 2016, as restoration started. See the blank white band running down from the woman's dress? If I remember correctly: Some kind of internet equipment was hung there; it was moved to a side of the stage. There was more to do, too.

Below are the five blog entries showing murals at Roskruge before he started repainting. (Most of the artists were painted by other artists.) You can come back here by clicking your browser's “Back” (or <—) button.


Note that murals are not open to the public without permission. Check in at the office: Come in the north entrance, then turn left at the top of the double stairway inside.
After Mena told me that he'd be repairing the mural, I stopped by on June 21st, 2017. He suggested I stand on a ladder for a better view over the raised auditorium stage. Here's my first photo: 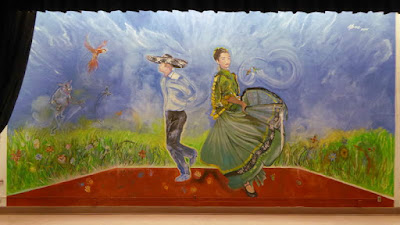 I'm not sure if he'd done much work by this point; the mural looked pretty much the same as in David's photo posted on January 9th.

Mena showed me some of his plans. Here's the stripe that I mentioned: 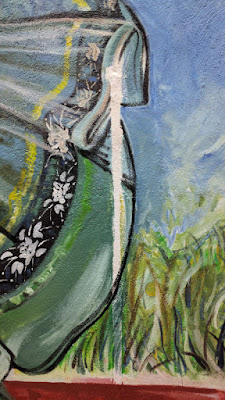 Next, two closeups of the bottom left. Roskruge's school mascot is a puma, and there's one in the first photo below… though I'd guess it's not always shown with its skeleton inside: 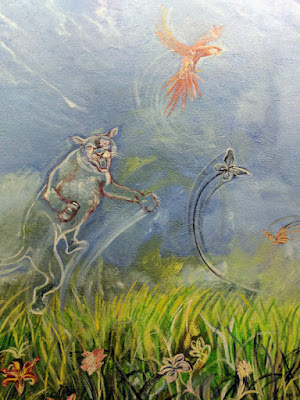 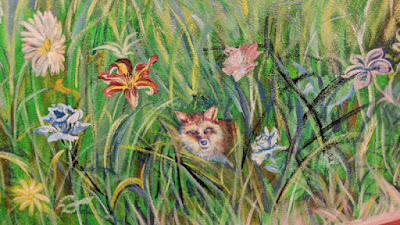 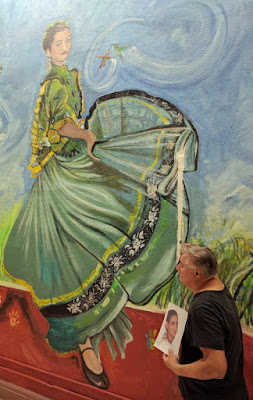 The woman dancing is Mena's daughter. Here he's working from a photograph of her. 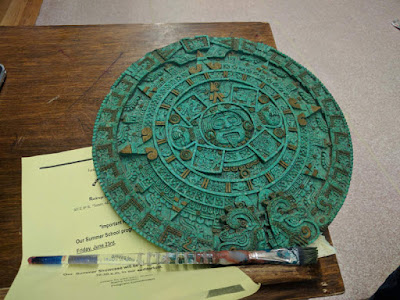 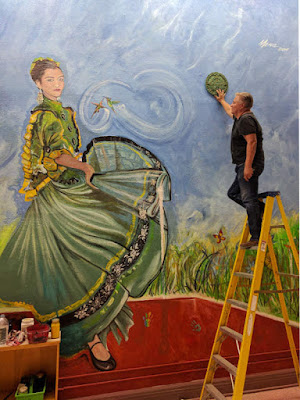 Above, on a podium, is the Mayan plaque he'll add to the mural. To the left, he's holding the plaque in the place it'll go.

I came back on August 10th, when (I think) he was basically finished. First, here's the photo David Aber took; then, a photo I took in August: 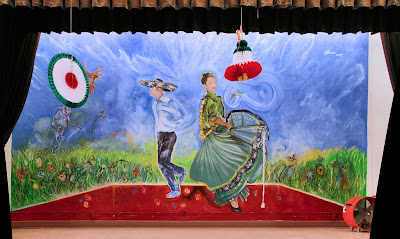 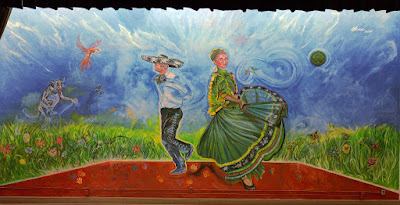 (If you'd like to compare larger versions of the photos: Click on one of them, then click on the thumbnails at the bottom of the slideshow window that opens.)

You can see that he's fixed the white stripe next to his daughter. The plaque is near the top right corner. There are probably some smaller changes that I didn't notice. (And the two hanging decorations in front of the mural have been taken down sometime since October of last year.)
Posted by Jerry Peek at 6:01 AM No comments:

Miss Muffet, better known as Mary Lucking, in collaboration with Dwayne Arnspiger made cast-concrete tuffets that form the bases for eight different ceramic tile mosaics.  They placed them along the Arroyo Chico Greenway in 2013 where I found them on Aug. 10, 2017.  I posted four on Sept. 15.  Here are the rest: 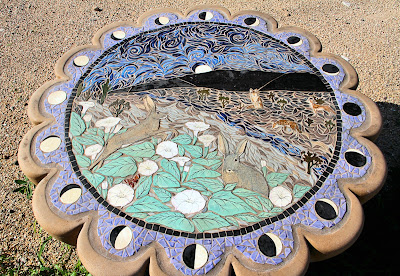 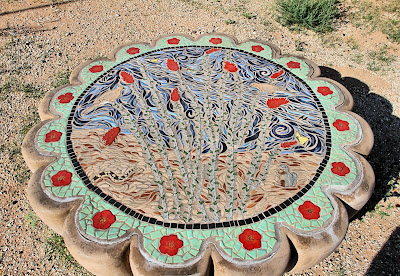 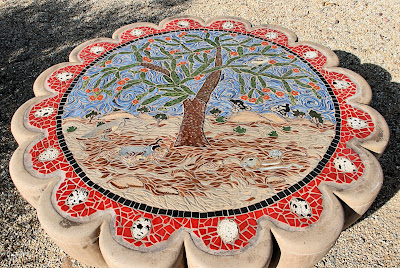 Click on any photo for a slide show of larger and sharper images.
Posted by David Aber at 6:01 AM No comments:

Miss Muffet, better known as Mary Lucking, in collaboration with Dwayne Arnspiger made cast-concrete tuffets that form the bases for eight different ceramic tile mosaics.  They placed them along the Arroyo Chico Greenway in 2013 where I found them on Aug. 10, 2017.  Here are four for now.  I will post the rest in a week or so. 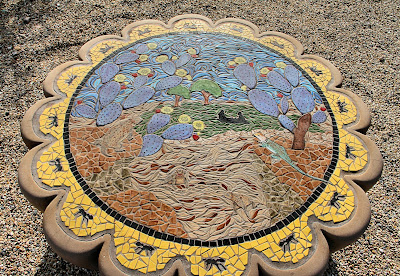 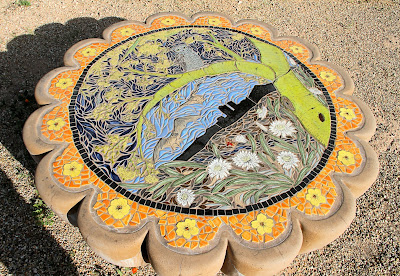 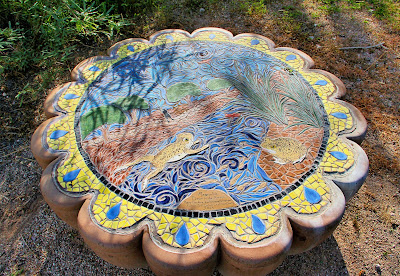 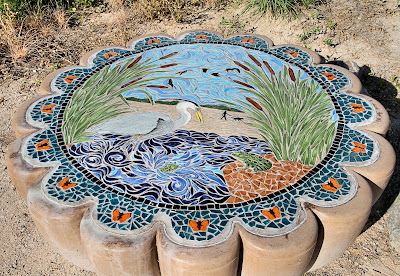 Click on any photo above for a slide show of larger and sharper images.

I had to take two of the photos from a side angle to keep my shadow off the mosaic.
Posted by David Aber at 6:01 AM No comments:

Dots and dashes outside TMA

When I spotted this wall on October 26, 2016, it was a fairly new design. (I don't have many photos of the different designs here over the years. Some from November 26, 2015 are in Banda Calaca murals. Others from August 9, 2010 are in Murals at the moment.) The wall is located between the Education Building and the main entrance: 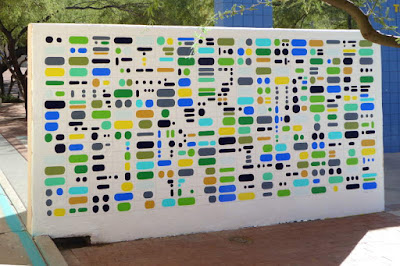 Here are two murals (you can call them posters if you like) that I found outside the entrance to the Crossroads Restaurant on June 26, 2017.  The artist is Miguel but I wasn't able to find any further info.  You are supposed to place your face in the opening while someone takes your picture.
Click on either photo for larger and sharper images.

The Restaurant also appeared in the Tucson Murals Project on Oct. 31, 2012. Cross Roads restaurant.
Posted by David Aber at 6:01 AM No comments: