South wall of Marymar Raspados as seen from West Oklahoma St.  This mural replaces one previously posted to this blog on May 8, 2010.  See Superheroes and a rose 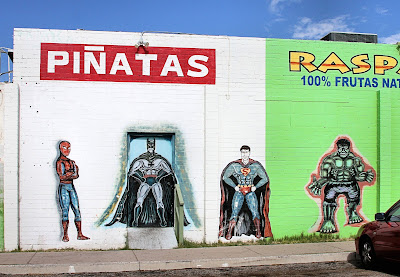 On June 2, 2016, the Tucson Foodie rated Marymar as one of the 19 best raspados spots in Tucson.  A Raspado is a Mexican-style shaved-ice drink topped with fruit, flavoring, syrup, and various condiments.

Update (March 18, 2022): This mural has been updated and there's a mural on the front too. See today's post Raspados Marymar Revisited.
Posted by David Aber at 6:01 AM No comments:

A mural can show just about anything… for instance, the side of a building can have a person's face. But it can also play on its surroundings — like this cheerleader with pom-poms made from clumps of grass growing in a pavement crack:

Art around the bunkers by Cece - in France pic.twitter.com/ARU1zFMTaT

would love to see some of this sidewalk art in person pic.twitter.com/umF8hxyc46

penguins on the wall pic.twitter.com/fklnIyCYhj

Herbal medicine store on S. 12th Ave. Palms and tarot cards are also read here.
The mural shows the Archangel Michael defeating Satan in battle.
On the right of the photo, note the symbolism of the cupped hands holding several people seated at a table.  Note the all-seeing eye of God, which also appears on the back of your one dollar bills. 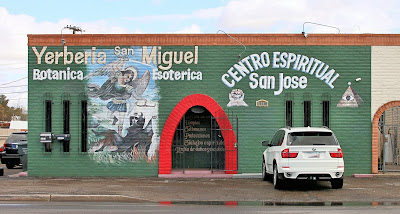 From time to time, the Arizona Daily Star runs an article with photos of murals. They ran another this week:

A look at some of Tucson's many beautiful murals

A lot of the murals are on this blog, but some aren't. (I don't need to tell you that Tucson has a lot of murals!)

Posted by Jerry Peek at 3:29 PM No comments: 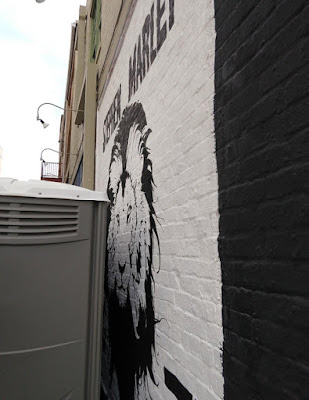 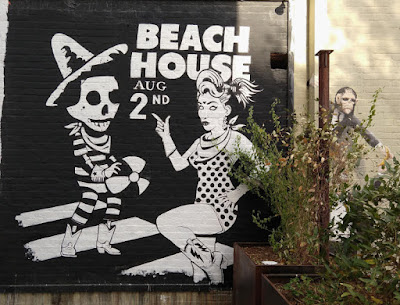 OK, to be fair: I was downtown first thing on a Saturday morning (July 27, 2018). Maybe the planter was in front of the mural to accommodate a crowd the night before. But (what looked like) an air conditioner? Grumble, grumble. (Maybe I'd been out too late the night before. :) And, when I stopped by last week, things looked back to normal.

August 22, 2018, I stopped by to see if the long mosaic mural at Oury Park has been repaired. There wasn't much sign of that: just the owww of missing tiles. (The swimming pool re-opened this year after being closed by budget cuts. KOLD 13 has the story: Pool at Oury Park to reopen after nine years.)

The mural was still pretty spectacular unless you stood up close. Here are earlier blog entries showing it in better shape:
I'll include a description of the photos, left to right. I took it from the Waymarking page The Oury Park mural - Tucson, AZ. Since it's called the Artist Statement and the Description, I'll hope that copying it here isn't a problem. The artists' website isn't working.) Let's start with a photo of the mural from across the playing field in front of it.

(As always, you can click for a larger view — in this case, a much larger view: It's a big mural! Also as always, if you want a full-size copy of any individual photos below, write me through the Contact Us form at the right edge. The photos are all in the public domain, though we appreciate credit.)

I'll try to include each part of the description underneath the photo it describes. They won't always fit neatly, so you may have to do some scrolling. Here goes:

Artist Statement: The murals are a reflection on the vital elements that helped shape Barrio Anita's past and future. The murals pay homage to the family members, leaders, and artists who nurture the people of Anita. These figures are intertwined with presentations of the water that once flowed through the neighborhood and which brought together a diverse population.

Description: The Barrio Anita Mural Project combines photography, mosaic and painted murals, metal features, and words into a comprehensive community art project expressing the past, present, and future of Barrio Anita, one of Tucson’s oldest neighborhoods with a population reflecting Tucson’s heritage including Native-American, Mexican-American, Chinese-American, African-American and Anglo-American residents.

The mural measures 14’ x 390’ and viewing from the left side moving to the right the mural shows the following: 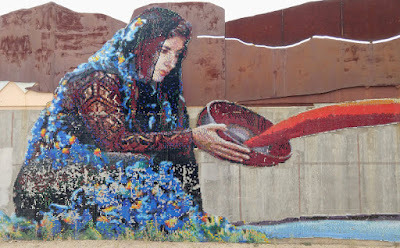 The Woman of the River has lifeblood and energy running out of her vessel, themes and colors that continue through the rest of the piece. She is covered in flowers, and she feeds spiritual energy to the community. Discussions during early meetings with the Anita community inspired this figure from tales told of the neighborhood. The artists wanted to take these stories and imbed them in the history of the neighborhood. The water and blood that flow through the piece are the synergy that weaves the entire piece together, giving it symmetry. The model for this particular figure was the granddaughter of one of the Orie Tigers baseball league. 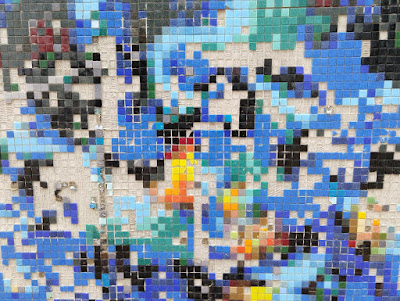 (Above is a closeup of the clothing of the Woman of the River.) 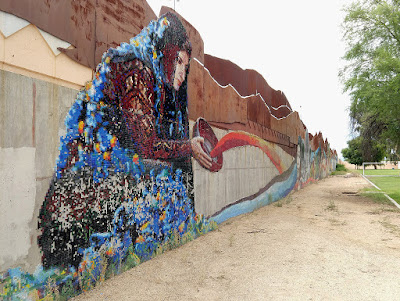 Rio Santa Cruz. This river was once a part of the neighborhood prior to the construction of Interstate 10. Water played an important role in the daily lives of the people of this community. There was once an irrigation ditch that ran through and under some of the homes here, and people from the neighborhood used to swim in it to cool off. 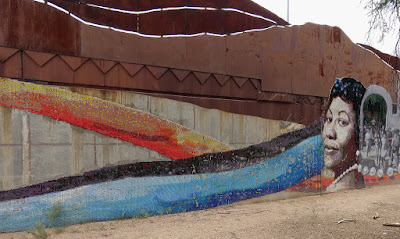 Dr. Laura Banks. Banks grew up in the neighborhood during the mid 20th century. At the time there was a greater African American population in Anita. She had to drop out of high school at one point but managed to go back and finish and she then continued on to the University of Arizona. She received a degree in education and then worked at Davis School. In 1980, she was selected as the first African American Assistant Superintendent in TUSD and retired from that position in 1982. Dr. Banks was also a prominent civil-rights leader in Tucson. Today there is a Tucson middle school named after her. 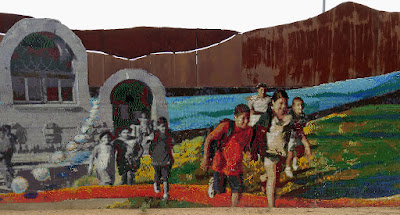 Davis School. This image These images show shows the students of the past and present running in front of the historic building. 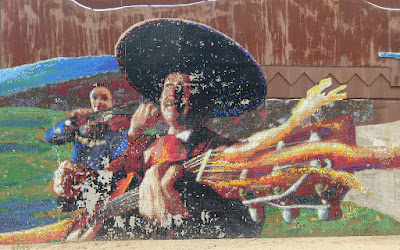 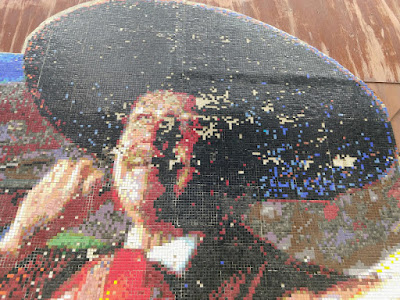 Mr. Alfredo Valenzuela. “Mr. V” taught mariachi band courses at Davis School for over 25 years and still continues despite his retirement. He has inspired hundreds of student and professional musicians. His students carried the mariachi tradition throughout the community, and this is visually represented with the lifeblood pouring through his guitar, where it gains energy and continues through the mural. 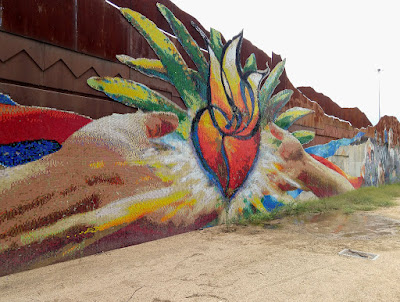 The Heart and Hands. This central image in the mural is the visual representation of the community. The hands are supporting a glass heart, again adding to the overall symmetry of the piece. The blood and water that run through the piece converge on the heart, the community, as an essential part of the circulation of Barrio Anita.

Oury Park (now David Herrera & Ramon Quiroz Park). This image features the Rosas, the neighborhood’s women’s softball team, on the left, and the Tigers, the men’s baseball league, with David Herrera as the central figure. Herrera served as director of the Recreation Center in Barrio Anita and played an essential role in getting the neighborhood involved in sports and community outreach. Alisa Cortez sits on his shoulder, representing the current rec center students.

Frank Soto and his mother. The mural closes with this pair. The Sotos’ Apache heritage reminds the viewer that this area was once Apache land. Soto’s mother holds the same vessel seen in the beginning of the mural with the lifeblood and spirit of the neighborhood flowing into it. This representation not only seals the symmetry of the mural, it also serves as a reminder of her role as a medicine woman in the barrio.

Auto Body Shop on North Stone Ave. Painted in 2018 and photographed on Jan. 30, 2019. The muralist was Clint Tzu of Old Pueblo Signs. 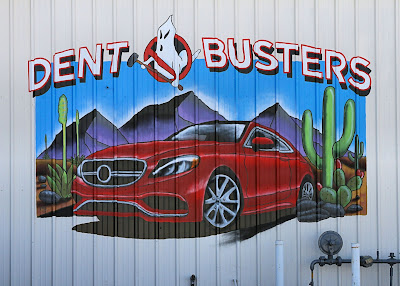