Sue's Fish & Chips is a South Tucson tradition. What better to show on Thanksgiving Day than food murals? 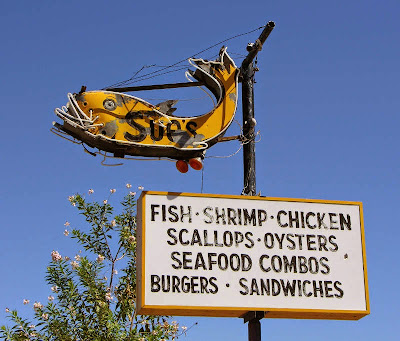 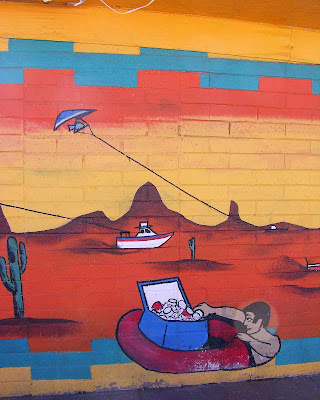 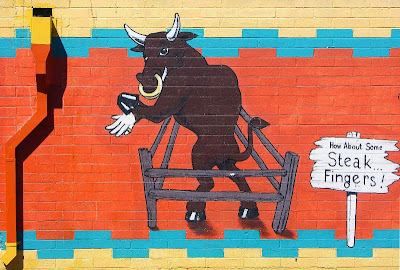 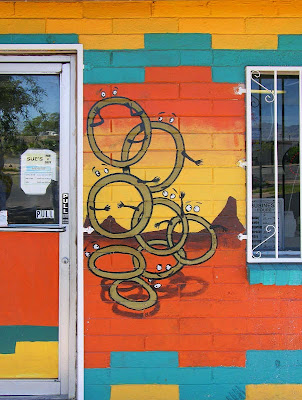 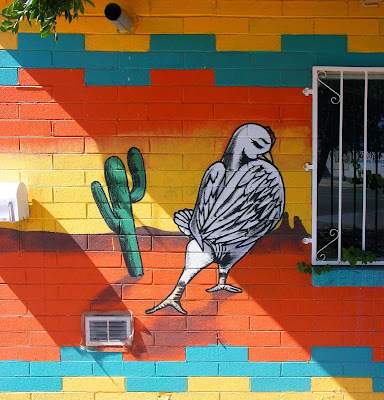 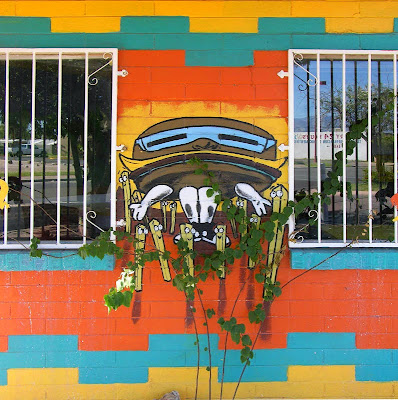 There are photos of an earlier mural version in our February 2, 2010 entry.

Speaking of Thanksgiving, thanks to Mark Fleming for these photos. He sent them in September.

Update from 2017: There's also a mural behind the store.

I try to keep up with all that the Tucson Arts Brigade does to bring people together and make great art. (If you haven't heard of TAB, check out their website, blog, Facebook page, and Twitter feed.) Last week I read their blog post about the new Safe Park Dream Center murals at Central City Assembly:

Right To Dream Center Murals: Moving towards the Sun

Thanks to TAB and all the people who volunteer with them to make Tucson a more beautiful place (in many ways!).

A vase of flowers and a cat... 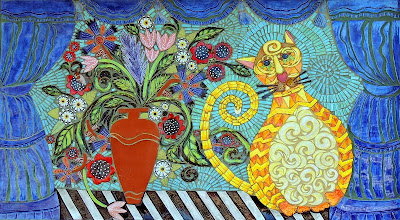 A year ago at the (former) IST

A while back, we published a couple of photos of the International School of Tucson at tne end of 2010. Last year, I rolled by on 1st Avenue and noticed a bunch of multicolored walls — but no school. It turns out the school had moved to 1701 East Seneca. (Here's the IST website.) I snapped a few photos, anyway.

This is the old convenience-store front at 711 Lester St. You can see the 2011 mural in the background: 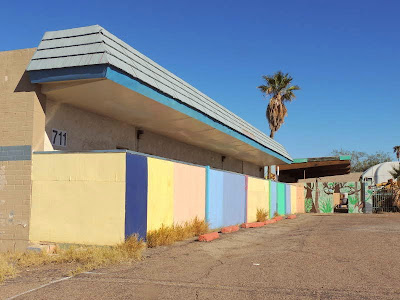 We don't have many murals from the far east side of town — partly because I almost never go that way on my bicycle. Thanks to David Aber, though, here's a mural on the side of Tucson Pool & Spa:

He wrote: “The mural is old and faded. I had to enhance the photo to bring out as many details as possible.” And there are lots of details! An army of critters, from a spider and a scorpion on up, are looking on jealously — or climbing in! — to join the cowboy in the tank (or is it a spa?): 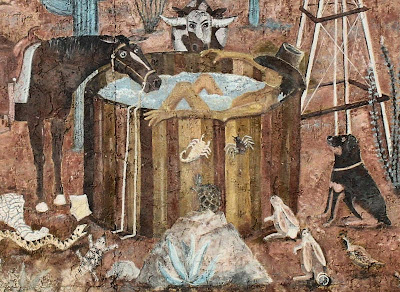 Update (March 26, 2021): I found an aerial view from BG Boyd Photography, who sent me a larger version: 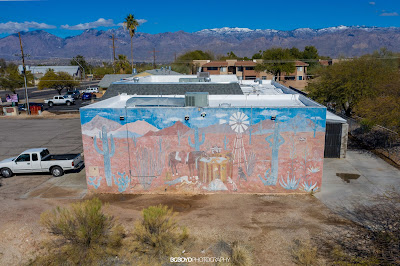 After World War II, the article says, Tucson grew. New artists and craftspeople needed a place. The area around one-block Ash Alley came to include studios and an outdoor gallery. It even had its own newspaper, the Ash Alley Bugle. Two of the first newcomers to Ash Alley — and the last to leave, in 1977 — were Jack and Sally Petty. Outside Petty's Studio Gallery was a mural that included three smiling frogs.

On December 29, 2008, Randy posted a photo of the mural — but only a rough location. Five years later — January 21, 2014 — I posted another photo with the exact location. Along with this week's email about the Zócalo article, Mark sent along five photos of his own. The date stored along with the images says that he took them on November 9th.

First, the whole mural (what's left of it). Then, close-ups from left to right: 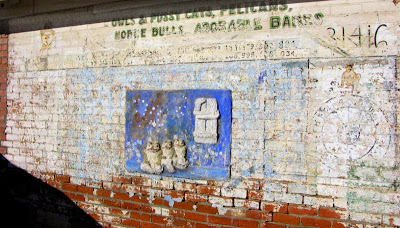 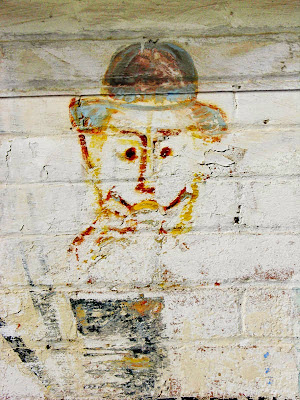 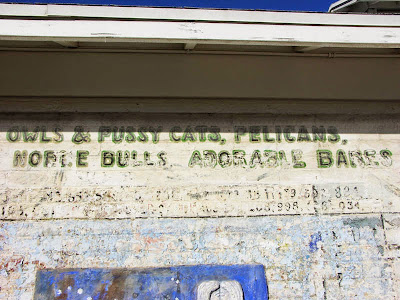 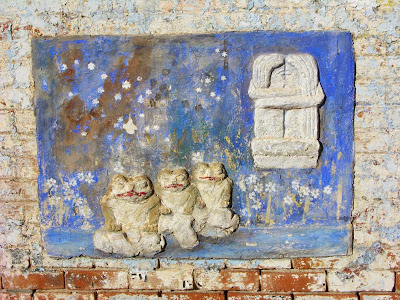 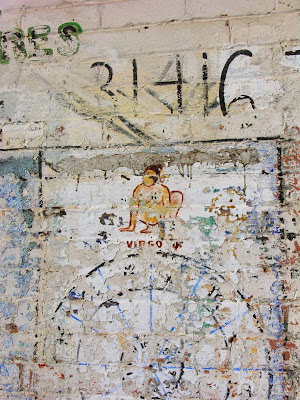 (I edited the second photo to lighten the shadow at top and darken the rest.) Many thanks, Mark!

Last time, we saw Mark Fleming's photos of a great mural by the parking lot at CostLess Auto Parts. But that's not all! He spotted a mural on a wall in the alley just south of the store:

I'm guessing that Mark couldn't step back far enough to catch all of the mural at once. Here are the left and right sides: 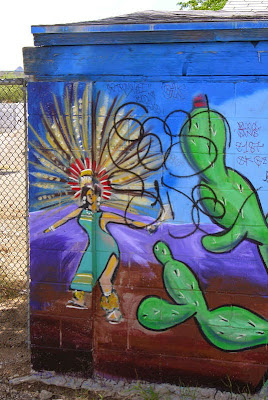 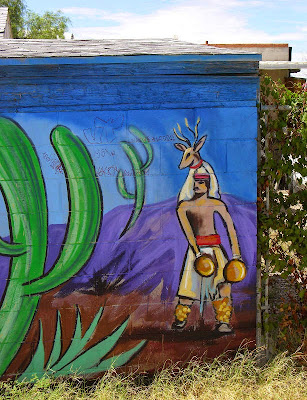 Both sides have been tagged. :-(

A couple of months ago, Mark Fleming (thanks, Mark!) sent photos of a wall at CostLess Auto Parts. It has a new mural. (Here's the old one in 2010.) First, his overall view: 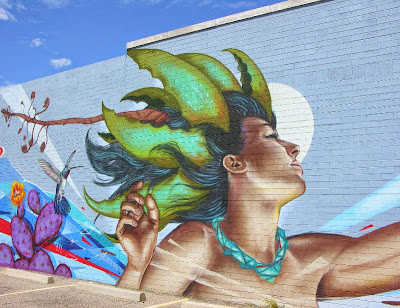 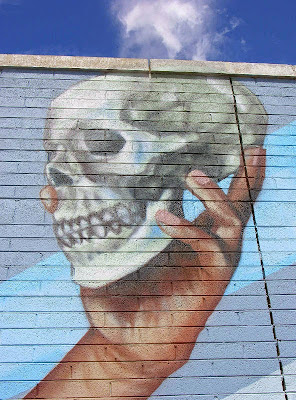 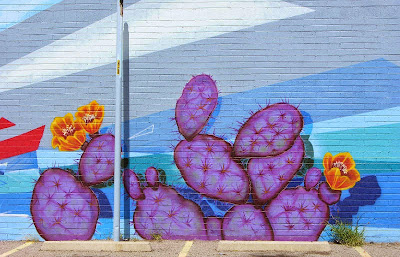 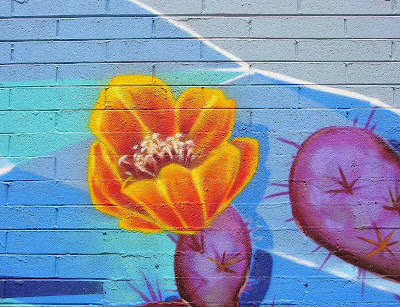 But there's more! We'll show it next time.

Lots of murals on the Tucson Daily Photo blog!

Last week I came across another blog with Tucson mural photos — lots of them. It's Tucson Daily Photo ~ (with a tilde character on the end).

Not all of the photos are murals. To see only murals, search for the Mural label (you can click there). After you've scrolled through a page of photos, you can see more by clicking “Older posts” at the bottom of that page.


The Tucson Daily Photo blog started on 06 June 2009. Thanks to the author, Website Editor: Wordsmith!

Since we posted the March 26, 2013 photos of the BICAS building (Bicycle Inter-Community Art and Salvage; their website is bicas.org)
I stopped by again on September 6, 2013. Here's a new mural I found on a piece of wood next to the entrance: 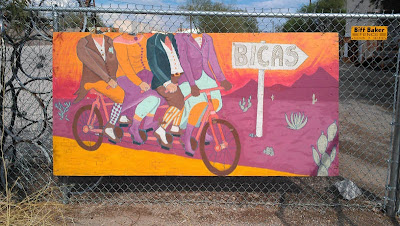 To see more fun art, stop by this coming weekend — November 8-9, 2014 — when BICAS will be part of the annual fall Open Studio Tour.