On March 10, 2017, I posted a beach mural on the south wall of Hotline 4 Auto. This year, as I've driven by the building, I've seen a new mural that seems half-finished. As of mid-August, it still wasn't finished. So I decided to schedule this post. If I notice that the mural has changed, I'll update this.

Is the empty rectangular spot at the top left corner for a business sign? 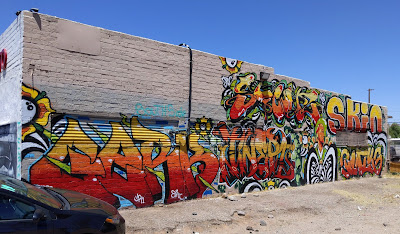 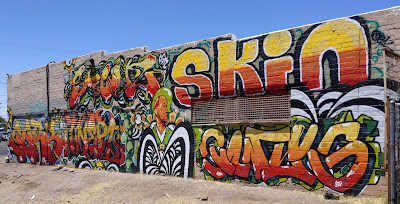 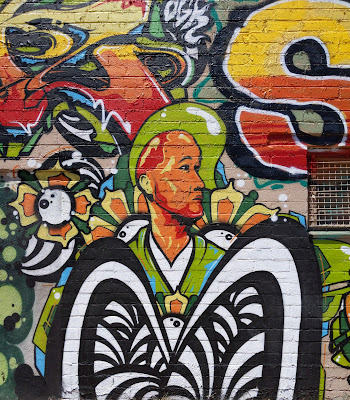 Murals being made, part 71: At the hockey rink

From what I've read, having a hockey rink in the middle of a city is unusual. Tucson does, though: the William J. Dawson Memorial DEK Rink at Doolen Middle School, just east of the Boys & Girls Club of Tucson - Frank & Edith Morton Clubhouse. On a storage container in front of the rink are two murals. BG Boyd Photography sent these aerial photos: 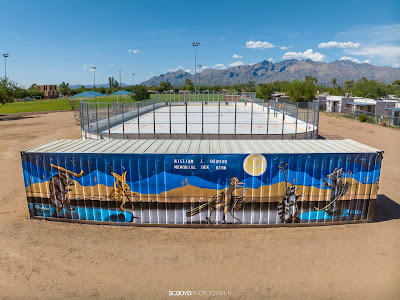 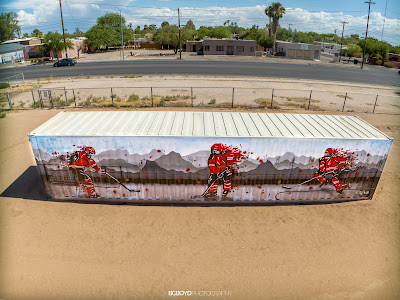 He took those from his drone on July 10, 2022. In the second photo, Grant Road is the street behind.

On June 22, 2022, I caught Alejandra working on the murals. Here she's painting the north side, the one closer to the rink: 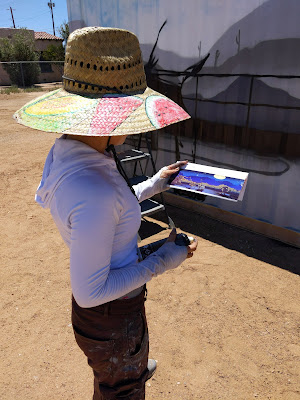 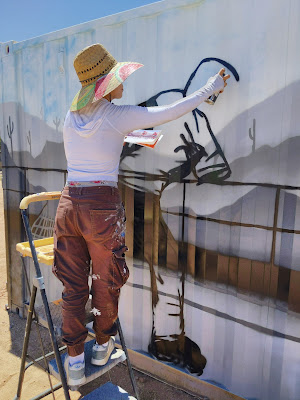 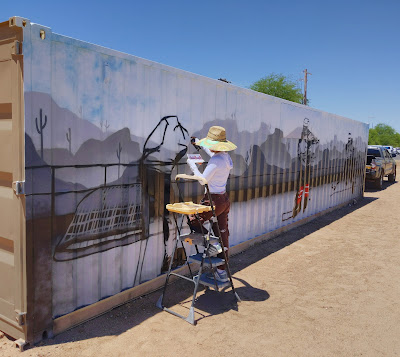 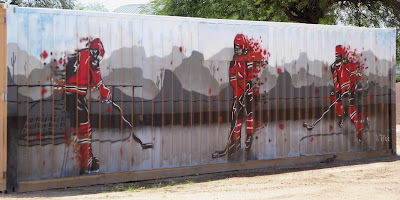 Let's jump back to the south side (near Grant Road) on June 22nd:

And the finished mural on August 21st:

(As always, you can click on a photo for a slideshow of larger views.)

Children added some blue animal spectators along the edge of the rink: 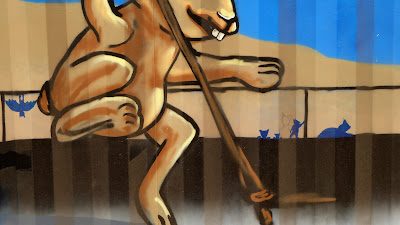 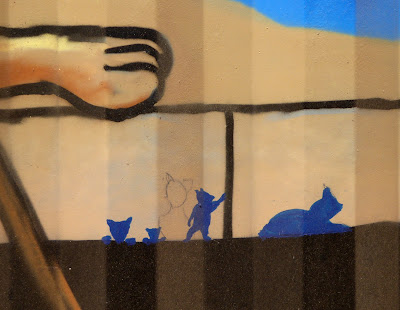 Stop by to see some hockey and check out the murals!
Posted by Jerry Peek at 6:01 AM No comments: 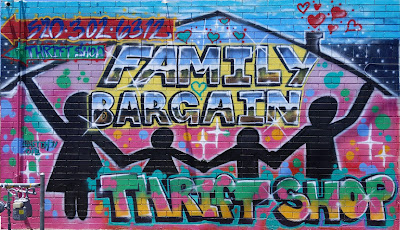 The east wall of Family Bargain Thrift Shop has the mural above at the left (south) side and the mural below toward the right (north): 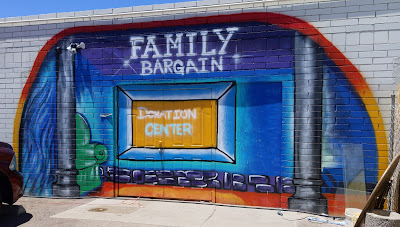 (The doors to the donation center are in the middle of the mural. As always, you can click for a slideshow of larger views.)

The Coordinator will work closely with the Public Art Manager to administer all public art program functions and activities, including new and active percent for art projects, relocations, deaccessions, donations and private sector projects.

https://artsfoundtucson.org/new-full-time-job-opening-at-the-arts-foundation/
Posted by Jerry Peek at 6:01 AM No comments:

The Tucson Department of Transportation & Mobility and Living Streets Alliance are hosting a block-painting party on 6th Avenue, by Armory Park and Children's Museum Tucson. The project will include painting a large, colorful mural on the asphalt. The community is invited to beautify 6th Ave & enjoy music, refreshments, activities and more! It's this Saturday, October 22, from 9 a.m. to 5 p.m. Details:

https://www.tucsonaz.gov/tdot/news/sixth-avenue-asphalt-art-block-painting-party
Posted by Jerry Peek at 6:01 AM No comments:

In 12 years, this garden mural has grown

The last time I visited the beautiful little street Calle de Jardin (Garden) was 2010. This June (2022) I was checking out a nearby mural for sale (including the house behind it). I walked a block west to see one of my favorite murals. I saw that it had changed: 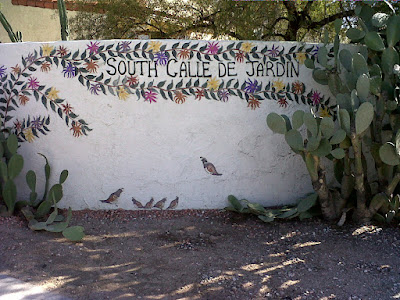 The prickly pear cactus are gone… and the quail must have eaten a lot of food in the past 12 years. :)

Next, closeups from left (north) to right (south), ending with the cute mailbox: 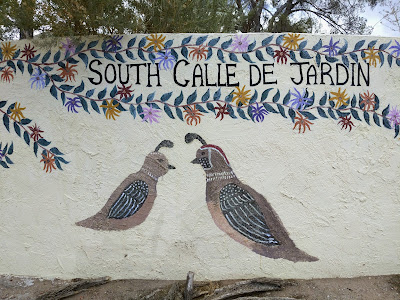 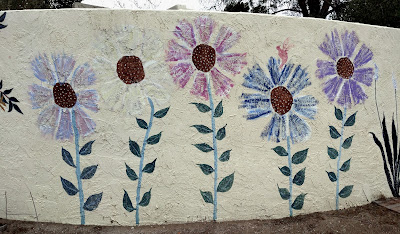 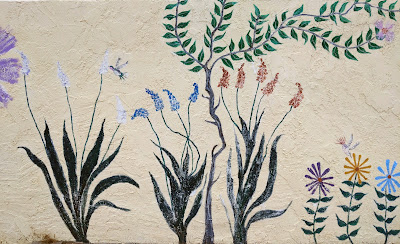 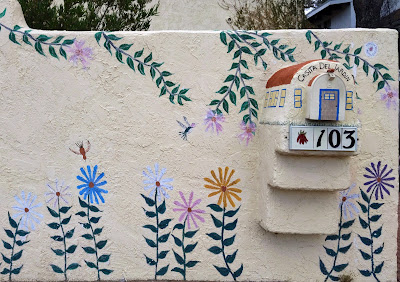 There are closeups of the mailbox in today's post Flashback to this garden box: 103 South Calle de Jardin on the Tucson Mailbox Art blog. Manny Garcia painted the original mural. I'm not sure if he made the updated version.
Posted by Jerry Peek at 6:01 AM No comments:

I found this mural on the west wall of the Tucson Appliance Company. 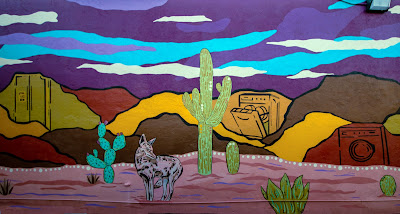 Thanks to BG Boyd Photography for that close-up.
Posted by David Aber at 6:01 AM No comments: 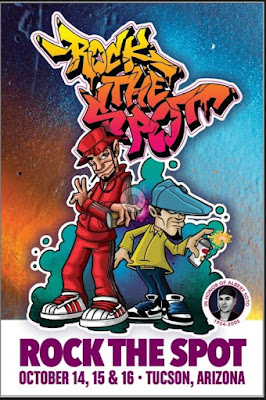 It'll be at 63 E. Congress (downtown behind the Cobra Bar on Congress Street… it's in a big parking lot).

Who remembers the WintaFresh weekends that Cyfi organized at Und1sputed Fitness on Stone? Here are photos and video from almost ten years ago: Murals being made, part 14: WintaFresh 2013.
Posted by Jerry Peek at 6:01 AM No comments:

I was unable to find the name or nature of the business at this location. However, there may be a clue as to its nature on one of the paintings displayed in the window. It has been signed by "Chronic The Hemp Hog". 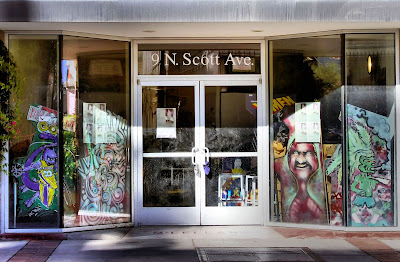