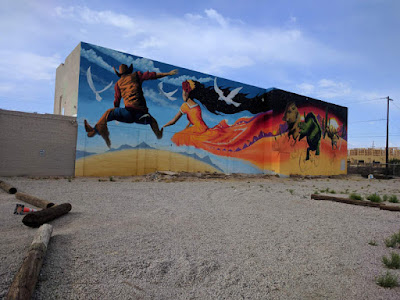 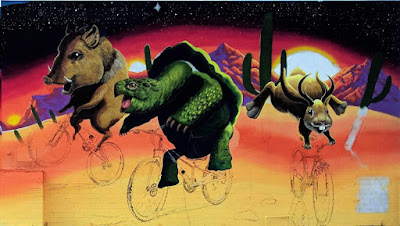 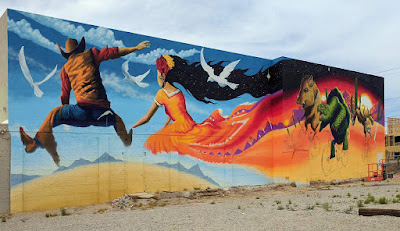 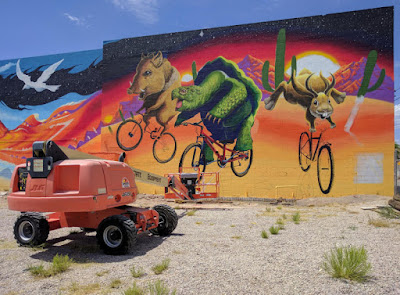 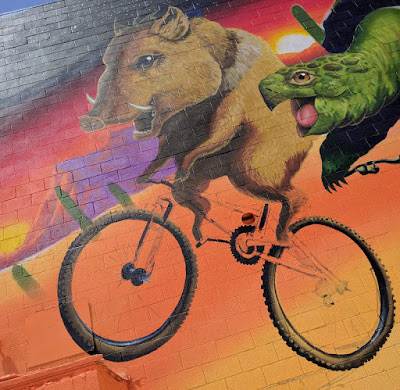 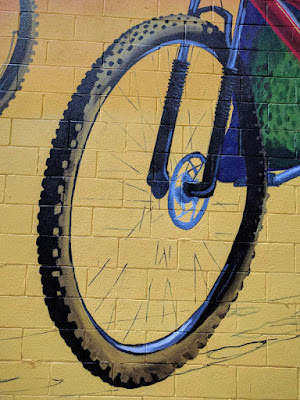 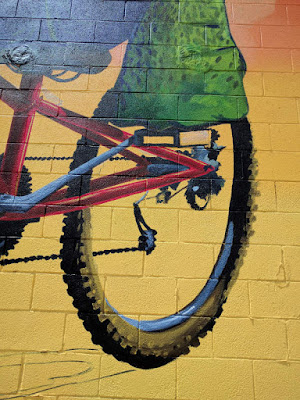 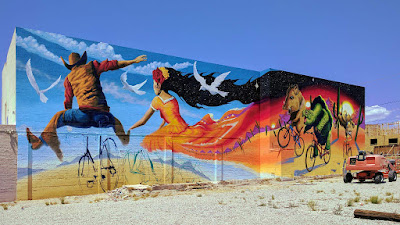 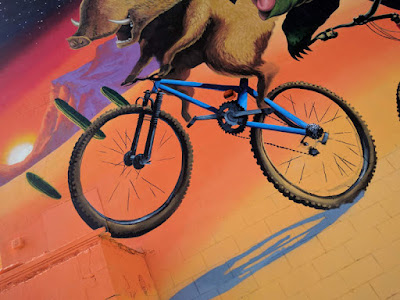 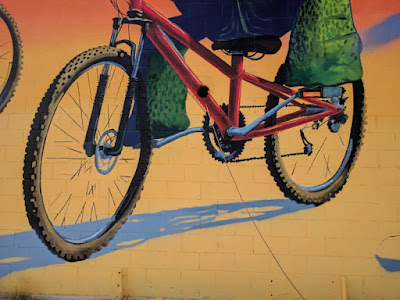 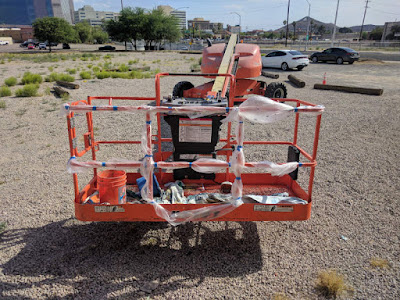 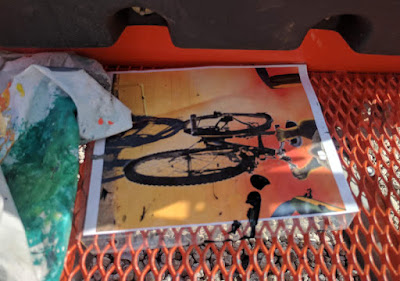 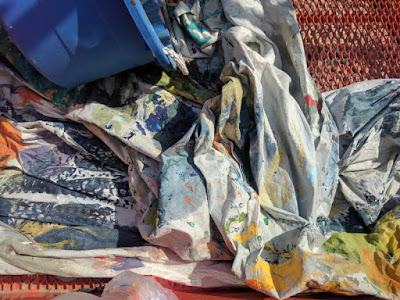 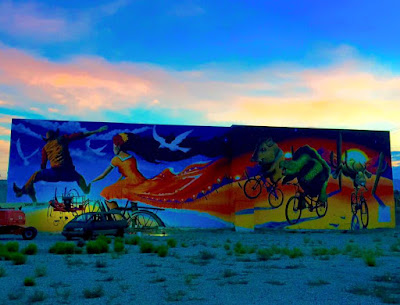 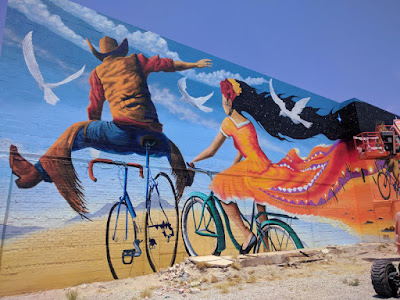 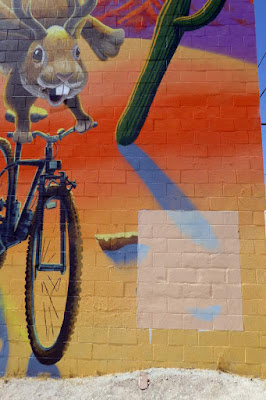 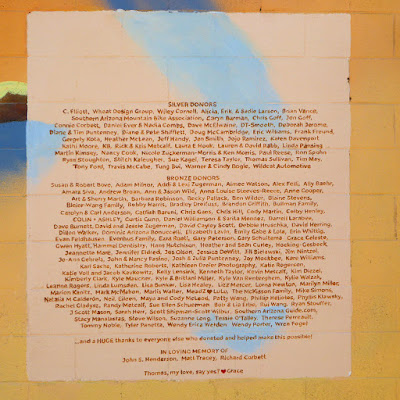 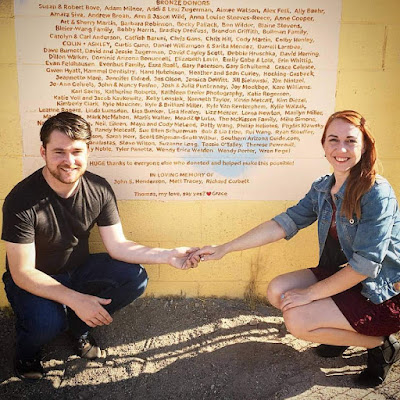 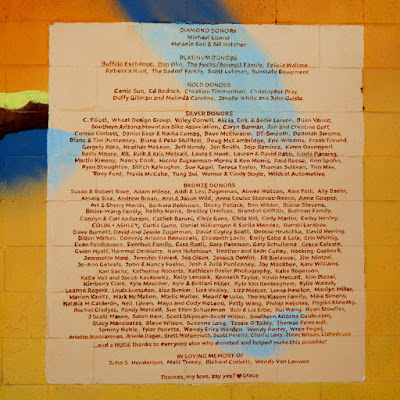 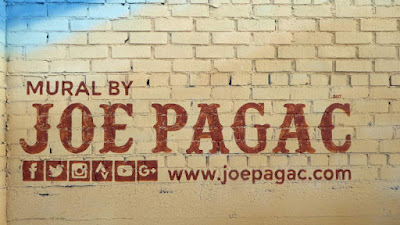 The March 27 article about Joe Pagac has a photo showing him in front of the design for the huge mural he was just starting to paint on Epic Bikes. The June 7 article about Jose Ignacio Garcia is especially detailed.

Local artist lets his murals speak for him

Pachanga (Murals being made, part 47b)

Pachanga is Spanish slang for paarty!  And a party is what was had on Friday, June 23rd to celebrate the completion of the "Talking Mural".  There was a car show, good music, plenty of food and drink, and, of course, the mural.  Lots of photographs by amateurs and professionals alike.  Here are some samples by David Aber:
And last, but certainly not least, we have Jerry Peek's photos taken earlier in the day of the star of the Pachanga, the mural itself.
As usual click on any photo for a slide show of larger and sharper images.

You can see the beginning of the mural at The Talking Mural (Murals being made, part 47a).
Posted by David Aber at 6:01 AM No comments:

Bad teeth and a bug 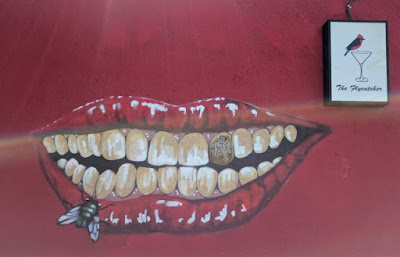 The Flycatcher, on 4th Avenue at the corner of 6th Street, hosts live local, regional, national and international touring music acts. It used to be Plush Tucson. That mural is along the 4th Street side. (Sun flare made the streak across the mural and the rays above it).

Hmmm, what's that especially-brown tooth in the top row? It says MUCK ROCK: 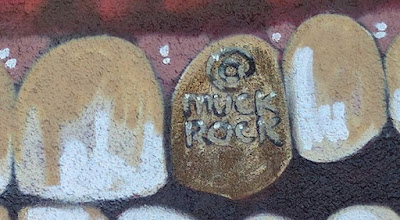 Luckily, because this is summer and most students are gone, I was able to pull into a parking spot nearby — on June 21st.

While I was out of the country, David Aber spotted this March 9th article about muralist Rock “CyFi” Martinez in Tucson Weekly's "Salvage" section:

Old Pueblo muralist Rock ‘Cyfi’ Martinez on graffiti culture in 2017 and the dismal glint of celebrity.

It's full of details and the interviewer's impressions. It's a good read. If you like Rock's work, click on his Label below to see his murals from this blog.

The Talking Mural (Murals being made, part 47a)

Due to finish by this Friday, June 23rd, each of the elements in the mural represents one of the businesses along South 12th Ave. The artist, Johanna Martinez (w/assistants Alex Jimenez & Amatha (Amy) Krier) plans to have interviews with the business owners. The audio will be accessible thru your cell phone, thus the name "The Talking Mural". Johanna and her crew have been working nights from sunset well into early morning. Mamta Popat, a photojournalist from the Arizona Daily Star was there and these are her Photos.  Here are the photos I took on June 19:
As usual, click on any photo for a slide show of larger and sharper images. To see other murals by Johanna or Alex on this blog, click their name in the “Labels” list below.

A Cronkite News (ASU) story in the Arizona Daily Independent, Signs Of The Times: Tucson Artist Aims To Capture The History Of The South Side.

This mural replaces an older one that you can see in our November 27, 2011 entry.

The rest of the story is in Pachanga (Murals being made, part 47b).

Update (January 11, 2019): Today's blog entry shows another mural with a QR code — on Toole Avenue. That mural, which is gone now, used your smartphone to make you look like an angel.