On Tucson’s Cesar Chavez holiday (his birthday is actually tomorrow), here are the commemorative murals we've posted over the years — and one more.
There's also a photo of a mural in the May 21, 2014 Downtown Tucsonan article Paulo Freire Freedom School to Offer New Public Downtown Middle School this Fall.

If you know of others, please leave a comment below. And enjoy our new city holiday!

At the northeast corner of East 28th St. and South 4th Avenue is Arizona Radiator and Muffler Service. They're just waiting for you to bring your car in with an overheated radiator or broken brakes: 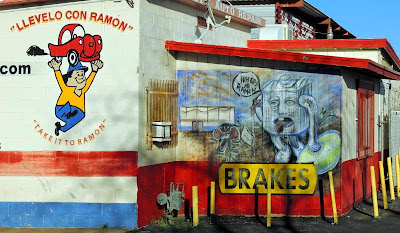 Toward sunset on February 11th, I rolled by — with no car problems, at least not yet.

In South Tucson, just south of the boundary with the city of Tucson (which is at 25½th Street), is a canvas (painted with acrylics, I think) hanging on the wall. It's on 28th Street, just west of 4th Avenue. (Mi Nidito, the popular restaurant, is about a block away.)

Because it's not painted directly on the wall, I've made this part of our “maybe a mural” series. I took the photo on February 11.

The Tucson Mural Arts Program works with Tucson youth to, as their blog (below) says, “to have the children and teens participate in [murals] to help them get involved and help build healthy, safe, compassionate and vibrant neighborhoods, increase literacy, reducing violence and beautify the places they live and work.” In 2013, one of their programs was a new mural on the north side of Woods Memorial Library. (The library already has “flying books” public art.)

So fine on South Vine

Jenna also sent me photos of murals that she painted on parts of a private home that you can see from the street. (We don't show murals in completely private locations.) Here they are: 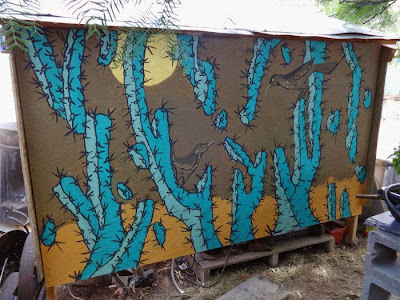 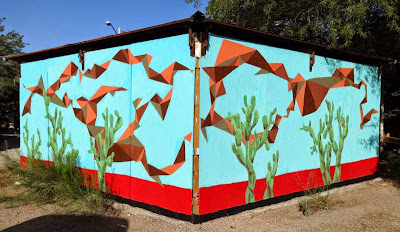 When you're sitting in front of Tokyo Imports, it's hard to tell — except for the front door and a drainpipe opening — whether you're looking at a building or a mural. The mural covers the entire front:

On January 22nd, we showed a bunch of David Aber's photos of Una cuadra llena de arte (an art-filled block) in South Tucson: the 3600 block of South 7th Avenue. But Dave sent more photos! He wrote:


On Jan. 22, photos were posted to the Murals Project from the 3600 block of S. Seventh Ave. All of these photos were in front, or to the side, of 3649 S. Seventh Ave. This is the headquarters of Tierra Y Libertad Organization (TYLO). Note that the acronym TYLO is embedded in each of the two main murals. Here is a link for further info: blog.whyhunger.org/2012/02/visiting-tierra-y-libertad-organization-in-tucson-az/.

In the alley behind TYLO there is a block wall that begins at TYLO and runs north to W. Veterans Blvd., a distance of 175 paces and at least 350 ft. It is filled with art.

I believe that all of the art in the alley is connected with TYLO in one way or another. I have no proof other than the acronym TYLO appears on the wall twice. Also, I consider the art to be one continuous mural. There’s no question that multiple artists worked on the project or that there are multiple themes. However, there was little or no attempt to distinguish where one artist’s work ends and another begins.


With thanks to Dave's explanation of these 17 photos, here's the TYLO alley! 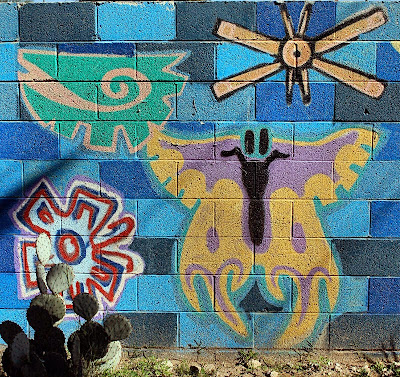 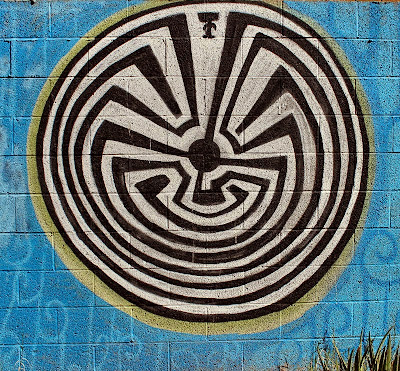 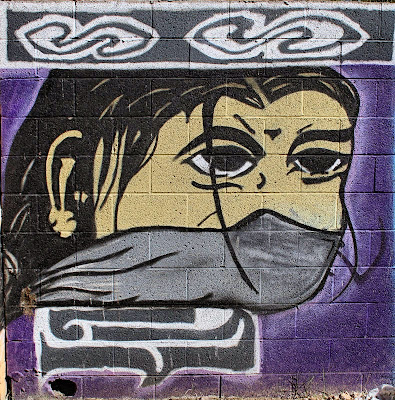 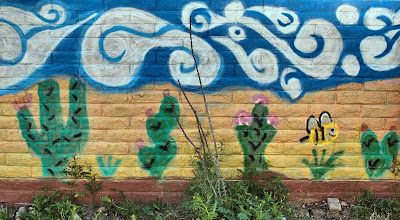 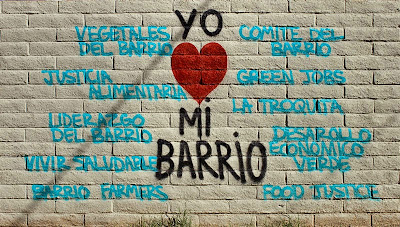 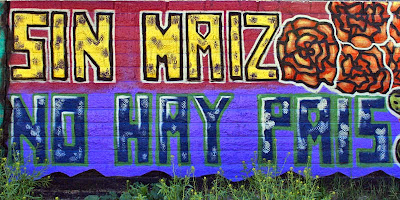 Murals being made, part 27: Repainting the Rialto

This time-lapse video shows Joe Pagac and crew painting a new mural on the northeast corner of the Rialto Theatre. He posted it on February 27th.

Eight and a half years have gone by since our first entry on The Tucson Murals Project — July 12, 2006. Randy Garsee, the longtime Tucson TV news anchor who founded this blog, wanted to spread the news about Tucson's murals. Now, you'll find one thousand entries here — and more than 1,000 murals, since some entries show more than one mural. There are plenty more to come!

In post #1000, we'll take a look at spectacular murals by one of Tucson's most prolific muralists, Jos Villabrille. He painted three-dimensional Sonoran Desert scenes — most of them two-sided — at the ends of Park Place mall concourses. Let's start with the southeast entrance, near unit 270: 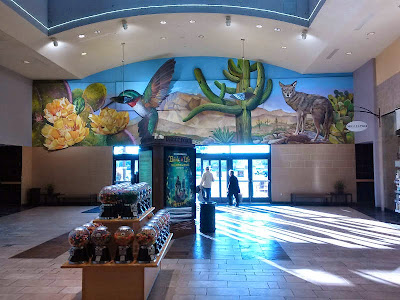 Looking up from underneath shows how three-dimensional these murals are. See the prickly pear blossoms and the hummingbird's wing? 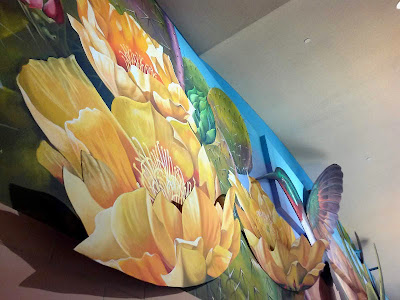 Next, the west end: first, entering Macy's and next, leaving it: 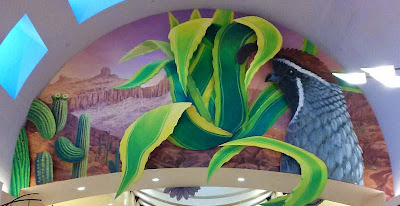 On to the south center, entering the food court: 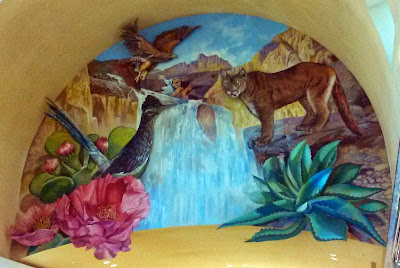 And, last, the east end: entering Sears and leaving it: 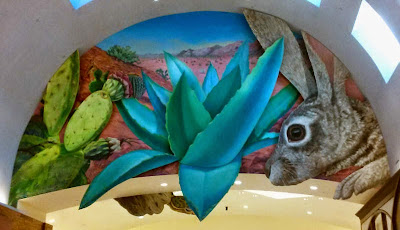 I took the photo tour on February 5th. Next time, we'll start our second thousand entries!