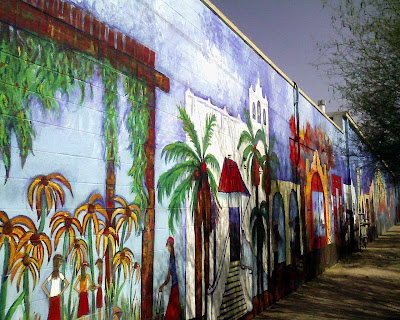 Actually, folks, it's not a mural of monsters... it's a very large mural. Artist Susan Kay Johnson (who also founded Tucson's All Souls Procession, along with many other artistic feats) painted this ginormous mural along an entire block on 9th Avenue, south of University Blvd., in the Dunbar/Spring Neighborhood. The mural has a procession of scenes; walk along the block (yes, it's at least a block long!) and enjoy it all. My cell phone camera couldn't capture more than small pieces of the whole thing. Maybe this is the excuse I need to finally buy a wide-angle lens for my other camera. ;-) 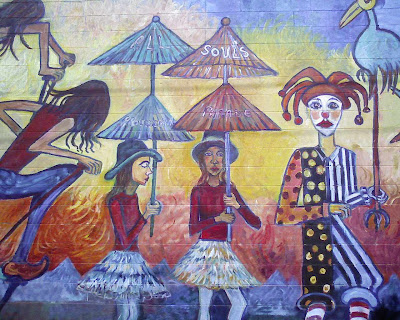 Update (October 1, 2014): A photo of artist Sue Johnson just as the mural had been painted is in the Tucson Citizen archives on April 20, 2007 at Mural honors neighborhood. 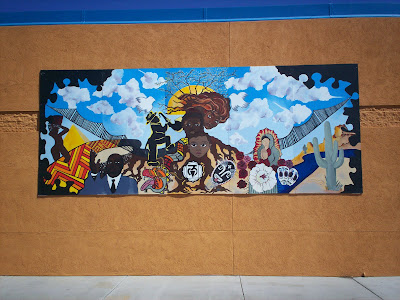 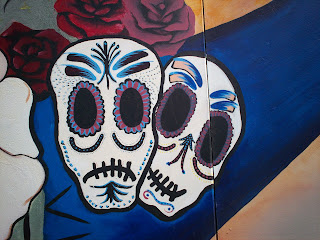 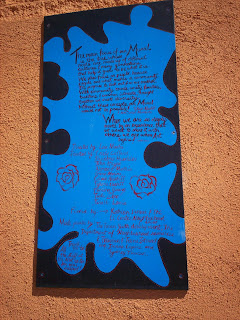 Out of This World

Explore an otherworldly mural on the wall of the
University of Arizona's
Phoenix Mars Mission Science Operations Center in Tucson. 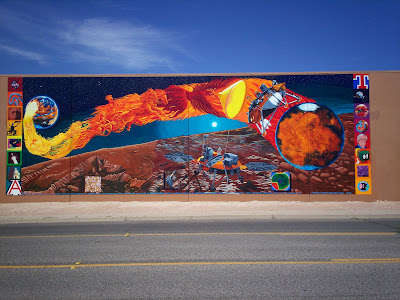 Here's an article from the UA about the mural
as it was being painted. 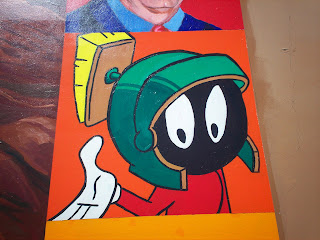 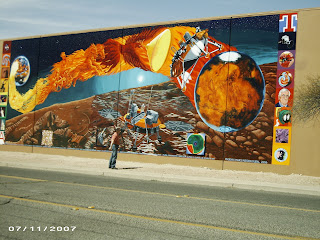 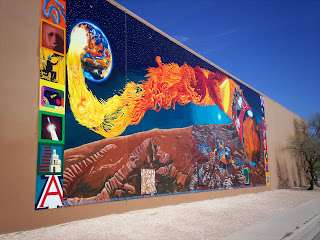 Hmm.. Date's not right on pic above. It was actually snapped by my daughter, Isabelle, in March, 2008. (The staring goofball on the sidewalk is me). Crazy Cameras. Funny story though: Isabelle told me about this mural, but didn't know where it was. So we were driving around, looking for murals, and I turned at 6th & Drachman. Bam! Nearly ran right into Mars! 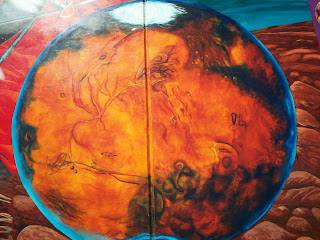 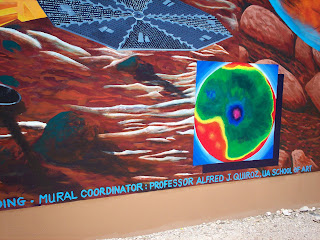 Email ThisBlogThis!Share to TwitterShare to FacebookShare to Pinterest
Labels: Mars, University of Arizona 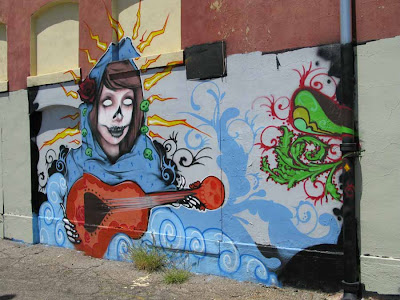 "I shot this mural in the alley behind the
Chicago Music Store in downtown Tucson."
Warren V. 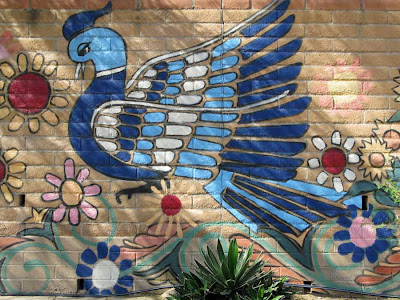 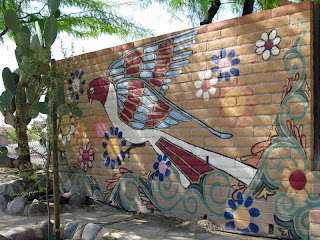 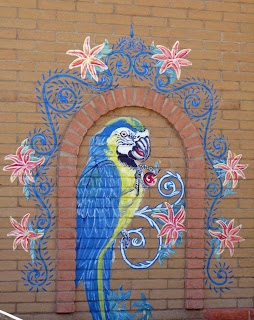 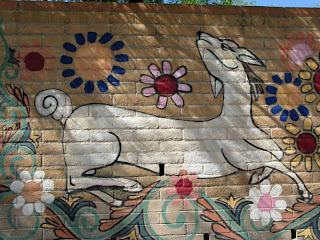 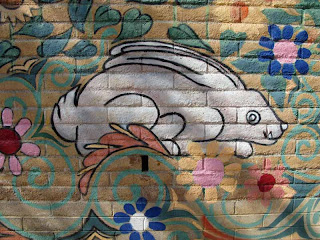 Not Your Father's Grafitti 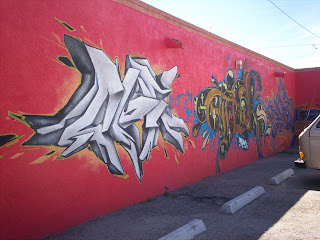 If you merely glance at the north side of Taquerias Lupitas on Stone Avenue, you may think some really talented grafitti artist attacked the building. 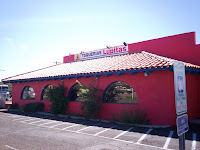 However, on closer inspection, you can see this is a work of art. Its location is unfortunate because there is not easy access to it, but if you park in the lot next door at The Coffee Vein, you can walk over for a closer look. 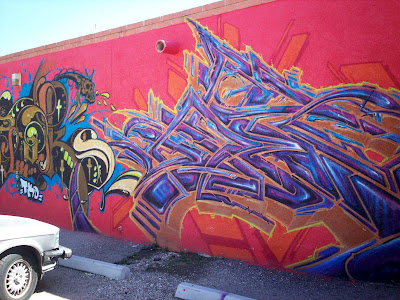 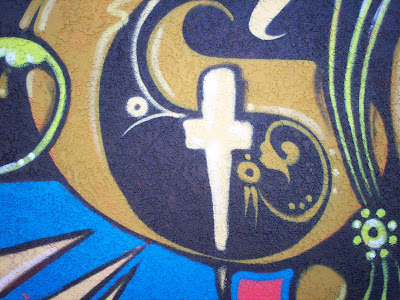 "These pictures were taken at the El Rio Neighborhood Center located at 1390 W Speedway.
cheers,
Warren V."
And as you'll be able to see from Warren's pictures is the signature of the amazing muralist and artist David Tineo. Tineo suffers from macular degeneration, but his vision of art will always stay with Southern Arizona... and the Tucson Murals Project. 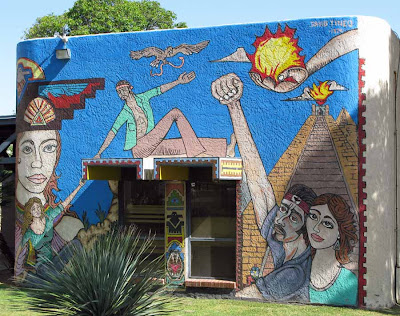 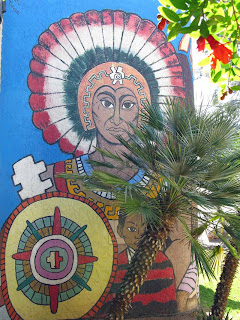 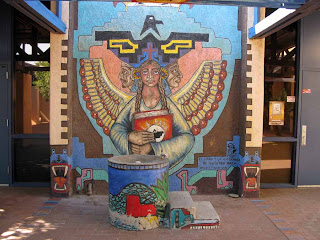 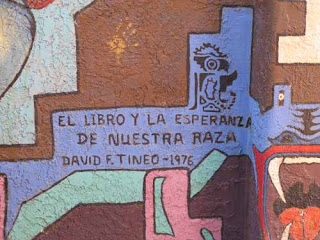 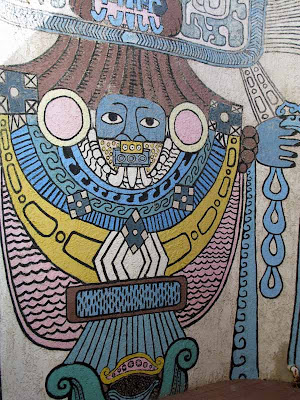 (Update by Jerry Peek: An Arizona Daily Star article on December 3, 2005, Opinion by Ernesto Portillo Jr.: World darkens for muralist says that Tineo painted his first mural in 1975, two years out of high school, here at the El Rio Neighborhood Center. In 2005, at 50 years old, David Tineo was losing his eyesight.

In another article, on January 22, 2006, As the light fades, Tom Beal wrote that Tineo started the El Rio murals in 1974 and restored them in the spring of 2005. He was losing his vision and "found himself losing balance atop the scaffold. He had to abandon the job and give up teaching at Pima Community College."

To find more about David Tineo and his murals, type his name into the search box near the top right corner of this blog.)

In The News: Tucson Murals Project

The Tucson Murals Project was in the Thursday, May 1st edition of the Arizona Daily Star. Here's the link: https://www.azstarnet.com/sn/caliente/236642.php.
Posted by Randy Garsee at 1:48 PM No comments: