The text in the mural is a Wendell Berry quote.
Photo taken on Sept. 24, 2016. Click on the photo for a larger image.
Also, here's a link to a much larger image on Flickr: Rillito River Mural
You can make it even larger and scrollable by clicking on the Flickr photo.
NOTE: May not work with all Browsers and/or Operating Systems.
Posted by David Aber at 6:01 AM No comments:

The artist is Jos Villabrille.
Photographed May 28, 2016.

Moth inside one of the bays at Smitty's Car Wash 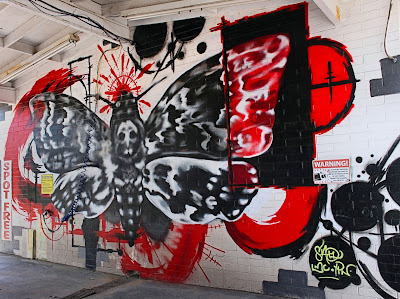 More murals of autos inside the bays of Smitty's Car Wash. 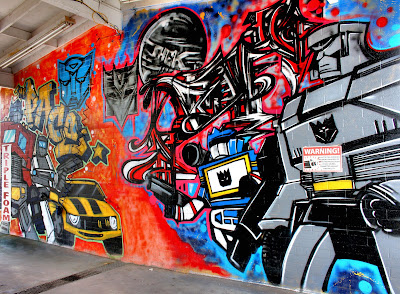 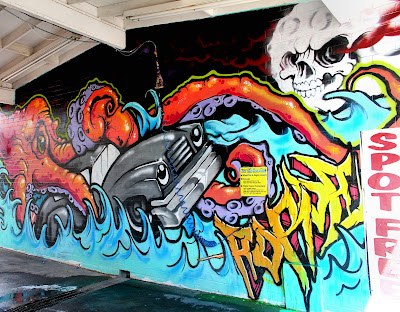 Cars I (more to come)

Murals of autos inside the bays at Smitty's Car Wash. 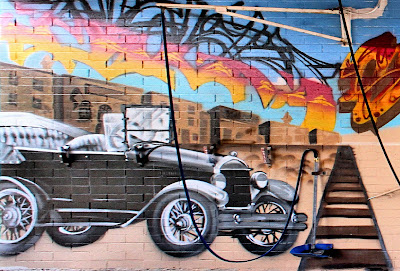 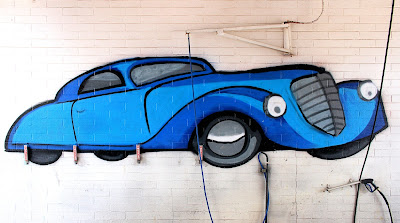 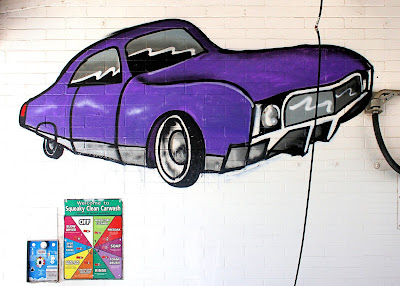 Photographed on 9/12/16.  Click on any photo for a slide show of larger and sharper images.
Posted by David Aber at 6:01 AM No comments: 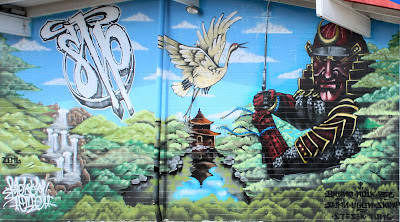 Two murals on a storage shed at Smitty's Car Wash.
Photographed on Sept. 12, 2016.  Click on either photo for larger images.
Posted by David Aber at 6:01 AM No comments:

Three nights ago, Friday night the 4th, he and the neighborhood just south of Mercado San Agustín inaugurated a new mural that's almost as big. It's like two murals in one. The main scene is the (married) Mexican couple of artists, Frida Kahlo and Diego Rivera, dancing. Behind them are parts taken from Rivera's famous mural Dream of a Sunday Afternoon in the Alameda, which is located at the Museo Mural Diego Rivera in Mexico City.

We'll take a look at Rock's finished mural, the mural in Mexico City, some closeups of each, then a series of photos of Rock's mural being painted. First, the finished mural at dusk (with a table in front of it — part of the celebration, but also to help show the size of this mural): 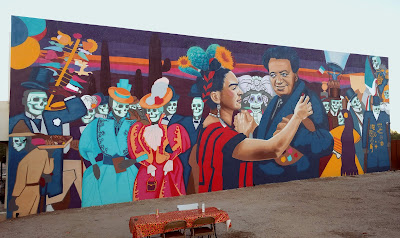 Next, a photo of Rivera's mural. I took it from the balcony above the mural. (Like always, you can click for a larger view.)

You probably won't see the similarities without some closeups. Near the left edge of Rivera's mural, just to the right of the balloons: 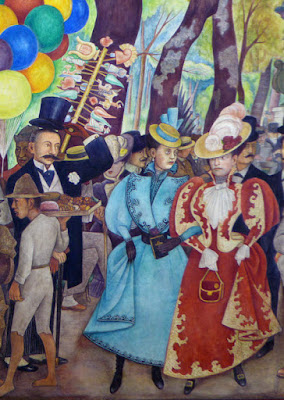 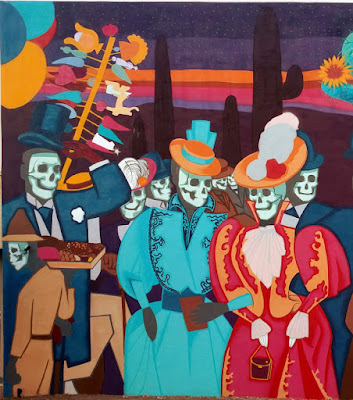 In the background, instead of the Alameda Central (a big Mexico City park), is a Sonoran Desert silhouette.

The rest of Rock's mural isn't taken as directly from Diego's. Here's the middle of Rivera's. In front at the left is Diego. Behind him, Frida: 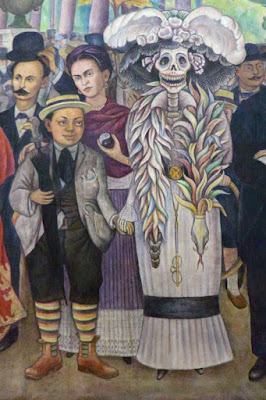 Next, Cyfi's. The man tipping his hat is smaller, more in the background. Frida and Diego are dancing, and Rivera is holding an artist's palette under one arm: 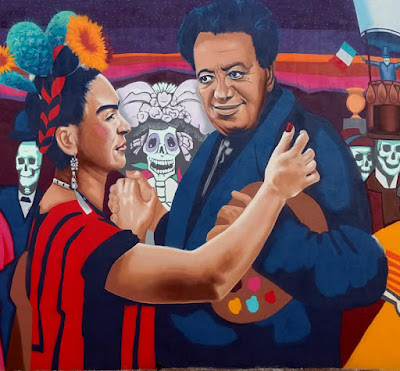 Rock added a cactus in Frida's hair. I think it's a part of his Cactus People series. Another is the Agave Lady in the 6th Avenue mural (see the start of this entry). A third is Mayahuel, the Goddess of Agave, in his 2014 mural on CostLess Auto Parts. You can photos of that mural on this blog, as well as on Rock's website.

Amazing mural, isn't it? I hope the news reaches the museums dedicated to Diego and to Frida in Mexico City!

Finally, here are some photos of the mural being made. On October 23, Rock is at the middle of a hydraulic lift, painting the left edge with a man who's learning mural-painting from him. 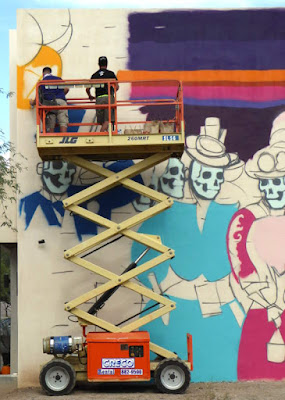 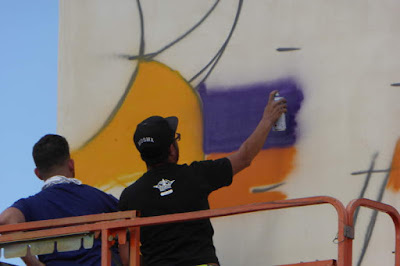 The center of the mural is finished more than the edges:

On October 26th, Rock is at work by himself. It's hot: 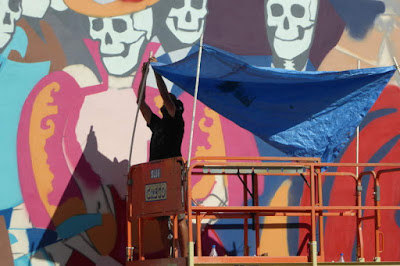 He's doing fast work! Three days after the previous set of photos, a lot of the detail looks basically finished: 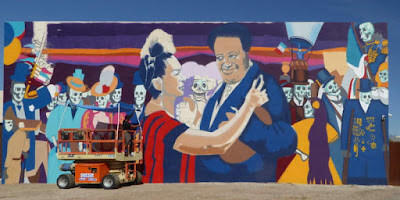 November 4th, it's time to celebrate. The lot in front of the mural is filling with tables, chairs, and guests (most, I'd guess, from the neighborhood). And, of course, there's the mural. Here are photos of the left, right and center: 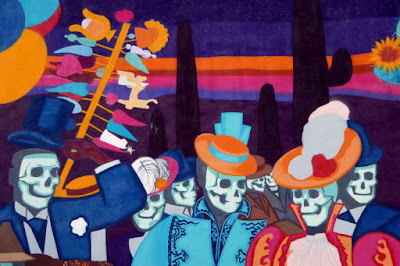 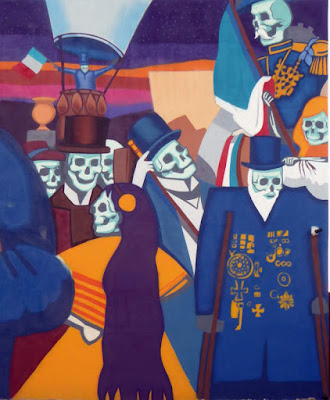 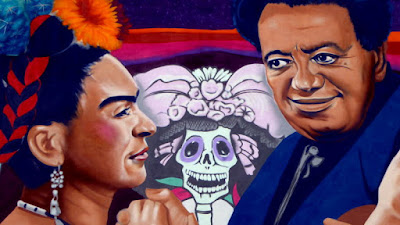 Posted by Jerry Peek at 9:31 PM No comments:

Two walls of a residence at 3061 N. Cardi Ave. have very interesting murals.  Here they are:

Click on any photo for a slide show of larger images.
Posted by David Aber at 6:01 AM No comments:

I photographed these tile murals on May 7, 2016 at the Holladay Fine Arts Magnet Elementary School: 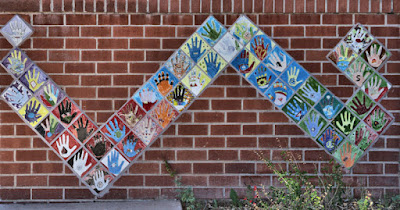 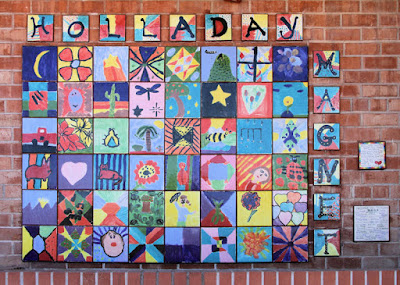 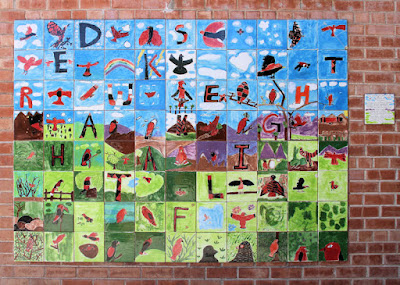 "Red Hawks Take Flight"
The last mural has a buried message.  Can you find it?
Click on any photo for a slide show of larger images.
Posted by David Aber at 6:01 AM No comments: