Love One Another: A Muralist Comes Forward 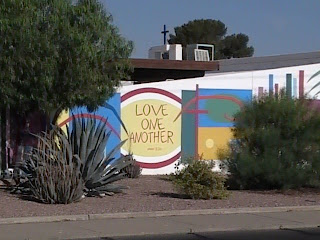 This mural originally appeared on the Tucson Murals Project in March 2008. Here's the original post, followed by an update:
This Christian message can be found "on northbound Tucson Blvd just north of Broadway. This mural is still there."
Submitted by Neil R. Amstutz
Now the update:
The muralist is Jim Ru. He recently e-mailed to explain the inspiration. "Hey and thanks for [the Tucson Murals Project]. It's really great. I actually considered doing the same thing many years ago when I lived in Tucson. The city is so full of mural art and it was undocumented," Ru wrote in the e-mail. Ru said he painted the mural the week of the invasion of Iraq "as a message to those driving by." He also added, "I love showing off your web site to people showing them all the amazing murals in Tucson. More cities should be so lucky. Jim"
And thank you, Mr. Ru. I hope this encourages more muralists and/or mural enthusiasts to view the Tucson Murals Project, let us know the name of the muralist (if it isn't posted), and contribute or pass along our web site. Tucson's murals are a true asset to the Old Pueblo. Thanks, Randy Garsee
Posted by Randy Garsee at 2:09 AM