Fourth Avenue (the section between downtown and the U of A, that is) has so many murals that I'm always spotting something new. This mural has been at 526 N. 4th for a while, I guess — the store opened and closed before I caught this early-morning photo: 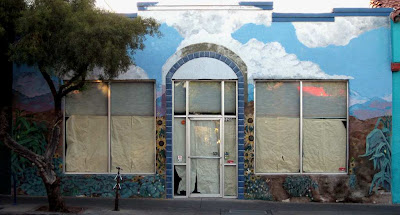 (Update: By October, the mural was gone. You can read more here.)

Update (January 15, 2015): BreakOut Studios has a new mural on the north side of their new location.
Posted by Jerry Peek at 6:28 PM