Half Hidden on Country Club

Some streets in Tucson have more murals than others. (Some streets — in downtown and in the city of South Tucson, for instance — have half a dozen murals on a block.)

One of the "other" streets is Country Club. So far I've only spotted four murals along its entire central section — from near the Rillito on the north to the railroad tracks in the south. I've posted two of those so far. Here's the third. It's actually a pair of murals, partly hidden on two sides of the Tucson Alliance for Autism building, 1002 North Country Club (the corner of East 2nd Street): 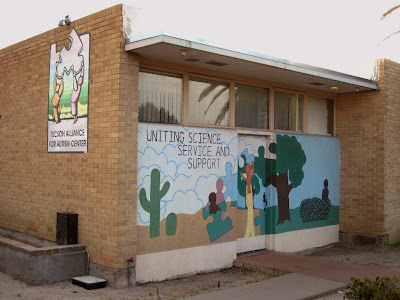 My daughter, Jennifer Gust and Becky Classon painted this mural for their Girl Scout Gold Project. Jennifer is Autistic.