Cortaro Farms, now and then 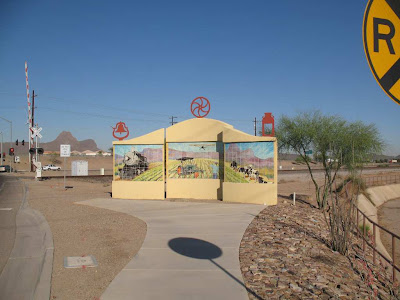 These photos are from Howard Rains, who wrote on Thursday that he loves tracking down murals as he rides inside and outside of Tucson. Above is his photo from near the corner of Cortaro Farms and I-10, on Cortaro just east of the railroad tracks. Below, I've cropped to just the mural and stretched the photo a bit (with the GIMP editor):

Thanks as always, Howard!

Update (September 23, 2016): The steam locomotive depicted (Southern Pacific No. 1673) is on display at the train depot on Toole Avenue in Tucson. Thanks to David Aber for the tip.
Posted by Jerry Peek at 12:07 AM