Fly By Night at TUS

Tucson International Airport is a great place to see art! Unfortunately, some of it is in secured areas where you need a plane ticket to see the art. We usually don't cover murals in locations that aren't accessible to the public without paying, having a ticket, etc. But I decided to post this one because it's an example of the great art you can see at TIA if you do have a ticket: 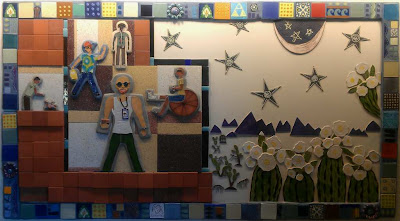 It's titled Fly By Night, dated 2008, by Santa Theresa Tile Works. The different colors of light around the mural make it look strange in a photo, but it's great in person. It's on the B concourse, near the men's room between gates B3 and B4. I took the photo on November 10th.
Posted by Jerry Peek at 12:01 AM