David Aber and I have so many mural photos that we're going to start posting them here three times a week (instead of twice).

I'll start with a few photos that Mark Fleming sent me between 2013-2015. He contributed a lot of photos during that time. As I was cleaning out my TucsonArt.info mailbox yesterday, I spotted a few photos of Mark's that (I think) I never posted here. Here's the first one: a mural on the side of the former BLX skate shop during September, 2013: 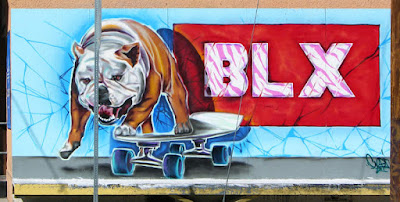 While BLX was at that location (it's since moved from 7th Avenue to 7th Street), they had a new mural (by a different muralist) every month or so. Some of the others are:
More of Mark's photos on Monday.