I was walking along Tyndall, just south of University Boulevard, two days ago. The south side of the buildings that face University (along their opposite side) have a series of brilliant mosaic tile murals. There used to be a tree mural wrapping around the southwest corner of the building along Tyndall, but now — as you can see — the mural is partly covered by a sign advertising the business to come: 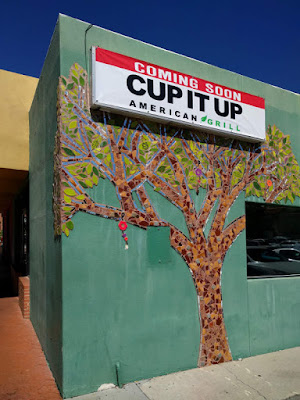 This is almost as much respect for art as the destroyed murals along 22nd Street at Aviation Highway. Trashing a tree for natural food (which is what Cup It Up serves)?? Couldn't the business owner have made the sign more squat and put it just over the mural?

Update: Not long after this blog entry appeared, I got a message from the restaurant that the mural had already been damaged before they moved into the building and replaced the existing sign with another at the same place. Fair enough, I suppose, though for people who don't know the story (as I didn't) it still shows the owner in a bad light. Because it's a mosaic with lots of different-colored and shaped tiles it seems like this would be a fairly easy mural to fix.

Update (July 12, 2018): I got email from Amy Collinsworth of Ben's Bells to point out that they designed the mural to fit around the original sign. As you can read in the previous update, the owner said he just replaced the original sign. (That still left me the impression that the original sign had been placed on top of the mural, since the tops of branches seem to go under the sign. But I was wrong!) Here's part of a photo that Amy sent to show the original installation: 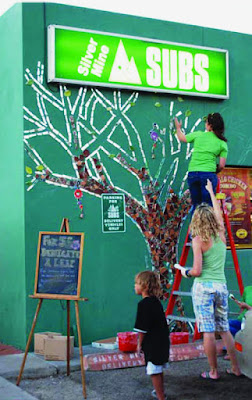 Thanks for pointing this out, Amy — and my apologies.