A desert treat along Treat Avenue

That's what you'll see along Treat at the northeast corner of 8th. It's the back yard wall of a home there. At the left (north) edge is a utility box that's part of the mural. Here are the two halves, north and south:

One of the homeowners was there when I rolled by. He told me a few stories of how he and his wife worked with the artist, Jaime Valdez from Sonora, as the mural took shape. Jaime worked from right to left. The homeowner wanted octopus tentacles, but there wasn't room on the wall… so he asked Jaime to paint on the side of the utility box at the left end (and said he'd take responsibility if someone doesn't like it): 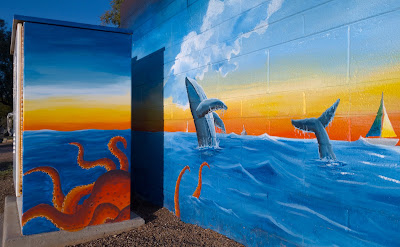 They have a favorite desert tortoise, so Jaime added it above a drainage slot — and a gila monster on top of the cactus nearby: 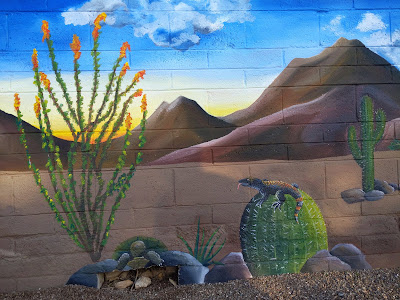 Here are Jaime's signature and phone number. He's on Facebook too: 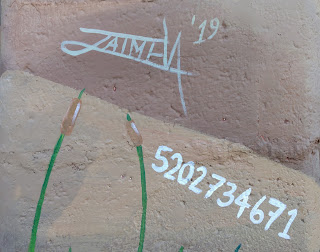