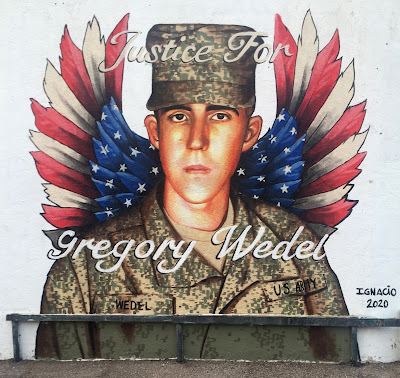 Marisol Arana sent photos and a video that she and her husband Roberto Flores took of a new mural by Ignacio Garcia. It honors a Fallen Soldier, Gregory Wedel. Here's what she wrote in email:

Gregory was a Deserter to the Military Had gone missing days before getting out of the Army. So when Soldier Vanessa Guillén went missing and searches began for her , his body was found Aug. 2019 . Buried close to where later Vanessas body was also found. Vanessas story was everywhere in the media , news and getting so much attention his mother was feeling a little desperate and forgotten. So a member of a group called “Voices of the voice less” (Andrea Diaz) asked we do a mural for his mother. For days and weeks they looked for a wall and no luck so I knew I was miles away but I decided to offer our wall for it and that’s how it all started. Gathering the funds for it wasn’t easy either but we made it happened and Ignacio the artist also donated some of his time since the go fund never reached its goal. Below is a little copied piece of Gregorys obituary. We are military parents and have a active duty that’s currently deployed so fully feel for Military.

“During his time in the military he went from Ft. Leonard Wood to Korea. After serving in Korea he was assigned to Ft. Hood. He then served in Kuwait and then returned to his base in Ft. Hood where he lived until his death. He received the following awards while serving in the United States Armed Forces; National service medal, Global war terrorism expeditionary medal, Global war on terrorism service medal, uwait Defense service medal, Army service ribbon, Overseas service ribbon, Army achievement medal 2nd award, Army good conduct medal, Certificate of achievement 2nd award, and Driver mechanic badge.”

He went from awol, to deserter , and when his remains were found they had such a hard time taking that off his record. He was obviously murdered and never went awol. His family fought for his honors until they made it right. He finally had a funeral almost a year later and was buried with all his honors.

This video and the photos below it show Ignacio painting. 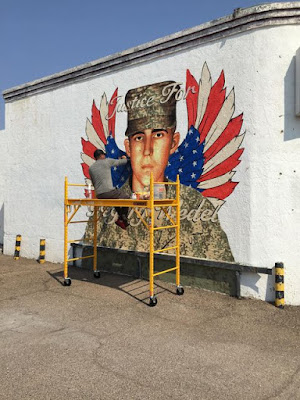 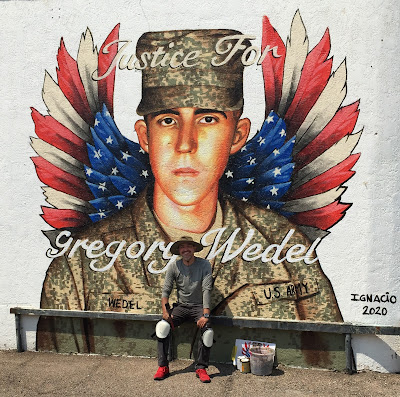 Thank you so much for posting this mural and honoring Gregory Wedel on Veterans Day.