Depending on your frame of mind — and maybe where you live — "4th Avenue" means different parts of Tucson. There's the primarily-residential street north of downtown. Between downtown and the university comes the chunk full of fun shopping and eclectic eating. Another stretch of homes fills Fourth south of downtown. Then, south of 22nd Street, Fourth morphs into a string of businesses and (mostly) Mexican-style restaurants as it crosses through the city of South Tucson. (Past there, I'm not sure... but I'm planning to head far south to check that mural scene.)

For this 300th post — almost five years after Randy started blogging about Tucson murals — here's the latest I've found along Fourth: north, central, and south. (I also have lots more to post from South Tucson!)


In a neighborhood on the north, the home at 1248 N. 4th has wraparound murals — mostly on Mabel Street. The first view below is from the east end along Mabel, and the second is from the west: 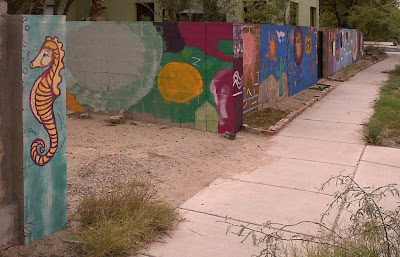 Head south across Speedway and pass Catalina Park... and you'll be on the university/downtown section of 4th. I'm surprised that I never snapped these next two murals. They're on the northeast corner of Epic Cafe, 745 N. 4th. (As always, you can click on any photo for a larger view... and use your browser's "Back" button to come back.) 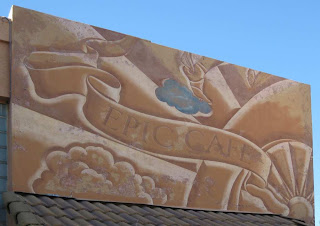 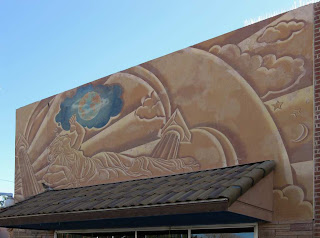 Sacred Art and Piercing Studios, 315 N. 4th, is one of the businesses that keeps mural-hunters busy. Back in August, we showed two of their murals. Here's the same wall a few days ago (January 22)... the mural is signed Rock Martinez & Ruben Moreno: 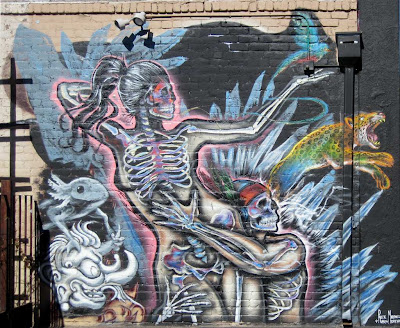 On a window of Food Conspiracy Co-op, 412 N. 4th, is the best-hidden mural on the street... this little gem over the shopping carts, a sort of self-reflection: 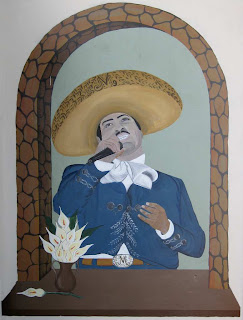 Let's finish this trip down Fourth Avenue in the section near South Tucson. At the corner with 22nd Street, La Buena Cocina (248 E. 22nd) was closed for renovation when I stopped by yesterday afternoon. I hope this mural will still be there when they reopen. (Check out the "shelf" at the bottom. It's painted onto the flat wall, but — in this photo, at least — it looks like a piece of wood.)

Thanks for coming along on this lengthy tour of one of Tucson's best mural streets. As I said, there'll be lots more to come from farther down Fourth, and the rest of South Tucson, in the next hundred posts (and the ones after those).
Posted by Jerry Peek at 9:22 AM