As you drive around Tucson, you'll see plenty of washes — with a sign that has the name of the wash (and often — FYI to Tucson visitors — two-way streets on both sides of the wash... there's more info on Tucson traffic quirks on my Tucson page). Most of the washes aren't much to look at, otherwise — and definitely not "beautiful."

One exception is the Bronx Wash mural along Linden just west of 4th Avenue: 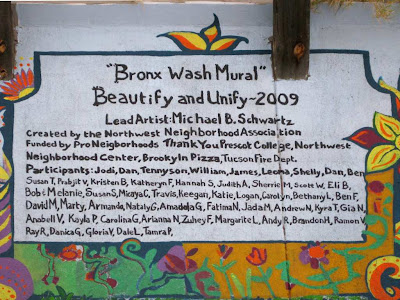 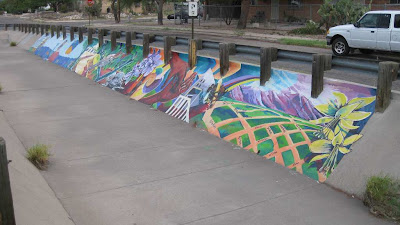 At the right side of that second mural is a map of the neighborhood.

Update (April 29, 2015): I just came across an October 2009 article about the painting project on the National Service blog.

Update (December 19, 2016): The west (right) end of the mural has a new part; you can see it in today's entry Bronx Wash mural revisited, part 1 of 3. Two entries after it show the new part being painted and detailed photos of the whole long mural.
Posted by Jerry Peek at 11:32 AM