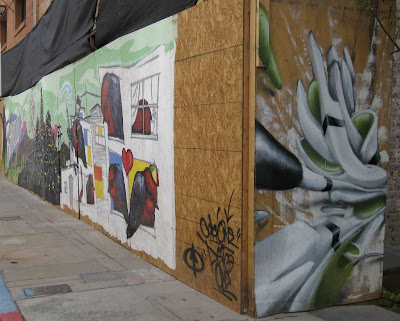 Deconstructed art is a term for some contemporary art and architecture. But I think it's probably also a good word, by now, for this mural that I saw almost a year ago. It was around a construction site at 44 E. Broadway — last December 15 — where the Sonoran Institute was planning to move in. I haven't had a chance to check it in the last few months, so I'll let you do that as you drive by. If you have a chance, please let me know (by email or with a comment below) if it's been "de-constructed" by now...

Update (May 15, 2012): I found a post on the blog Tucson Kent's World with photos of this mural being painted. Mural Artists in Downtown Tucson has the story, and three photos, of Rock Martinez and Ed Muren painting the mural. The post is dated October 22, 2010 — two months before I snapped my photo.
Posted by Jerry Peek at 12:01 AM