I thought I'd follow yesterday's post of the sign from Ted DeGrazia's former studio with a photo of the porch at 146 W. Drachman (on the northeast corner with 10th Avenue). 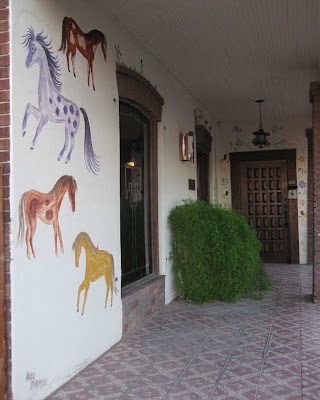 When I find a mural, I look for a signature. This one, at the bottom left, had a familiar name: 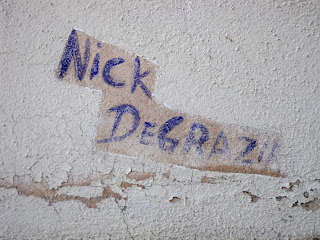 I'd heard of Ted DeGrazia, but I hadn't heard of Nick. A son of Ted's, maybe? A Google search this week for Nick Ted DeGrazia turned up a couple of stories: Bonnie Henry's column Ted DeGrazia: Always time for the kids (Arizona Daily Star, June 7, 2009) and a guest commentary in Tucson Weekly by Ron Butler, Buying DeGrazia on eBay: a tribute (July 21, 2005). Apparently Nicholas was Ted's son, and Mr. Butler's article said:

Nick, who worked as a boxer and a wrangler, decided to take up painting. He copied his father's work in the simplest of styles, mimicked the colors and of course the very familiar and famous "DeGrazia" signature which, one assumes, he was fully entitled to use.

I knew Nick Degrazia back in the 1980s and 1990s. He was a character.
He had a girl friend named "queenie" and he hung around Coco's on Campbell Ave (now where Sauce is). He was a good guy and a very good painter. I always thought he was better than his dad. Nick's studio used to be his dad's old studio at Campbell and prince, the South East corner there. They tore it down in the 1990s and put up a Chevron station there. Nick was mad as hell at his step mother for selling that land. It used to have a adobe building and a fence all the way around it made of cactus thorns that the old man, Ted had made. It was was quite a unique place.

I knew Nick as a kid. We attended Catalina High together. He was always a nice guy. We went our separate ways in life after high school. I went into the service and Nick apparently went to St. David years later. I met him and his sister when I was hired to mow his mothers lawn on Ft. Lowell road in Tucson. I met Ted Degrazia through Nick shortly later. This was around 1956 or 57. Lost track of the family over the years, but they were all nice people.

I don't know how anyone knew nick in the 80s or 50s when he was born in 93. I have an original painting of his on a children's headboard. It's in bad shape buts beautiful. RIP nick.

Hello I found a painting the name N .Degrazia its a clown on the back it says To Dorothy From Nick . The canvas looks older . The name on the back is not signed the same as the front .not sure how to add a picture . I did here he liked to give paintings like this to women . Any info