Winsett Park mural (before) being restored

If you've walked along Fourth Avenue or been to one of the festivals there, you've probably seen the mural “Together We Thrive” that wraps around Winsett Park, 316 N. 4th.

The Tucson Arts Brigade is restoring the mural. If you're between 13 and 17 and you want to help, they meet each Tuesday between 3 and 5 PM at Howenstine Magnet High School, 555 South Tucson Blvd. There's more info on the Tucson Arts Brigade website murals page; though it (currently) says the project will finish in April, Michael Schwartz (TAB's Executive Director) told me that the target date is now June 15th. If you'd like, you can bring a mentor up to age 22 or so. 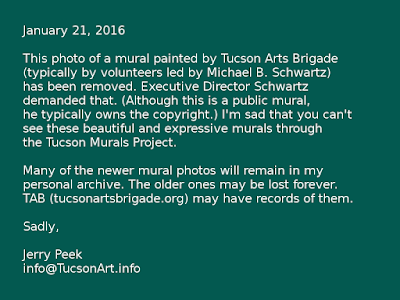 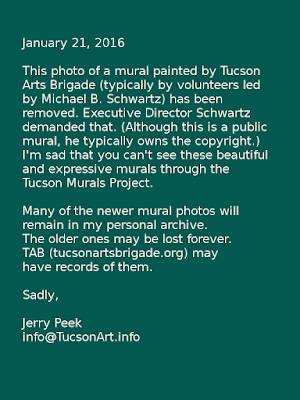 We've posted some earlier photos of two parts of the mural (above), as well as a photo of the stage (which isn't shown above).
Posted by Jerry Peek at 12:01 AM