On the road in Deming, NM

I've been traveling back and forth between Albuquerque and Tucson — which is part of why I haven't been posting many murals! I spotted this one while I was pulled off I-10 in Deming, New Mexico. It's behind an empty lot along Gold Street, halfway between Pine Street and I-10... click there for a satellite view from Google. 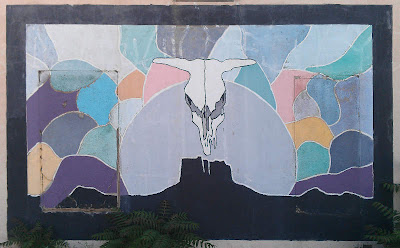 (By the way, Deming's cheapest gas stations tend to be along the western part of Pine, which parallels I-10 a couple of blocks to the south.)

This was done in 1987 as a Deming High School art project.