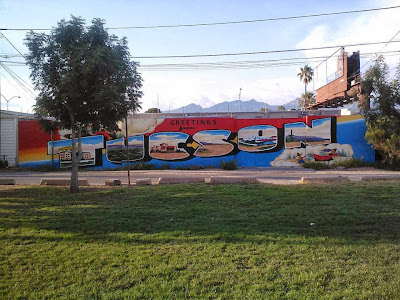 This is a photo of the “Greetings from Tucson” mural on 1st St. & Arcadia (located in Swan Way Park on the back wall of Flooring Direct). The mural was done to beautify the park... because the wall was consistently a target for graffiti. Pittsburgh Paint (previously located on Swan) generously donated all the paint, and Lowe’s (Speedway & Kolb) donated paintbrushes. Lead Artist Allison Miller hosted a community paint day in collaboration with Big Brothers Big Sisters of Tucson. The mural was completed in August, 2012 and was inspired by the historic “Greetings from Tucson” postcard.

Allison's latest project is to organize a community mural for the Arizona-Sonora Desert Museum. If you’re interested in participating, call her at 520-883-3071.

Thanks so much, Allison!