Outer space in a strange place

The building at 191-197 East Toole (at the corner with 6th Avenue, just south of the SPRR tracks) is full of creative people... and some of them like to paint. Some of them like to paint extraterrestrials (a.k.a. “aliens”). The northwest side of the building (on the Skrappys end, facing the parking lot) has always had an E.T. theme — as in the photos from May 25, 2009 and the second photo posted on May 1, 2010.

Then there's the side by the tracks. On May 25, 2010, I posted photos of the side by the tracks (the northeast side) —and just around the corner, on the south end of the east side. Thanks to a heads-up (and some new photos; see below) from super-mural-finder Mark Fleming, I came back to check out the north side on October 3rd. Here are two views from my not-too-happy cell phone camera (which didn't like the sun glaring in its little lens… and the lens was dirty, too): 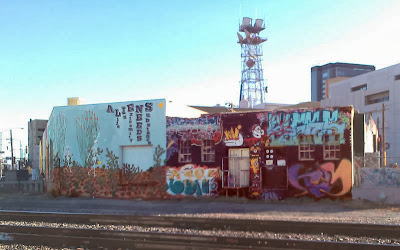 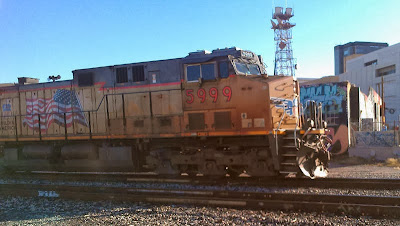 Here are two of Mark's photos: 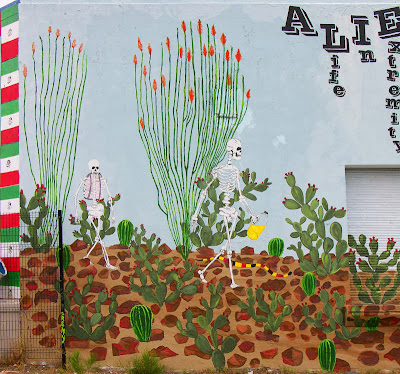 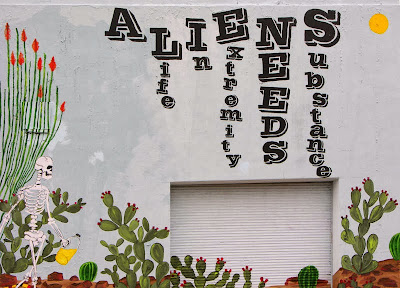 Update (December 31, 2019): The right-hand side looks almost identical six years later, but the mural at the left is ruined. Today's entry has a photo.
Posted by Jerry Peek at 3:01 AM