Just over a year ago — October 18, 2013 — I took some photos around Borderlands Brewing Company, along the tracks at 7th & Toole. Last month — September, 2014 — Mark Fleming sent me an update.

I drove up Toole to see what had changed. The paste-up mural from two years ago had fallen apart; to the left of it was the newer mural Mark photographed: 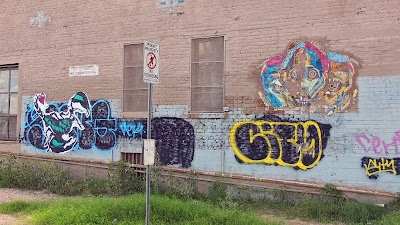 Here's the close-up that Mark sent: 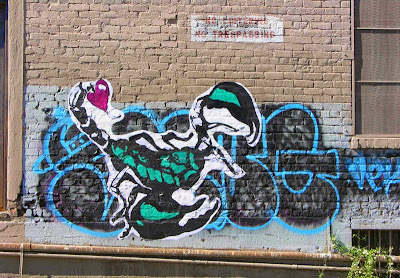 Update (March 10, 2015) @JoePagac just tweeted a link to an Instagram photo of him repainting part of this wall by the tracks. Just by coincidence, I caught some photos of the whole wall — but without Joe. I'll post those photos, and the completed wall, in the next few weeks.

By the way, you can see more photos of Joe and some of his work at instagram.com/joepagac/.

Update (April 1, 2015): Joe is finished with the mural. I have a copy of a tweet (from Twitter) showing him finishing up: Joe Pagac finishing Borderlands Brewing mural.