A long-ago architect friend of mine kept telling me that, when I’m in an interesting place, “Jerry, look up!”. In the case of the mural/sign here, the artist, Johanna Martinez, texted me to tell me that she was working on it. I didn't get a chance to see her as she painted it, but she sent photos of the mural in process and the finished work. She's painted at least two other murals in the neighborhood, and other murals too. If you'd like to see them, click on her name in the “Labels” list at the bottom of this entry.

I headed to the Barrio Viejo as soon as I could: January 12th. I found the finished mural on the west side of the street, between the doors to 630 and 648 S. Meyer.

Here are the three photos from Johanna: 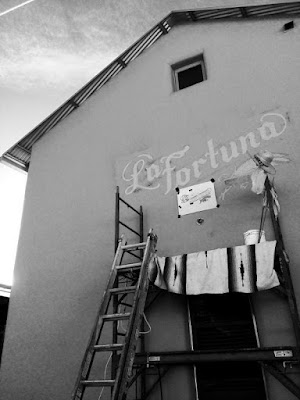 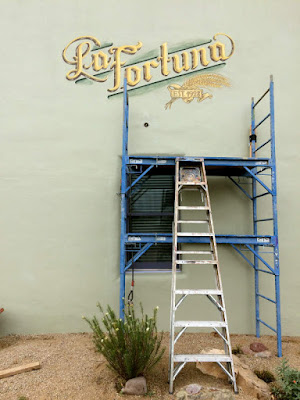 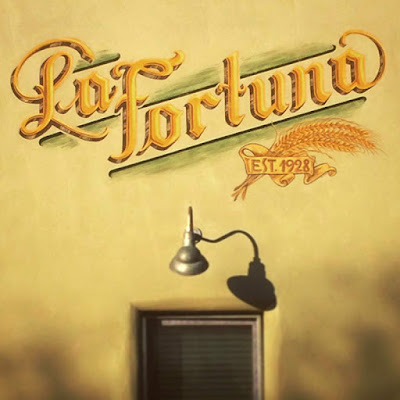 I love that last photo. It looks like it was taken near sunset (or maybe sunrise?).

She wrote that La Fortuna “…was the site of the first Native owned bakery in that Barrio I hear. Not sure about the bench.

“It's one of the buildings that are on the site of four Rob Paulus designed houses I am told.”

It's a nice place to sit. (Click there to see the story on the Tucson's Pocket Parks blog.)

Update (March 27, 2017) while searching the Web, I found the article “There's a new "ghost" sign in the barrio” (click there to read it) on the True Tucson blog. It has background info about La Fortuna and links to a couple of stories: