Murals being made, part 46b: Tucson's biggest

We're following the painting of what will (for now, at least) be Tucson's largest mural. It's on the south side of Epic Rides, a Tucson bicycle shop. Joe had planned to finish the mural by his wedding on April 22. But as of May 22nd, it remained unfinished. (I hope he had a wonderful honeymoon!) Here's the progress through the days before his wedding. We'll wrap this up next time — in part 46c.

As of the time I wrote this blog entry, June 10th, he's back in town; he posted on Facebook that he's "so close," and the mural looks basically finished to me. (He told me in April that he'd planned to finish painting before the heat got too bad. Sorry, Joe… ;-))


Since our first entry, which appeared on the blog on April 10th, Joe has made progress. Let's start with April 12: his van, some visitors (he said he gets a lot of visitors), and (at the right edge) the part of the mural we've been following: the javelina on the bicycle at the right edge: 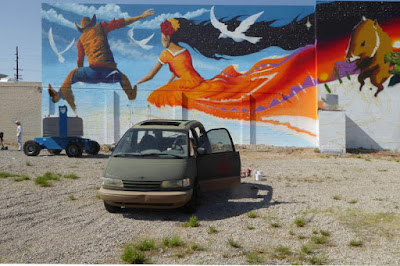 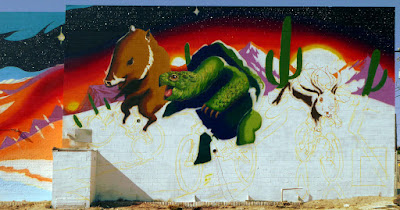 And the javelina's bicycle, photographed diagonally (at the same angle as the bike): 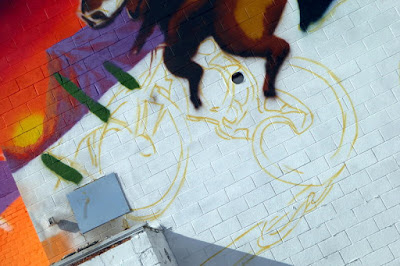 Four days later, on April 16th, I found Joe drawing the skyline near the left edge, underneath the cowboy: 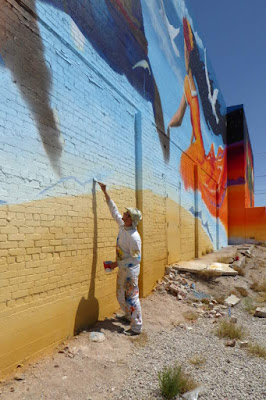 I stepped back quite a way to catch the whole left half. Joe is still on the ground, on the other side of the lift, painting the left edge. This gives you an idea of the scale of the mural (!):

Now the right side on that same day, April 16. It looks like he's painted over the three bicycles; the outlines are gone: 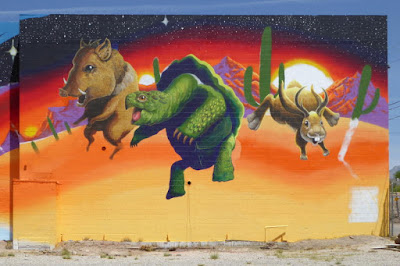 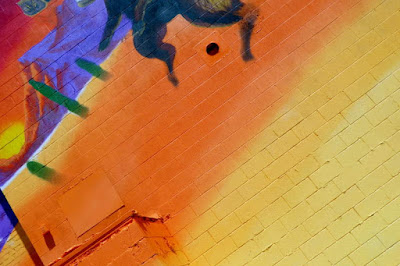 David Aber stopped by on April 17th. Here's his photo of the whole mural from (his photo data says) just before 2 pm:

Let's wrap up Joe's April work with photos from the 25th — three days after he left for his honeymoon. First, the whole mural: 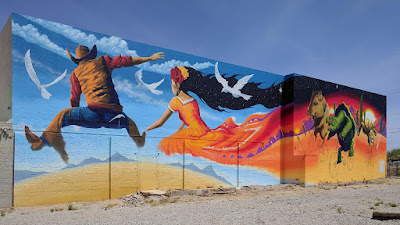 The cowboy without his "buckin' bike": 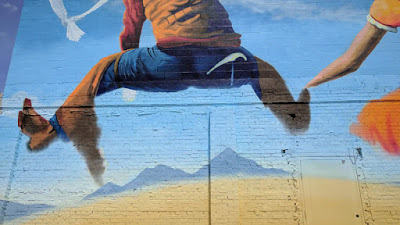 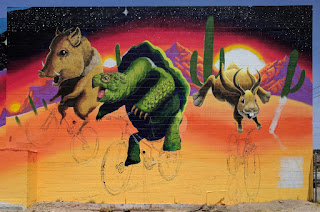 We'll end this entry with two details from the right side: the jackalope and the javelina, both with their ghostly bikes (which will be filled in during May): 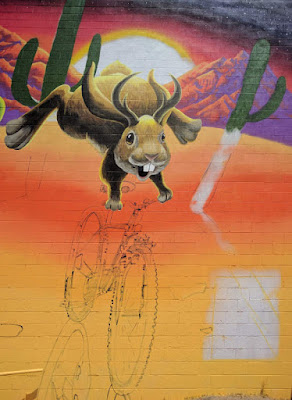 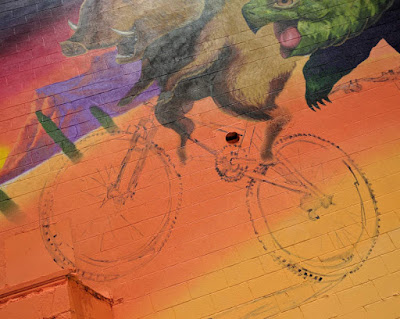 (The javelina is jumping its bike onto a part of the building that extends a few feet away from the rest of the wall. Very fun!)

Part "c" — the last part of the painting, after Joe's honeymoon — should be online in a week or so. See you then!