This mosaic is on the front of Peppi's House.  It is the Tucson Medical Center's Hospice.

The "house" is named for Rose "Peppi" Grosse, a philanthropist who volunteered at TMC before developing cancer and enrolling in TMC's hospice program. One of her final decisions was to donate $1 million for a new hospice building. She was 73 when she died on May 22, 2000. 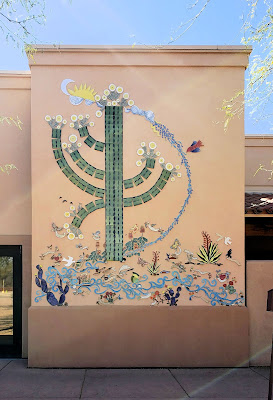 Click for a larger and sharper image.
Our January 12, 2012 entry, also named Peppi's House, shows an earlier version of the mural and two other murals nearby.
Posted by David Aber at 6:01 AM