A history of Joe Pagac's little man on the Rialto

I've been working again on my never-ending project: sorting through a backlog of photos I've taken. I found a folder that I made some time ago — but never posted here, I think. It shows a man standing to the right side of the murals Joe Pagac has painted and re-painted for at least ten years. The first Rialto mural we showed on this blog — without the man — was photographed December 13, 2009. 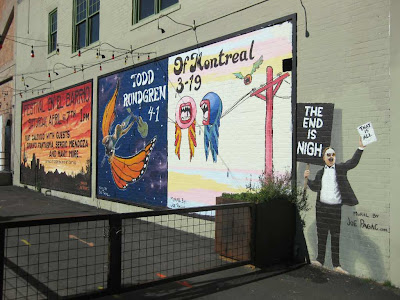 After a while, Joe replaced the protest sign with a monkey and the man both holding onto a banana. (Notice how both the man and the monkey have a hand or two wrapped around the downspout?) Though I haven't checked this year, I'd guess that's still the way it looks. The shrubbery in the last photo was taken away sometime later.

The “little man” is comedian John Hodgman. They painted it for a show he did at the Rialto a few years ago and they kept him up there.