For this 200th post on the Tucson Murals Project, I wanted to cover David Tineo's well-known Linda Avenue mural. It's huge — 120 feet long, I've read — and hard to find. When I got there yesterday, I spotted it in an overgrown lot, surrounded by a chain-link fence with NO TRESPASSING signs: 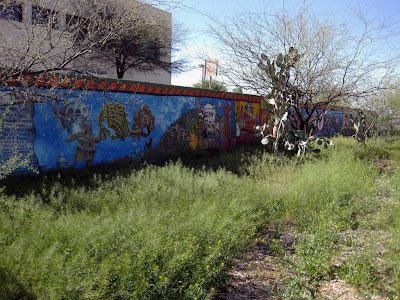 Here are some close-ups (thanks to my zoom lens and the amazing free GIMP photo editor):

You can see that it's worth a visit! Bring your binoculars. :( At least the artists' credits are easy to see. At the bottom of the left-hand panel is Special Thanks to all who Painted! Gracias ‘LaLo’ © 12/2006 – Tineo. 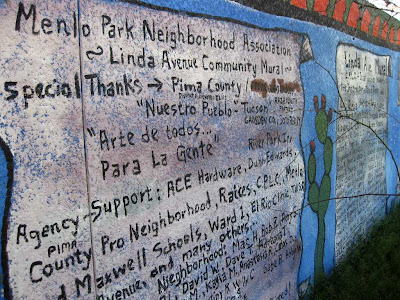 You might think of driving in on Linda Avenue, but the gate there was locked — and far from the mural. The easiest way to see the mural is to drive along Congress a bit west of Linda and take the next right into the El Rio Health Center. There's a wall along the east side of that property. On the other side of the wall is the mural.

(Update: The story of the mural, and much more about David Tineo's life, were covered in the Arizona Daily Star article The end of one chapter in artist's life, by Tom Beal, on December 26, 2006. The article says the mural is actually 200 feet long — appropriate for our 200th post, eh? Tineo didn't choose the images in the mural but guided the neighborhod kids through choosing what they wanted to paint. Some local artists painted the intricate parts, including Fernando Gonzalez at the south end, Ruben Moreno at the north end, and Tanya Alvarez in the center. And it quoted David Tineo as saying that this would be his last mural. His eyesight is failing.)

Update (May 15, 2012): This mural was covered back on March 24, 2008 on the Community Arts and Murals blog. There are great photos, too; the third photo shows the whole mural. The post is Something about Tucson Murals: The Linda Avenue Mural.

Update (October 1, 2014): Here's a story from the archives of the Tucson Citizen: West Side story being told in Linda Vista mural.

I go to the El Rio clinic several times a month and have never noticed the "lost mural". I will be looking for it next time. Thank you for your wonderful blog. I knew there were lots of mural around town but this proves that I need to slow down a little and really SEE Tucson.

I'm definitely going to find this one. I've been down there so many times and have never noticed it.