I'm an early riser… when the weather gets hot, at least. Last week's hot spell and the full moon gave me an idea: head out just before sunrise with my tripod to try photographing spooky murals by moonlight. It didn't work out as well as I thought it might because the streetlights in the area I picked — Toole Avenue and north on Stone — were a lot brighter than the moon. But the photos were spooky.

First, here's a shot with the full moon in the sky behind this mural-covered building at Council & Toole. (Also check out the daylight version.) 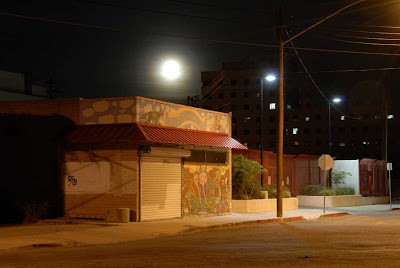 Across Toole, on the side of the building that's recently become the new home of the Tucson Youth Collective (usually called Skrappys), is this bizarre collection of scenes from Tucson and somewhere in the Universe (which you also can see in daylight): 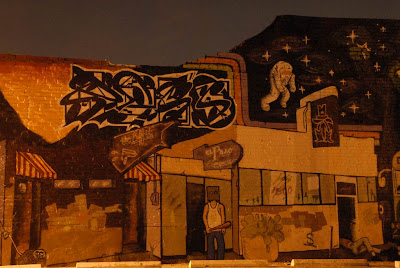 North on Stone, just north of the corner of Speedway and Stone (1122 N. Stone), is a mural that's colorful in daylight but eerie in moonlight/lamplight: 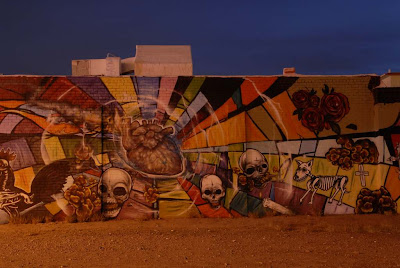 This was a long time exposure — a minute or so — which gave me plenty of time to walk in front of the mural and paint the skulls with a flashlight to make them brighter (as Tucson photographer Stu Jenks might have done). As always on this blog, you can click on any photo for a larger view.
Posted by Jerry Peek at 8:02 PM