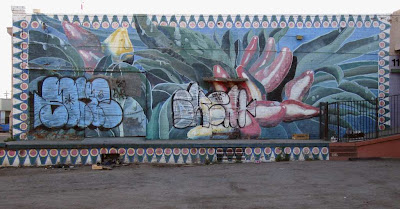 Instead of garbage, there's graffiti. I've wondered whether there's some kind of tagging-resistant overcoat that muralists could paint onto their work when they're done -- like the graffiti-stopping paint that's used on some downtown walls? It's too late in this case, I'm afraid...